The quaint seaside town of Oceanside is 2-hours west of Portland on the Oregon Coast.

Oceanside is a true gem, with a secluded hillside setting beside a dramatic headland.  The main street has a village-like atmosphere, with a small selection of lodging, and only one restaurant and café.

Oceanside is for visitors looking for a quieter Oregon Coast experience than the bustling towns of Cannon Beach or Manzanita.

Take long walks along Oceanside's breathtaking sandy beach, one of the most spectacular beaches in Oregon, or gaze out across the ocean to the Three Arch Rocks Wildlife Refuge, supporting thousands of murres and tufted puffins.  Whale sightings are also common.

An unexpected surprise at Oceanside is the man-made tunnel at the north end of the beach, leading to a wild surf beach with volcanic black rocks.  Hear the rocks rumble as the waves crash against them.

There's only one cafe and restaurant.

A visit to Oceanside's only café, the Blue Agate Cafe, will become part of your morning ritual, and has lovely beach views and a relaxed, welcoming atmosphere.  A short distance down the road, Roseanna's Café has an excellent reputation for gourmet food, and is perfect for lunch or a romantic dinner with beach views.

Places to stay in Oceanside Oregon. Oceanside Oregon has a lovely sandy beach, looking north towards the Maxwell Point headland.  This basalt headland was formed during the Miocene epoch, 5 to 23 million years ago. In the early 1900s, shooting parties in leisure boats would hunt these birds every Sunday.  President Theodore Roosevelt eventually passed legislation in 1907 to prevent this activity, protecting over 1,400 offshore rocks along the Oregon Coast as part of the Oregon Islands National Wildlife Refuge. 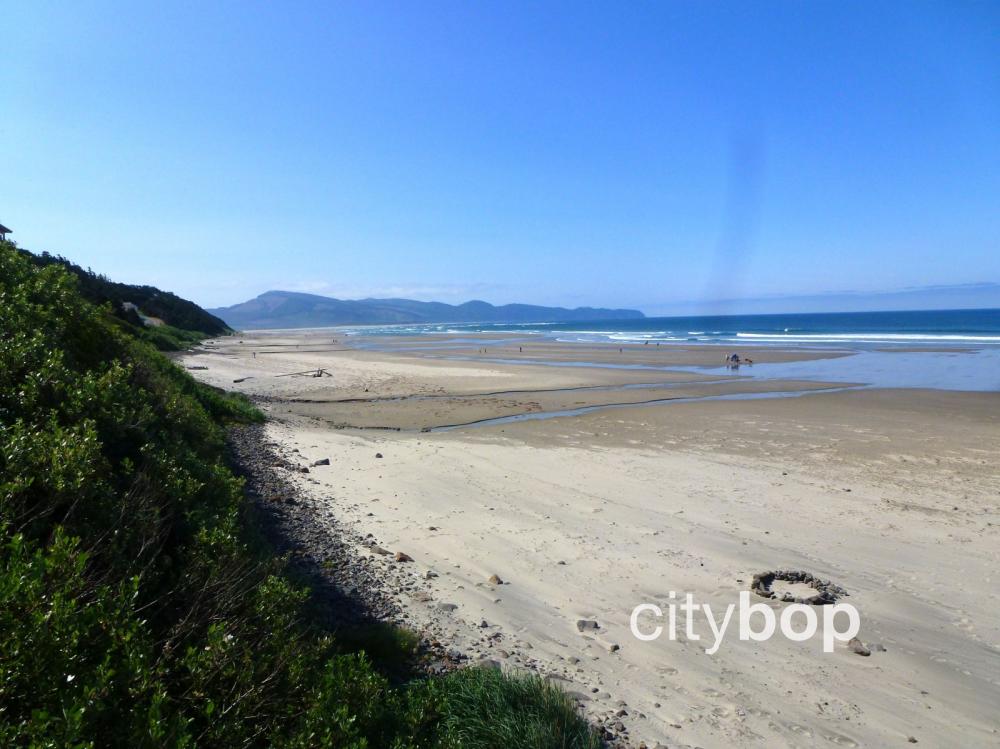 The views south from Oceanside Oregon, are towards the Cape Lookout Headland, and the entrance to Netarts Bay. Oceanside Oregon is a quiet town, with lots of retirees and a few vacation rentals and inns. The surrounding hillside is lined with homes. Explore enchanting rockpools in the translucent waters near Oceanside. The sleepy town of Oceanside Oregon has a post office, cafe and restaurant along Pacific Street, overlooking the ocean. This is the spectacular view of Oceanside from Maxwell Point.  The entrance to Netarts Bay is clearly visible from this vantage point. The Oceanside Inn has cute, renovated cottages to stay in, with a lovely view deck. There's a convenient parking lot just off Pacific Avenue, on the Rosenberg Loop.  On colder days you can sit here in your car, and watch the storms roll in. The Blue Agate Cafe (formerly Brewin in the Wind) serves a scrumptious breakfast.  Sit by the window inside this charming cafe, and watch the passing parade of grey whales.  Best viewing times are December to January, and March to May. Roseanne's Cafe has an oceanfront dining room, with a scrumptious selection of food, cocktails and desserts.  Another option is the Schooner Restaurant, 3-miles south of Oceanside at Netarts.  It has a wonderful patio with water views, and lots of delicious comfort food. If you're looking for some adventure, make your way through the tunnel carved at the base of Maxwell Point, leading to Tunnel Beach. The tunnel was carved out in 1926 by the Rosenberg brothers, the founders of Oceanside Oregon.  They had originally envisaged Oceanside as a resort community, with a major hotel on top of Maxwell Point, modeled on the Cliff House in San Francisco. The brothers constructed a dance hall, grocery story and inn, and a 3-mile wooden plank road all the way south to Netarts. Stroll all the way south from Oceanside up to the entrance of Netarts Bay, a lovely 2-mile walk. Most lodging at Oceanside Oregon has a view of the Three Arch Rocks, named Shag, Finley and Storm Rock. While staying in Oceanside, don't forget to take the spectacular 20-mile Three Capes Scenic Drive through Cape Meares, Cape Lookout and Cape Kiwanda, as an alternative to highway 101: