Visit a spectacular beach with a waterfall, on the Oregon Coast.

Oswald West State Park is 1.5 hours west of Portland, between the upscale coastal towns of Manzanita and Cannon Beach.

There are three Day Use parking lots at Oswald West State Park, directly off the Oregon Coast's Highway 101.

The crown jewel of this park is magnificent Short Sand Beach inside Smuggler's Cove. It has a secluded location between two headlands, and can be reached by walking 20 minutes along a creek trail.

The Oswald West State Park campground has been closed since 2009, so stay at nearby Manzanita or Cannon Beach.

10 best things to do at Oswald West State Park 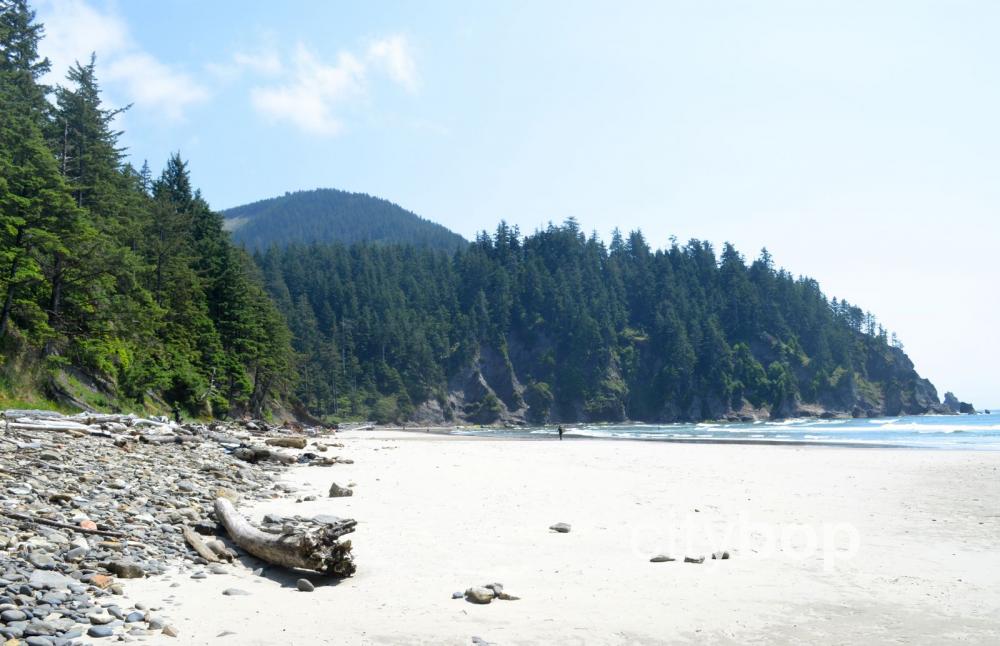 1. Take an easy 20-minute trail out to Short Sand Beach.

You have a choice of two easy trails out to Short Sand Beach at Oswald West State Park. The North and South Trailheads are both 20 minutes long, and perfect for families. 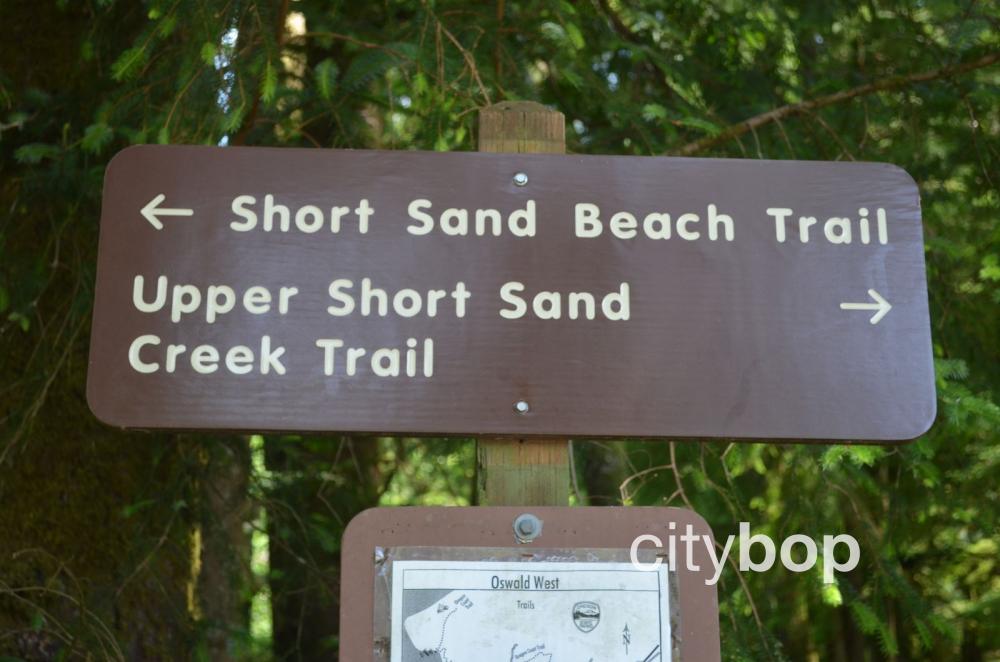 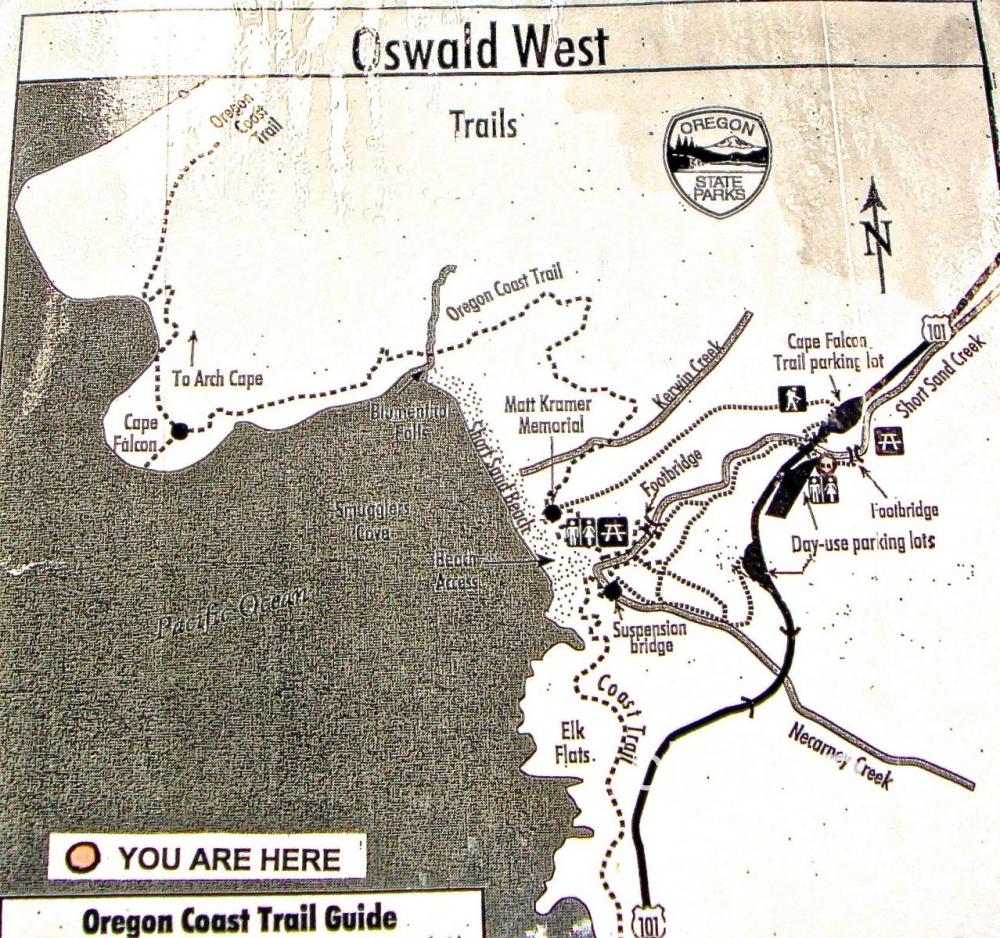 The prettiest trail to the beach follows Short Sand Creek. Can you see it on the map? 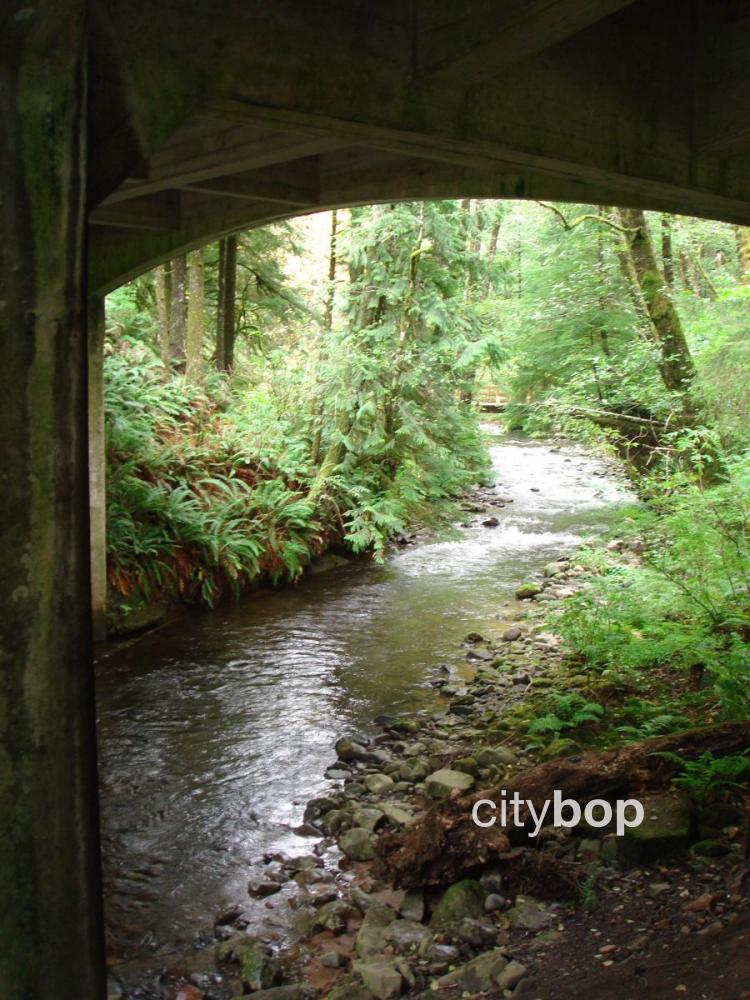 The trail begins beneath the highway 101 bridge, and travels along Short Sand Creek. 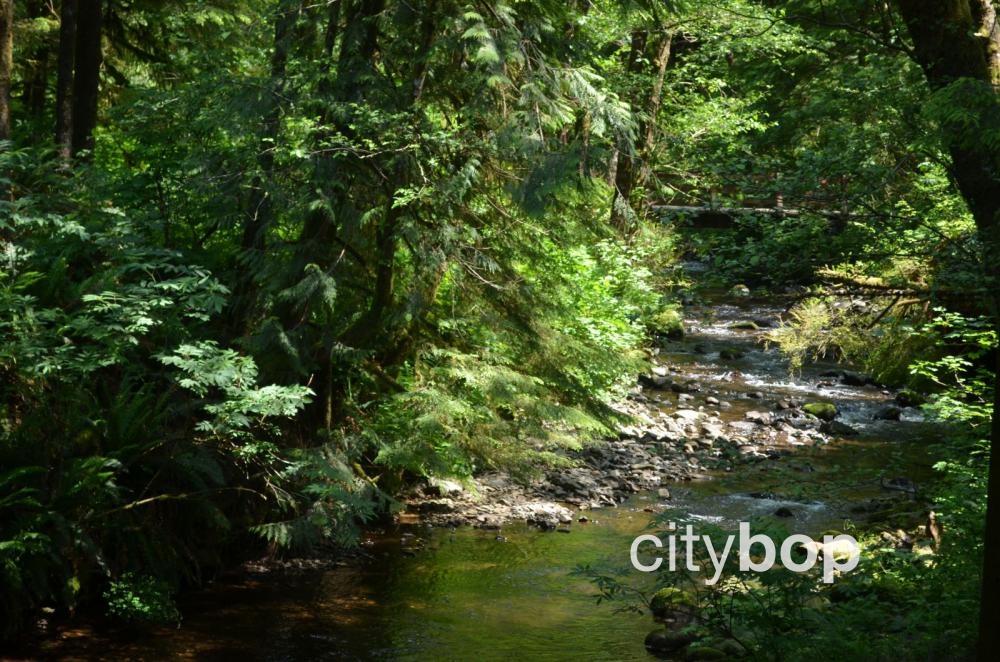 The trail continues along picturesque Short Sand Creek for 20 minutes, before it ends at the ocean. 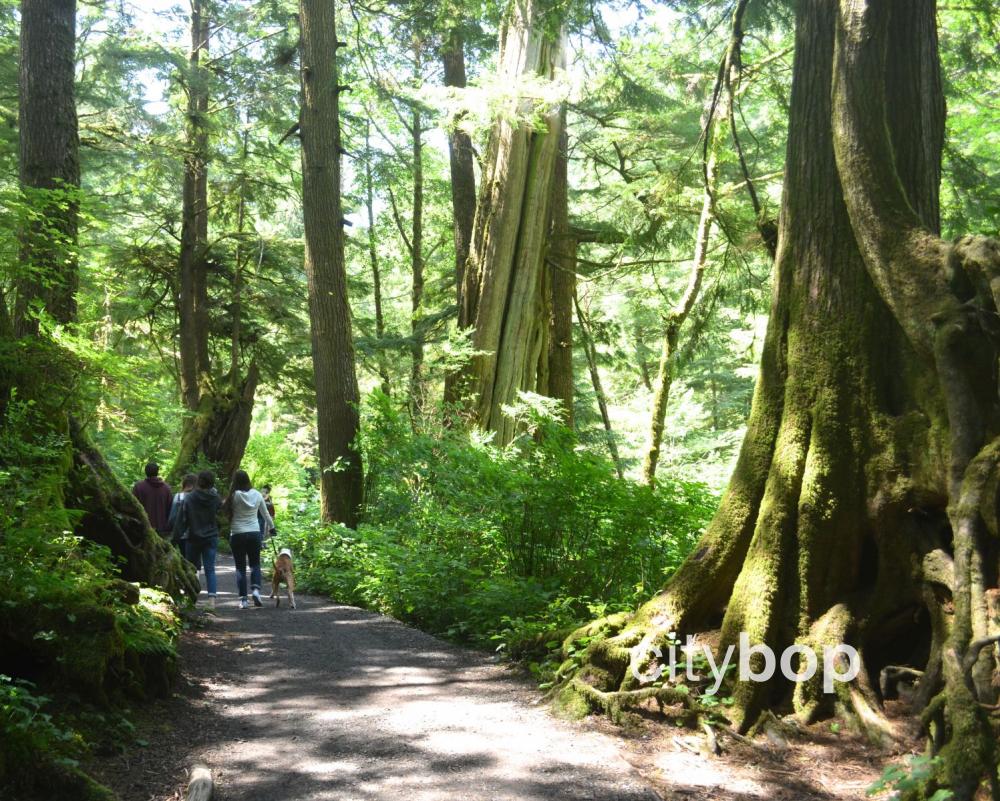 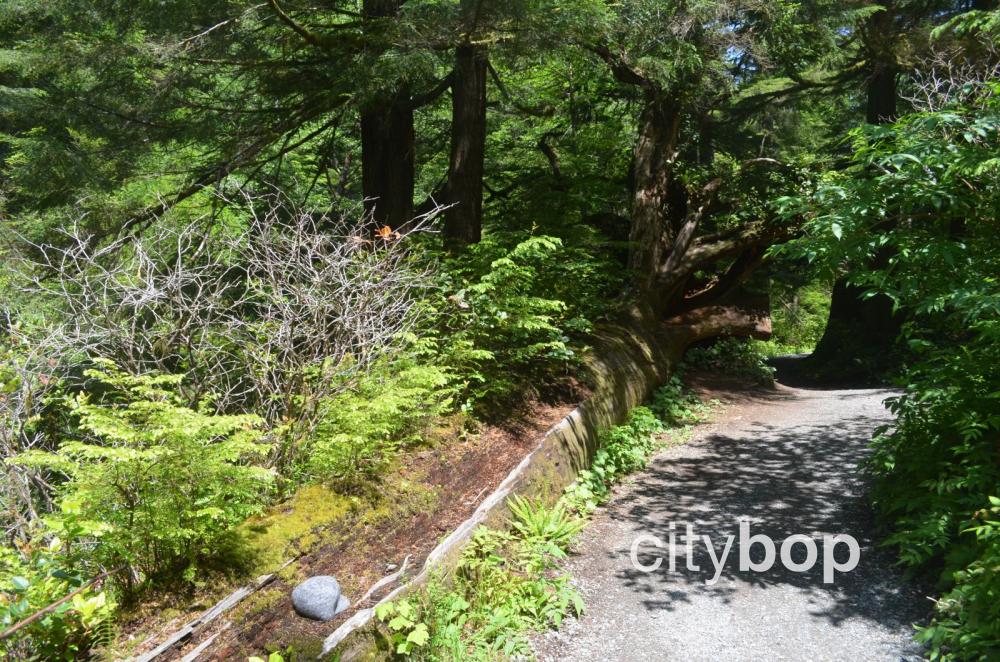 Find decaying nurse logs, hosting a variety of other plant life in the forest. 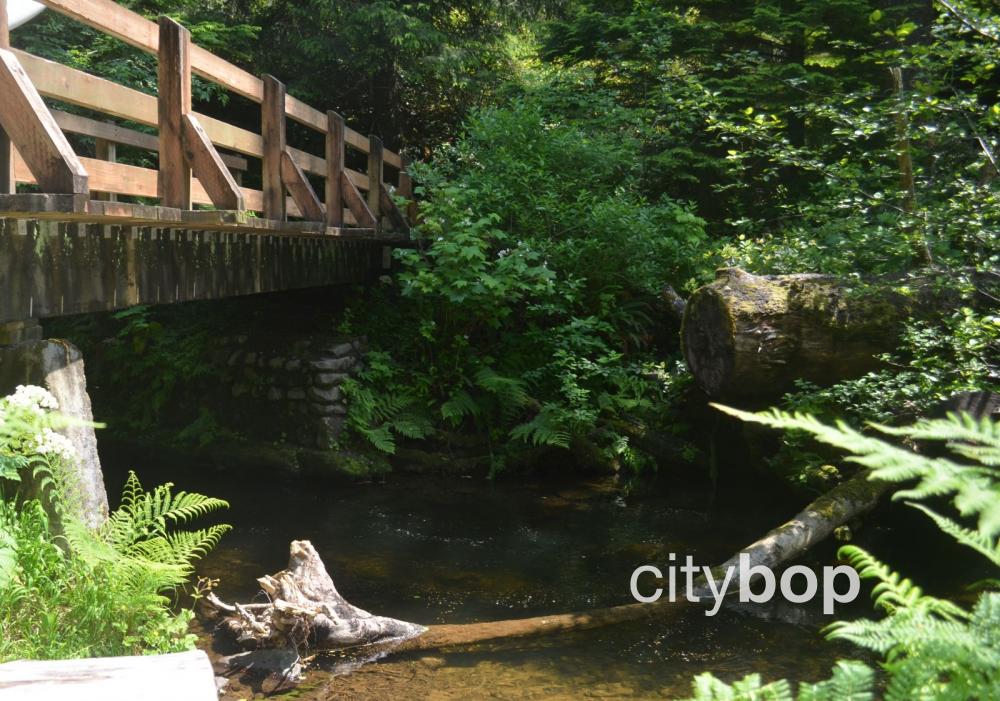 Cross the wooden footbridge across the verdant creek, lined with lush ferns and vegetation. 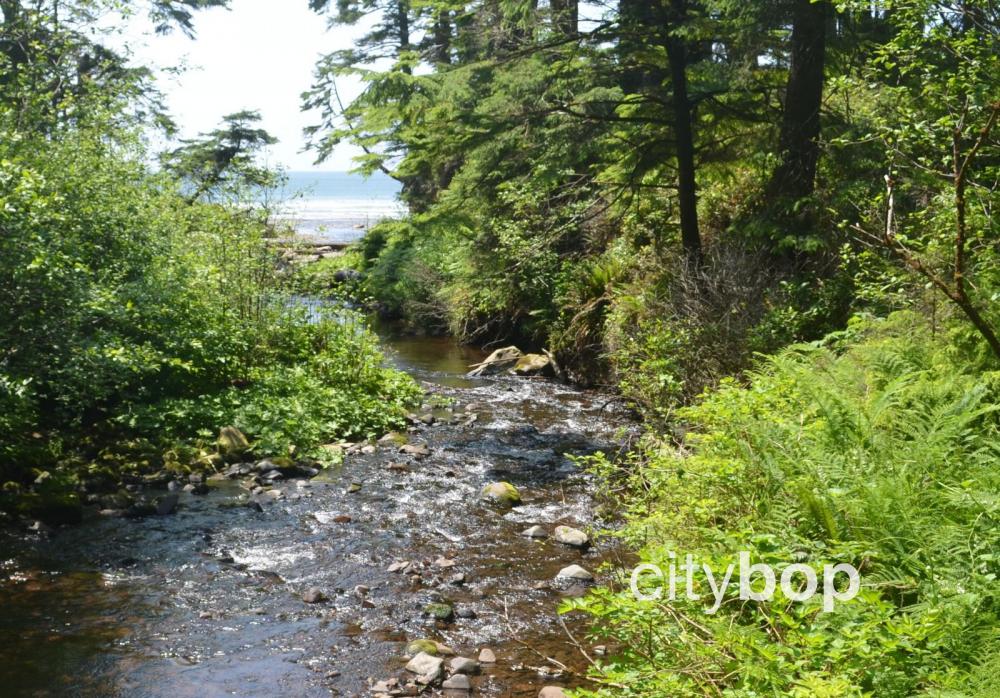 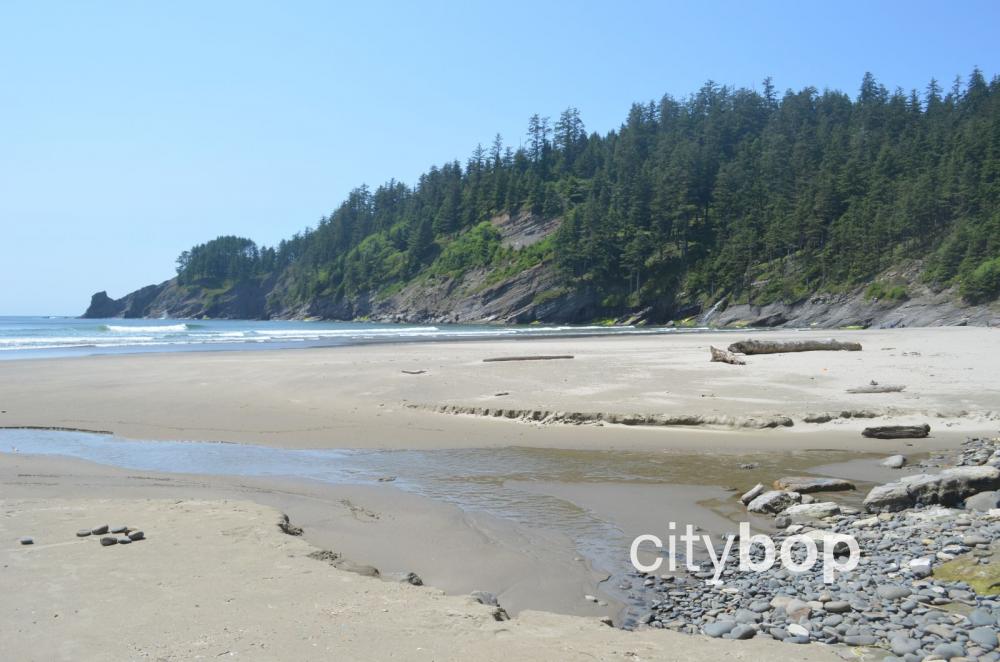 You have now arrived at beautiful Short Sand Beach!

2. Stroll along the 1-mile length of Short Sand Beach. 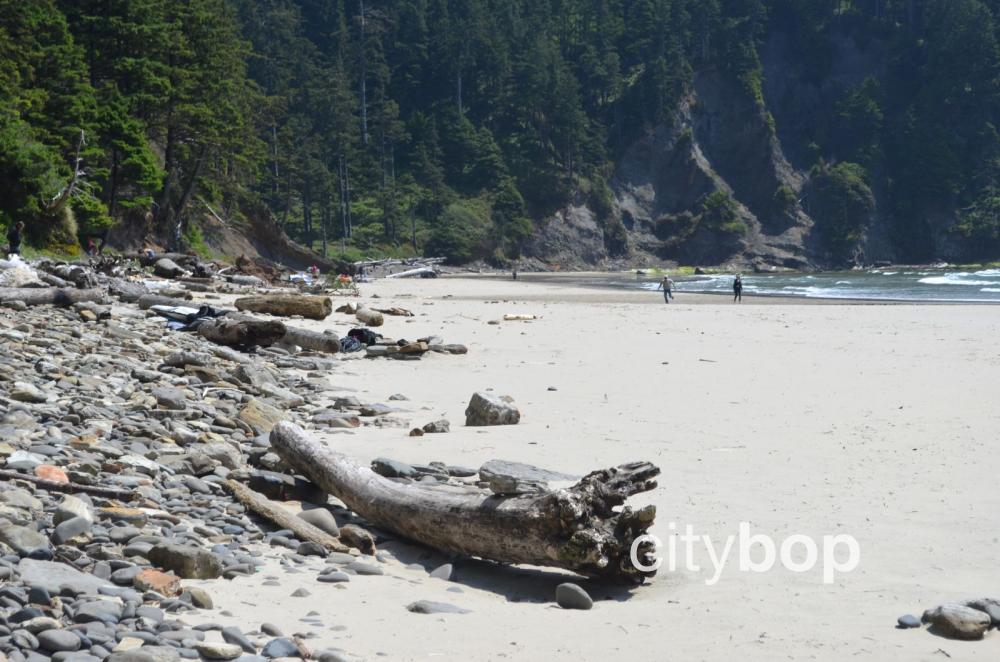 3. See a dramatic beach waterfall at the north end of Short Sand Beach. 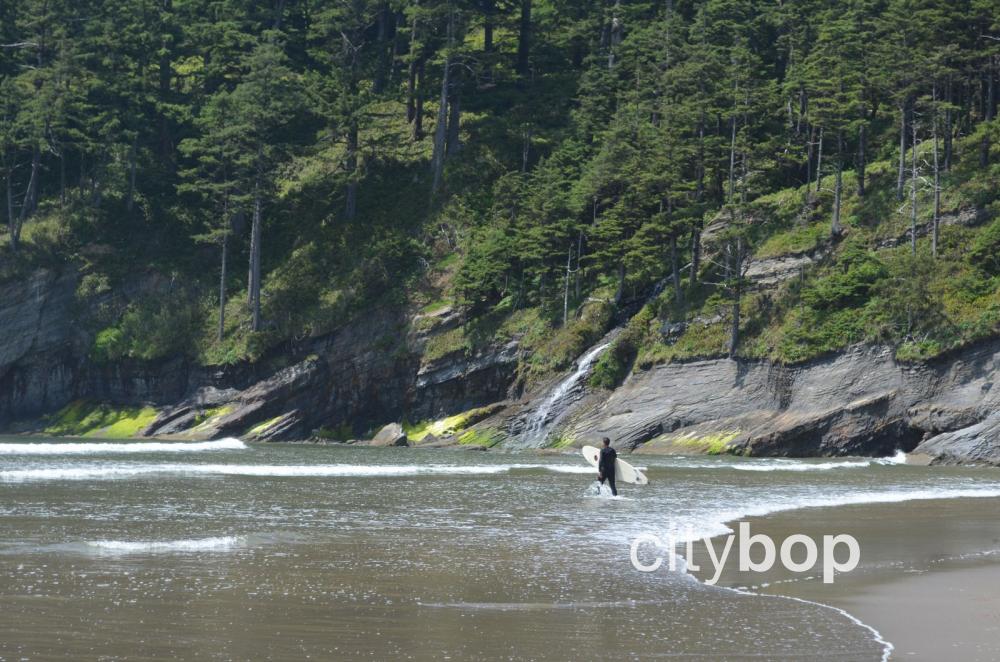 4. Watch surfers in the chilly waters of Short Sand Beach at Smuggler's Cove.

Surfers brave the chilly waters in one of the most popular surf beaches in Oregon, at Oswald West State Park. Short Sands Beach has an exposed surf break and consistently good waves.  However, it isn't suitable for swimming and there are no lifeguards. 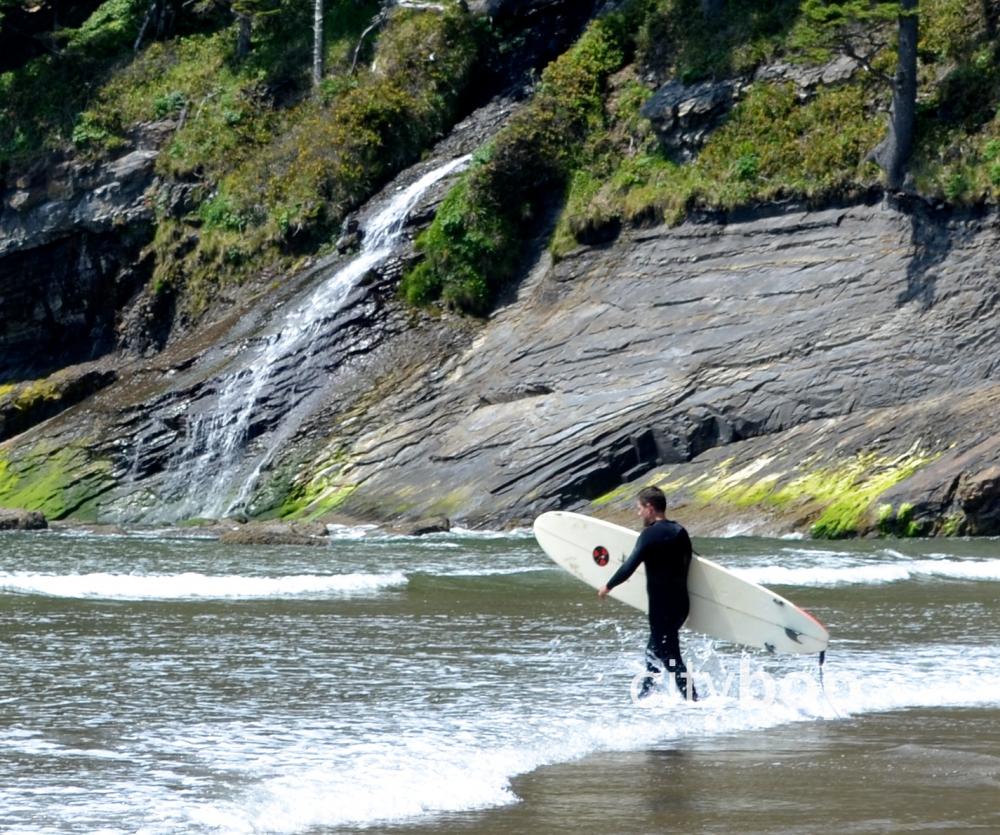 5. Hike out to the Cape Falcon Overlook to enjoy panoramic views.

More seasoned hikers looking for a challenge, can take a 4.5 mile (roundtrip) hike out to the Cape Falcon Overlook at the north end of Short Sand Beach, with panoramic coastal views of Smuggler's Cove and Neahkahnie Mountain.  Most of the hike is through old growth forest with Sitka Spruce and Salal, and ends at the stunning ocean overlook.  The path can be a bit rough in sections, with lots of drop-offs and a steady incline. 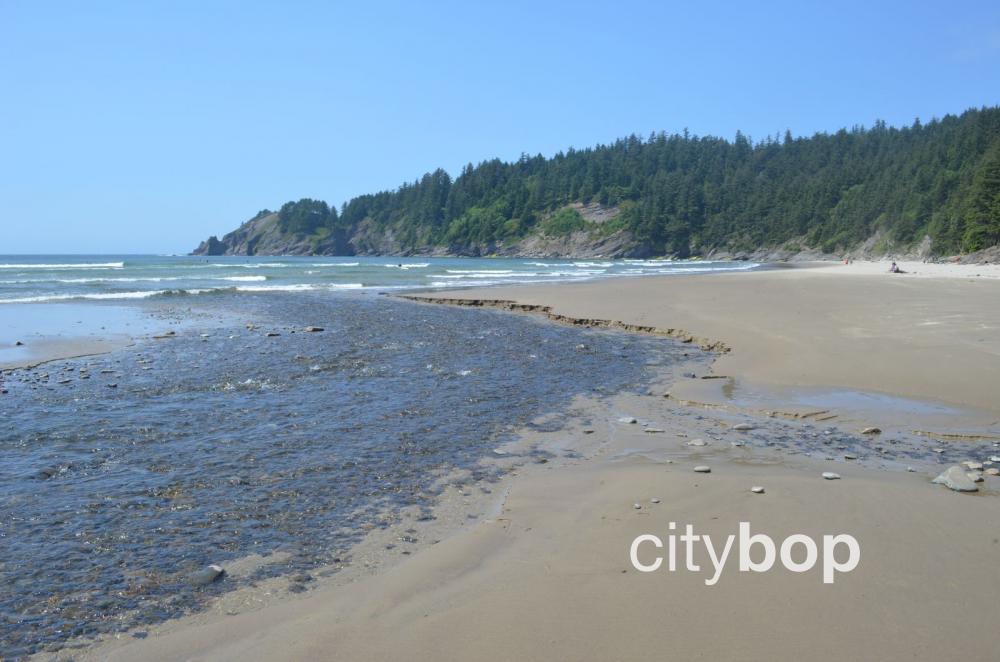 6. Look down the southern end of the beach to see massive Neahkahnie Mountain.

Neahkahanie Mountain is the tallest headland on the Oregon Coast, rising 1,680 feet. The coastal highway actually wraps around this mountain, descending south towards the township of Manzanita, and the views along this road are incredible! 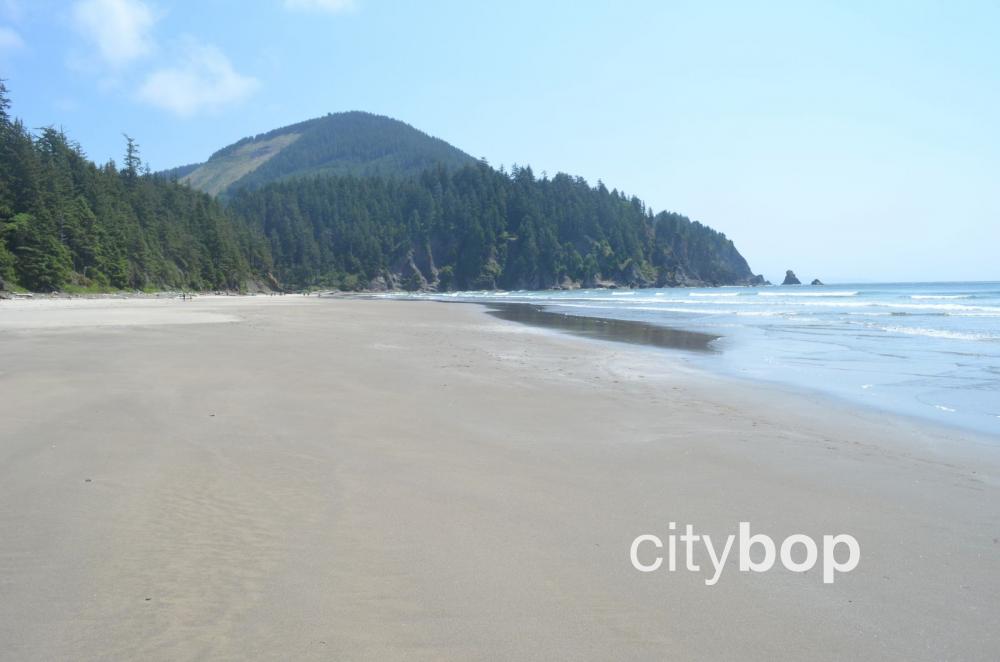 Look more closely at the beautiful patterns etched in these sheer cliffs in this dynamic landscape. 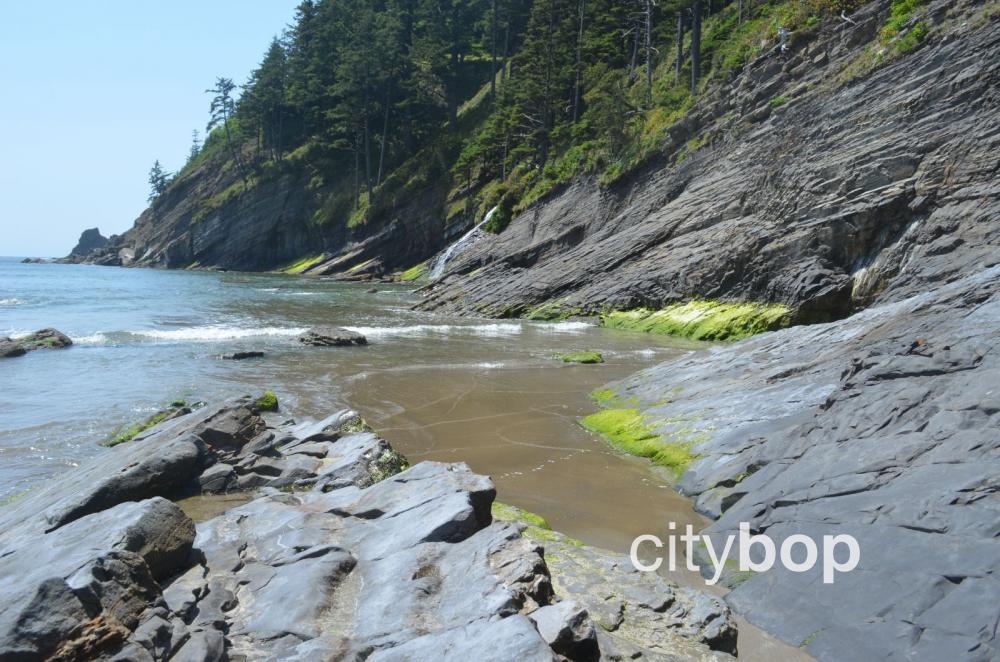 8. Explore the giant logs washed up on the sand, bleached by salt water. 9. Find 3 different creeks that empty into Short Sand Beach from the Coastal Ranges.

Dip your feet in the three creeks, Short Sand Creek, Kerwin Creek, and Necarney Creek, that cut across the beach on their way to the ocean. 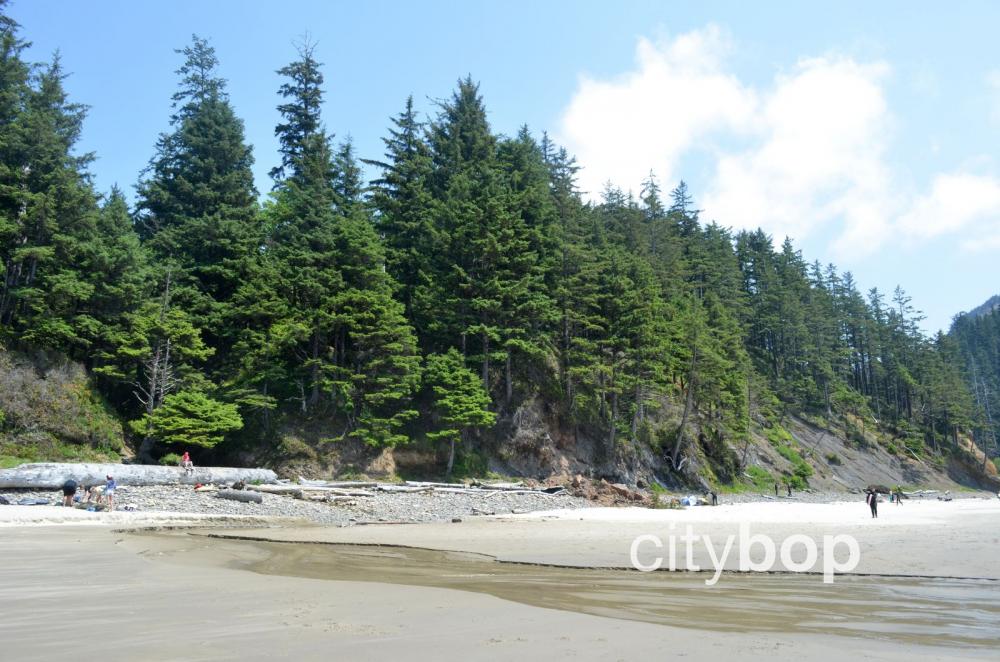 Other fun things to do near Oswald West State Park

The charming seaport town of Astoria is also worth a visit, with waterfront restaurants like Buoy Beer, and fabulous attractions including a world-class Columbia River Maritime Museum, and the Astoria Column that you can climb to the top of.

Some other popular parks in the area include Fort Clatsop where explorers Lewis and Clark spent the winter of 1805-1806, and the shipwreck at Fort Stevens.