The historic Cannery Row is bustling with restaurants, gift shops and a world class aquarium.

The canneries thrived here until the late 1950’s, when overfishing resulted in the collapse of this industry.  The township now has a thriving tourist industry after the canneries were converted into restaurants and retail.

10 BEST things to do at Cannery Row

Start at San Carlos Beach Park, and enjoy spectacular views over Monterey Bay.  There’s a lovely grassed lawn area with picnic tables and a restroom.  The sandy beach is easily accessible down a flat ramp.  Parking lots are directly behind this park.

2. Charming waterfront overlook with steps to the beach

Continue north up Cannery Row from San Carlos Beach Park to a narrow waterfront overlook, just before the Monterey Plaza Hotel and Spa.  It has a quaint, cottage garden, with steps down to the beach. 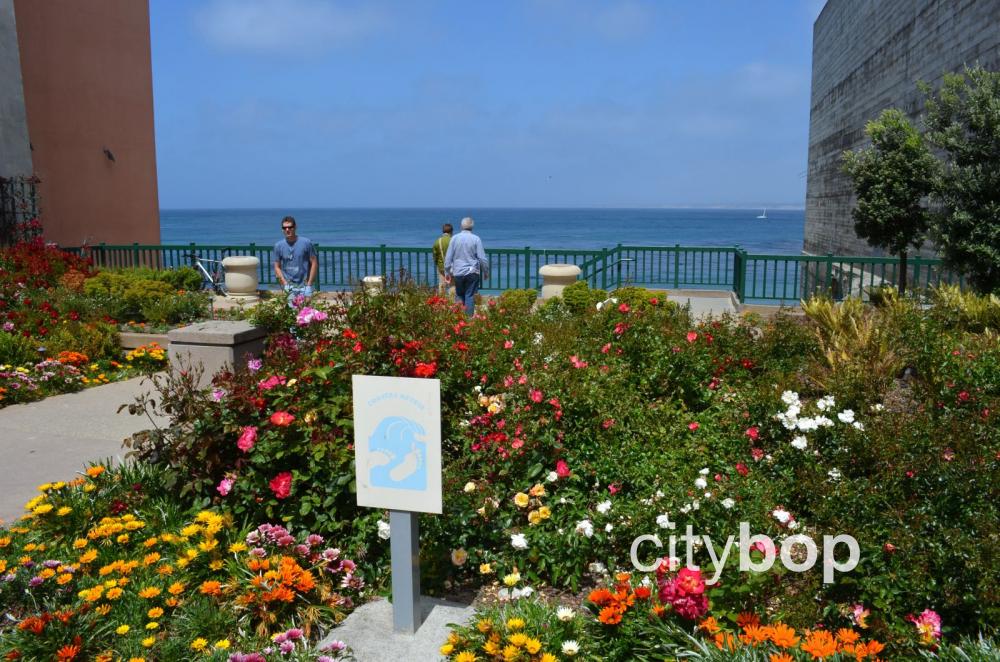 This is the brightly, colored cottage garden along Cannery Row, that leads to the beach.  The beach overlooks the patio for Schooners Restaurant, at the Monterey Plaza Hotel & Spa. This is an other perspective of the beach, with the old canneries in the background. 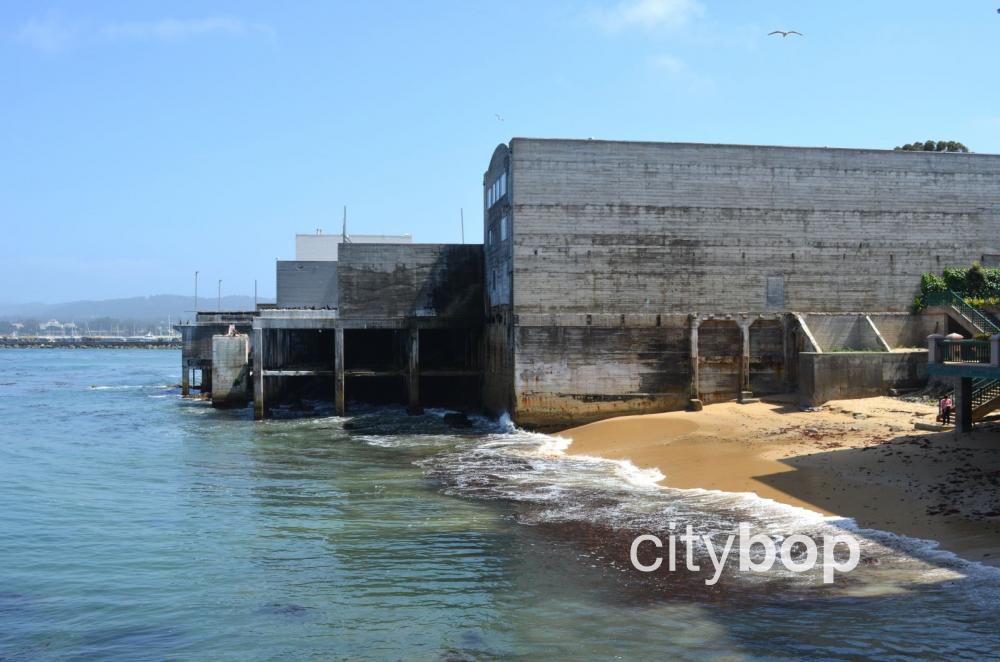 A short distance up Cannery Row, you’ll see the expansive upper balcony of the Dolphin Plaza. It's within the complex of the Monterey Plaza Hotel and Spa. 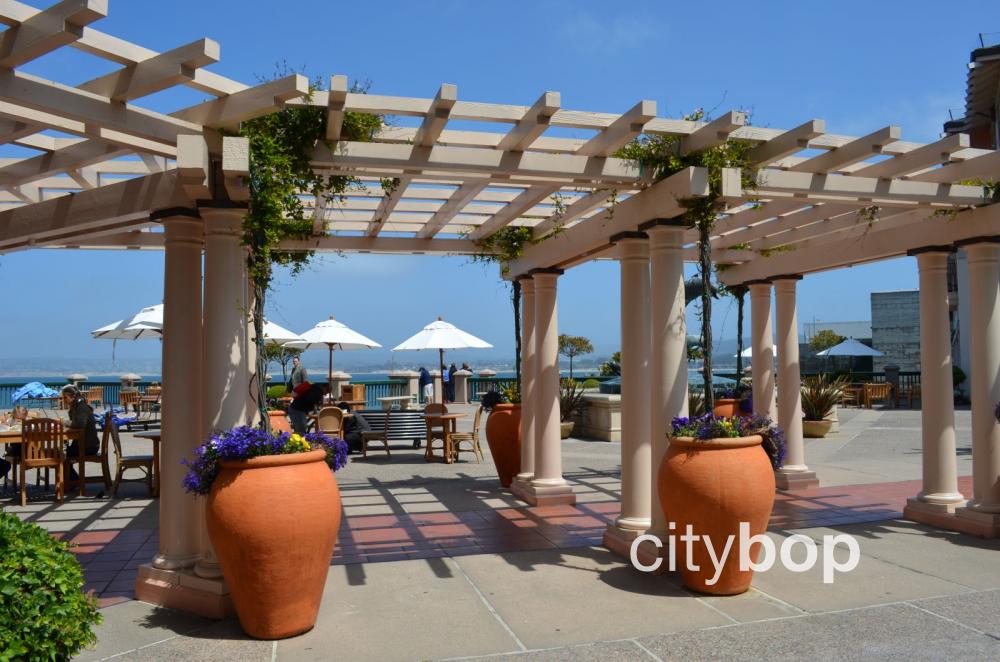 The Dolphin Plaza is identifiable by an assortment of orange pots, and a fountain with dolphin sculptures.   Grab a coffee in this plaza and peer out at the turquoise waters. 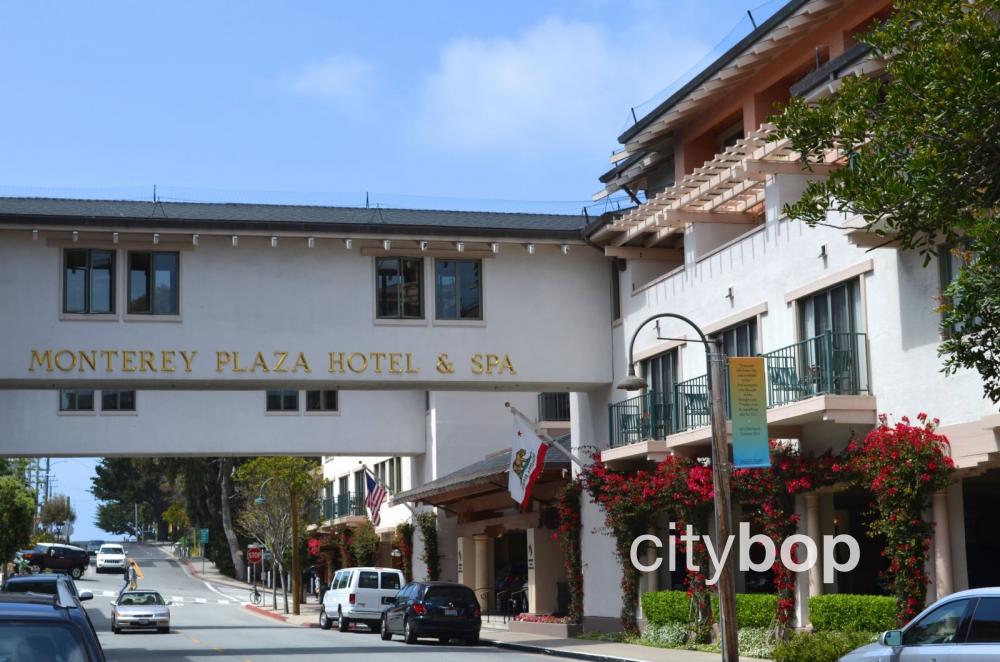 The Dolphin Plaza is just past the crossover to the Monterey Plaza and Hotel, along Cannery Row. 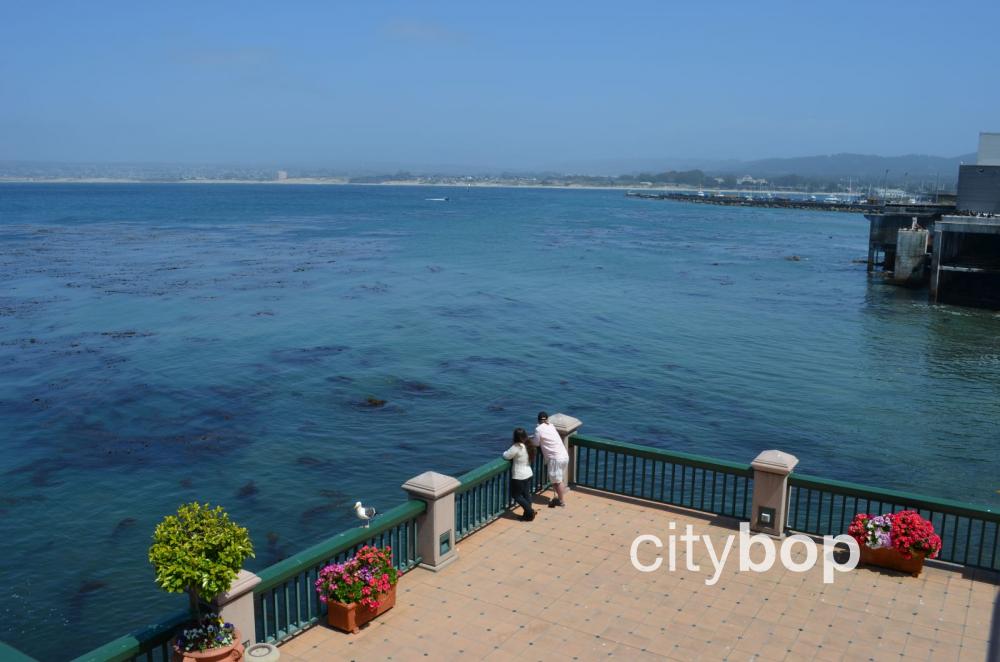 Take the stairs to the lower balcony at Dolphin Plaza. Peer down at the water for possible sightings of sea otters and dolphins. Look across at the waterfront terrace at Schooners Restaurant. 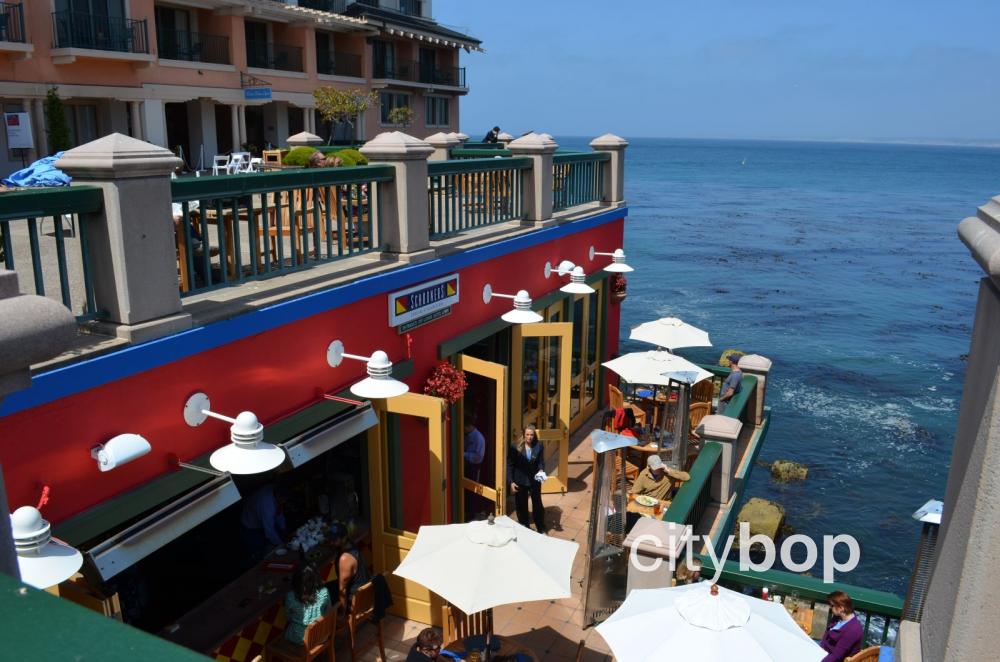 4. Fascinating ruins from the Old Canneries

Walk up Cannery Row past the old cannery ruins, now reduced to just concrete foundations.  There are information boards, detailing the history of these once flourishing canneries. 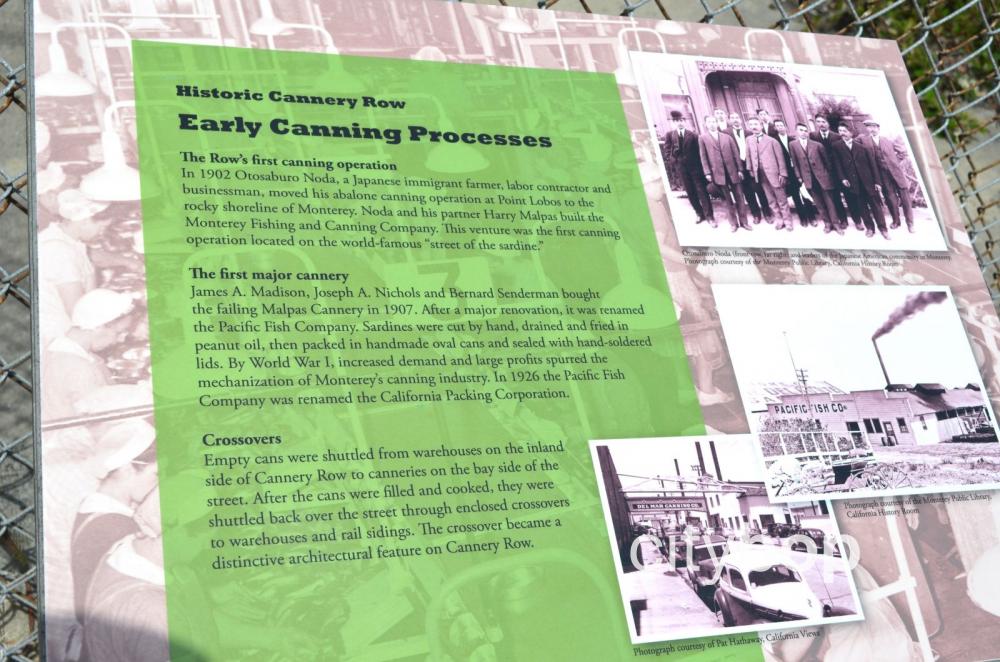 The canneries packed an incredible 250,287 tons of fish in the early 1940s, but then collapsed by the late 1940s due to overfishing. 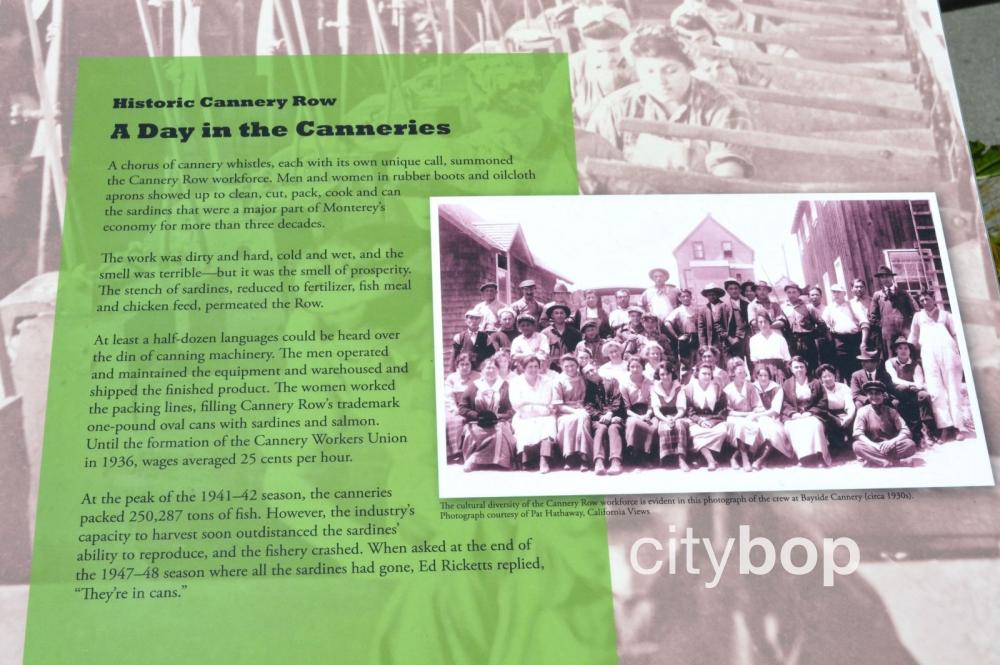 The next stop along Cannery Row is bustling Steinbeck Plaza, overlooking McAbee Beach.  The beautifully landscaped plaza is bursting with shrubs and flower plantings, and flanked by numerous waterfront restaurants. 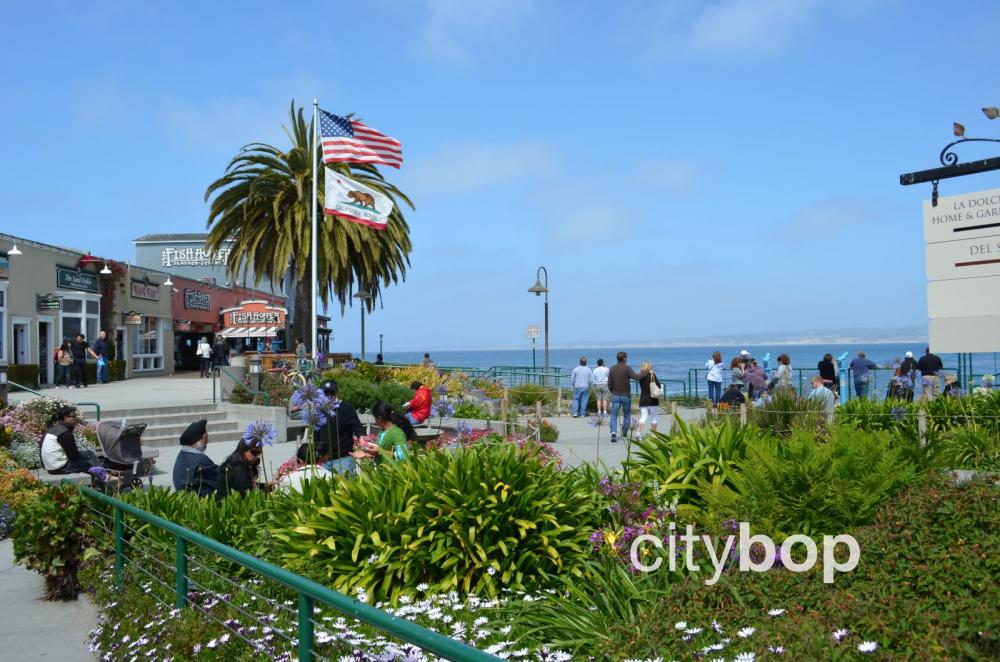 Steinbeck Plaza has a statue as it’s centerpiece, depicting key figures from Monterey’s history sitting on a rocky outcrop.  The nine bronze figures include John Steinbeck at the top, and his marine biologist friend Ed Ricketts, at the bottom. 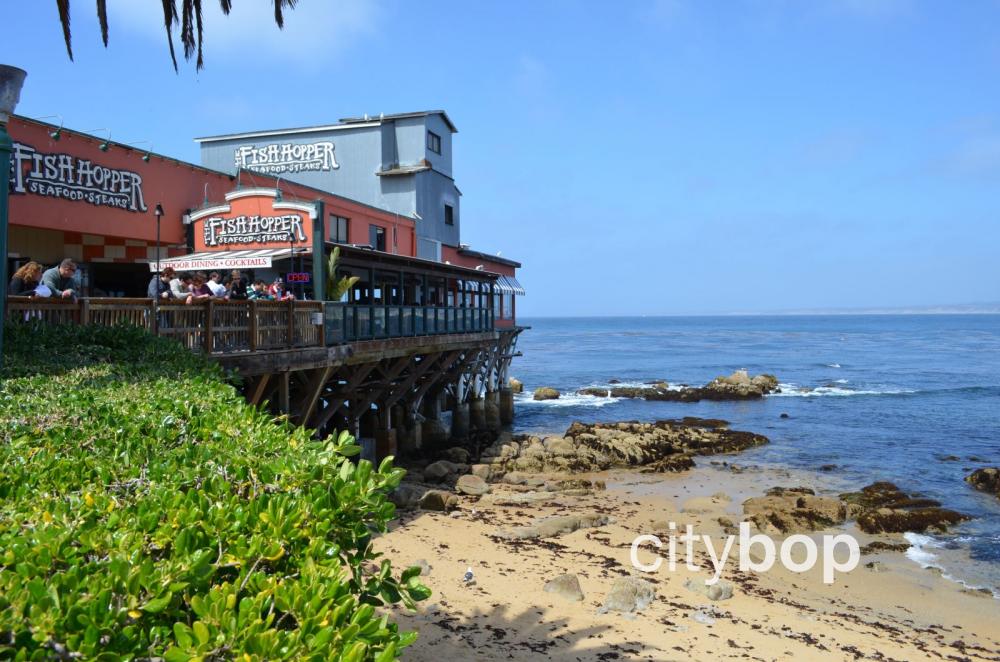 Take the stairs from Steinbeck Plaza down to McAbee Beach, and sink your feet in the soft sand.  This is the loveliest beach along Cannery Row. Next, walk under the prominent red Monterey Canning Co. skybridge.  These sky bridges were used as a connection point between waterfront canneries and the warehouses.  At one point there were 16 sky-bridges along Cannery Way! 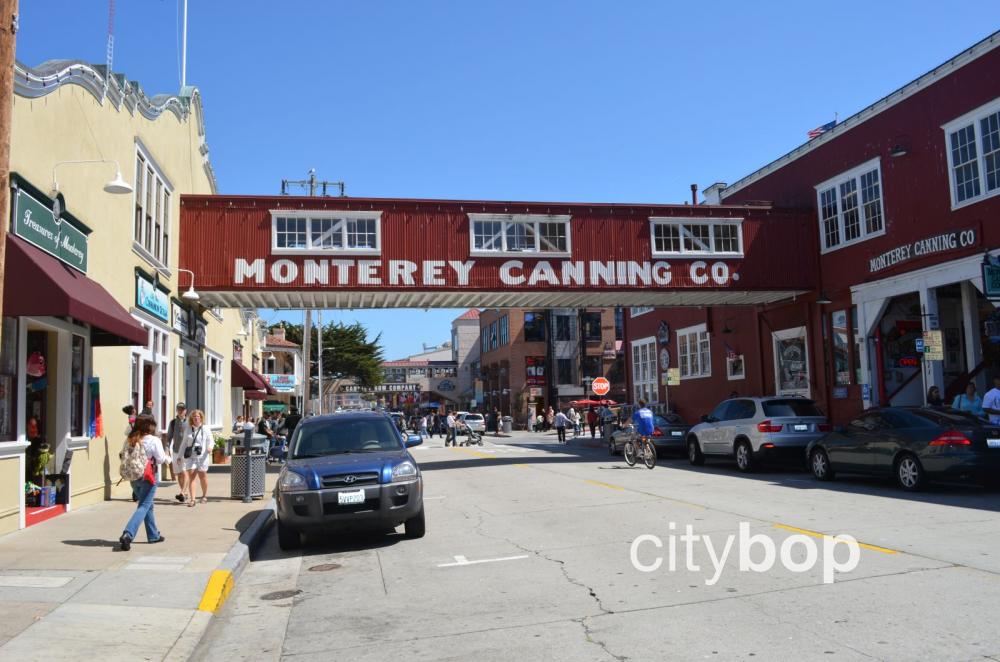 This is the Monterey Canning Co. skybridge.  These famous crossovers were used to transport empty cans from the warehouses (on the right) to the canneries on the waterfront (left), where they were packed with fish, then sent back to the warehouses. Step inside the Old Monterey Canning Company built in 1918, for a small selection of shops and coffee. 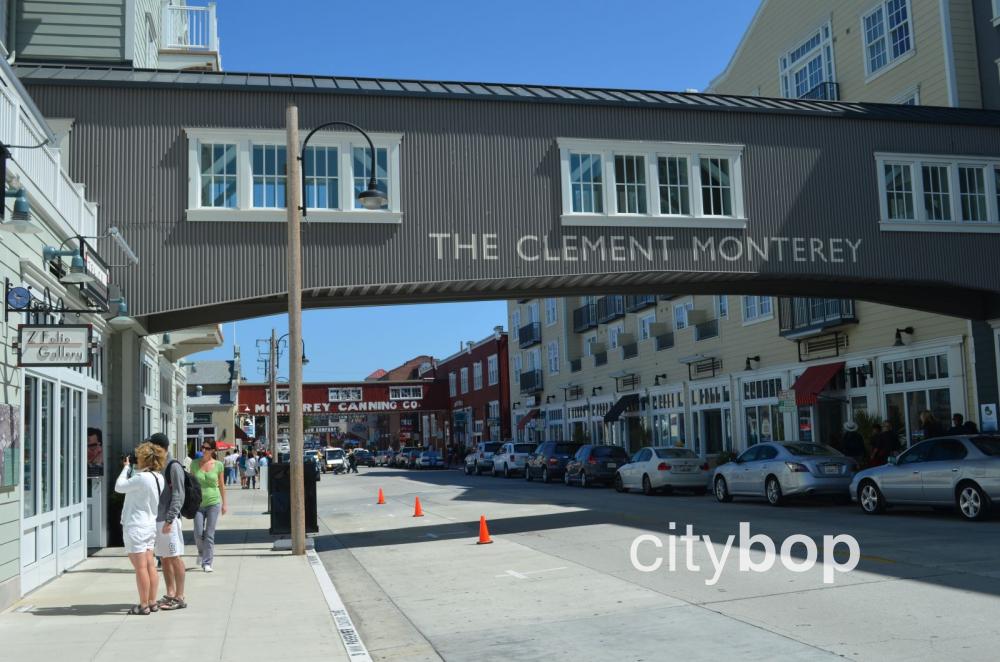 This overpass leads to The Clemente Monterey, a luxury hotel.

Just before you reach the Monterey Bay Aquarium, you’ll discover a cluster of buildings featured in Steinbeck’s book.  The simple, wood paneled building of Pacific Biological Laboratories (800 Cannery Row) was marine biologist Ed Rickett’s home, fictionalized in the book.  From here he collected and sold laboratory specimens, and was a pioneering figure in marine research. This is the Pacific Biological Laboratories (800 Cannery Row), fictionalized in Steinbeck's Cannery Row book, which captured the vibrant era of the Monterey canneries in the 1930s and 1940s. 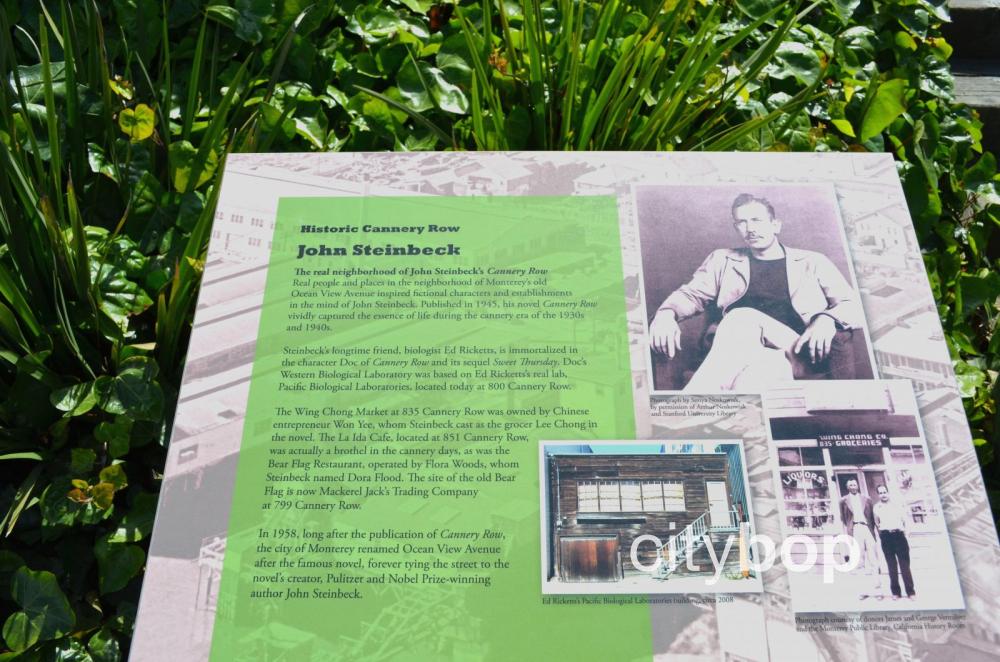 Directly across the road from the laboratory is a cluster of three historic Chinese Fisherman cottages.  There’s also a statue of the Queen of Cannery Row, Kalisa Moore, who ran a beatnik cafe.

Two doors down from the historic cottages, is Wing Chong’s Market (837 Cannery Row), also fictionalized in Steinbeck’s book as the location where characters purchased supplies.

Next door is the historic La Ida Cafe (851 Cannery Row) also featured in Steinbeck’s book.  It had a notorious history, run as a brothel for many years, before being purchased by the Queen of Cannery Row, Kalisa Moore.  She transformed it into the bohemian Kalisa’s Cafe, from 1957 to 1985, creating an important link to Steinbeck’s era, long after the canneries were gone.  There’s a plaque on the front door commemorating Kalisa’s long tenure at this site.

The final stop along Cannery Row is the magnificent Monterey Bay Aquarium, the best aquarium in the United States. 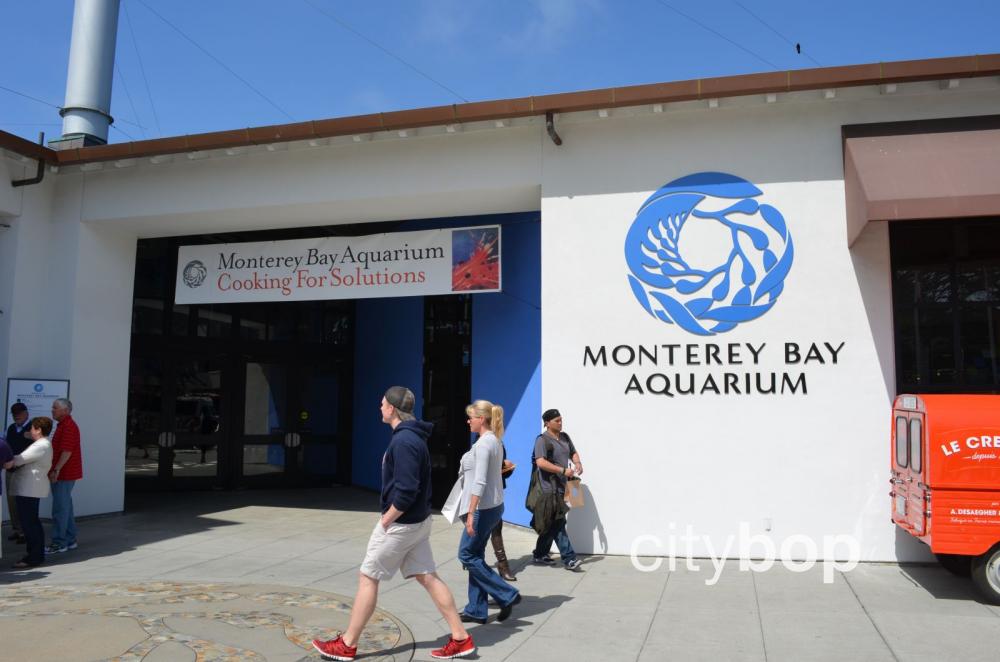 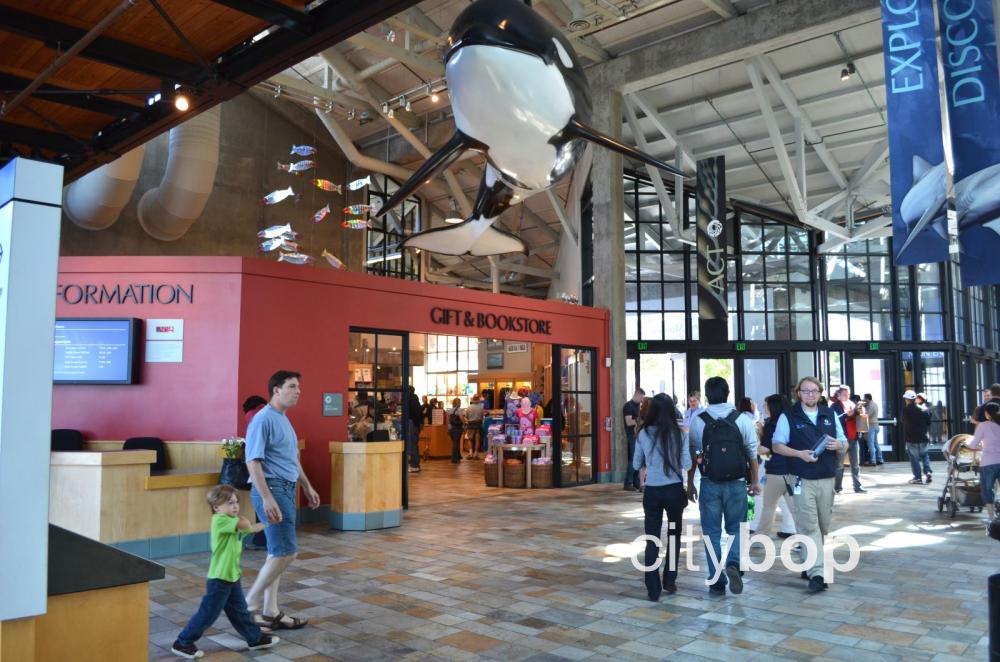 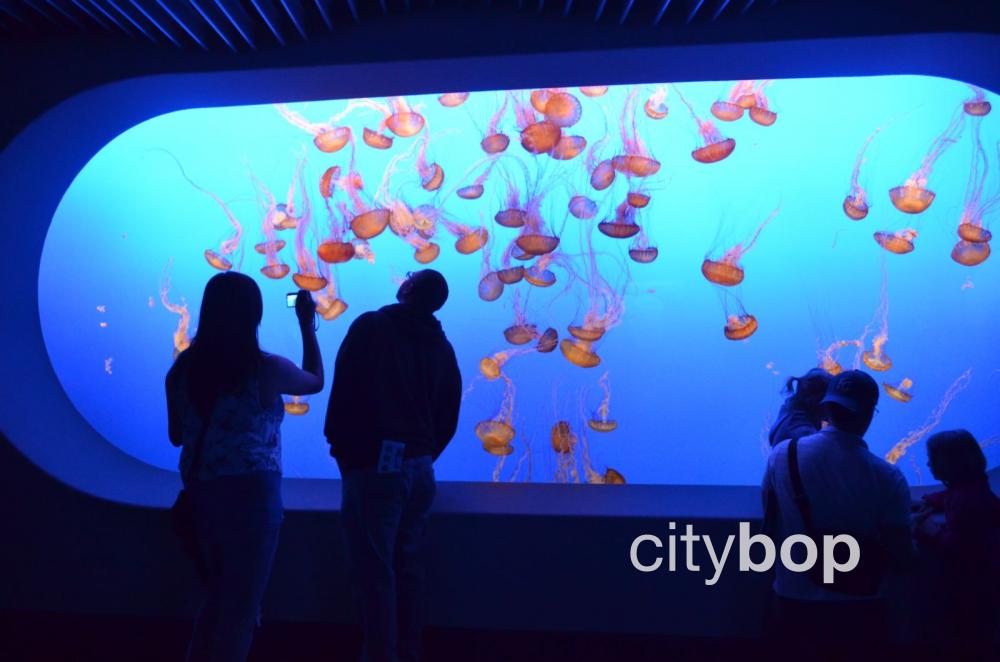 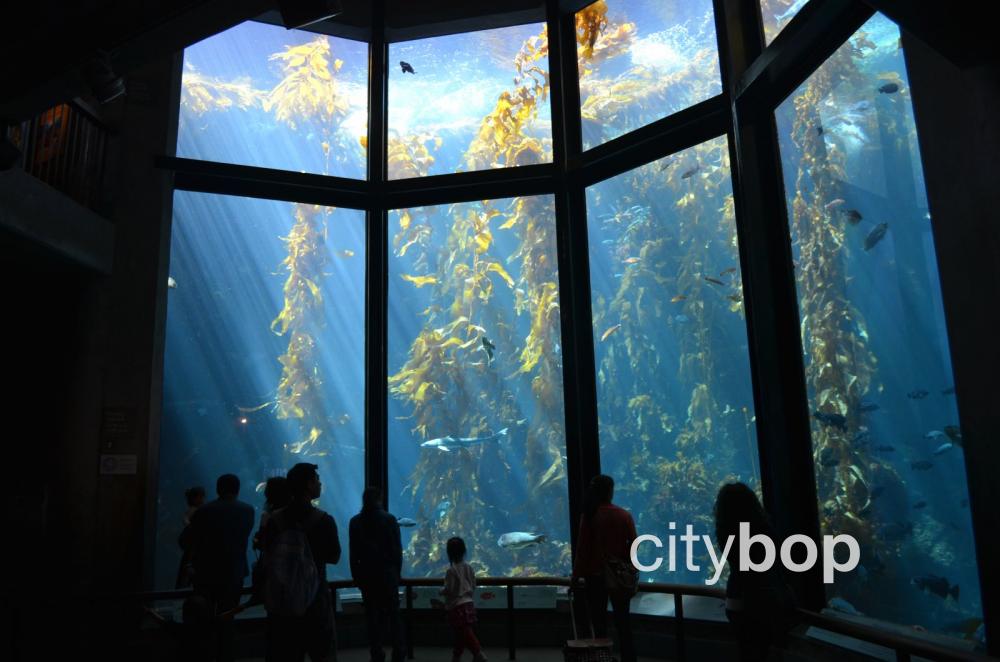 There are some more fascinating information boards outside the Monterey Bay Aquarium.

During the 1920s to the 1940s, Monterey was a boom town for salmon fishing, and the canneries thrived along famous Cannery Row, but by the 1960's all the canneries at Monterey had closed. Monterey Bay is now part of a National Marine Sanctuary. 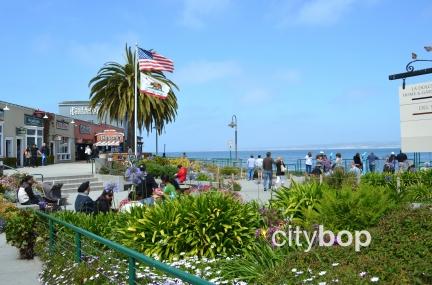 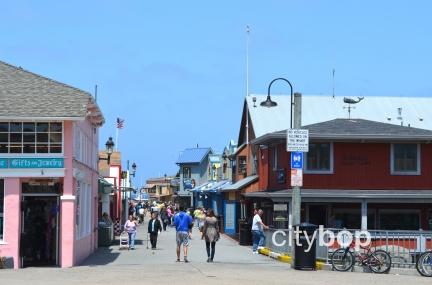 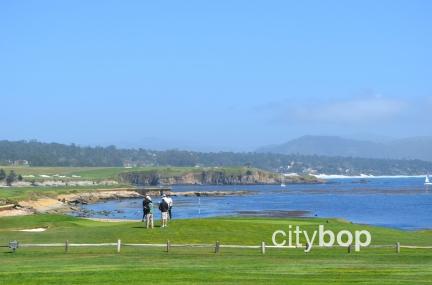 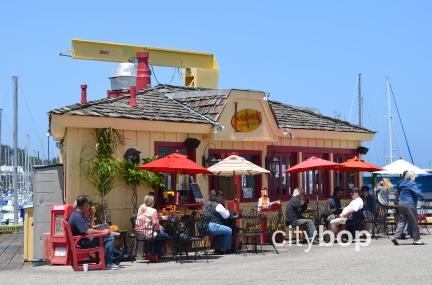