See WWII torpedoes and submarines at the Naval Undersea Museum.

The free Naval Undersea Museum is located at Keyport across Puget Sound from Seattle.

To get there from Seattle, drive 1.5 hours around Puget Sound, or take the 35-minute Bainbridge Island Ferry then drive 20-minutes to Keyport.

The Naval Undersea Museum provides a fascinating look at the history of undersea nautical and military ventures.  It's a superb museum and one of Washington State's hidden treasures.

Check hours for the Naval Undersea Museum, at 1 Garnett Way, Keyport, WA 98345.  The nearest restaurants are along the charming waterfront at the Scandinavian-themed town of Poulsbo.

1. Get up-close to real torpedoes from World War II.

A major highlight of the Naval Undersea Museum is seeing torpedoes and missiles at the Naval Weapons Exhibit.

Learn about the evolution of torpedoes, starting with the first self-propelled torpedo built in 1866 by Englishman Robert Whitehead. This was followed by  the faulty World War II torpedoes that ran circles around their targets instead of hitting them. Finally, there are the advanced torpedoes of today. 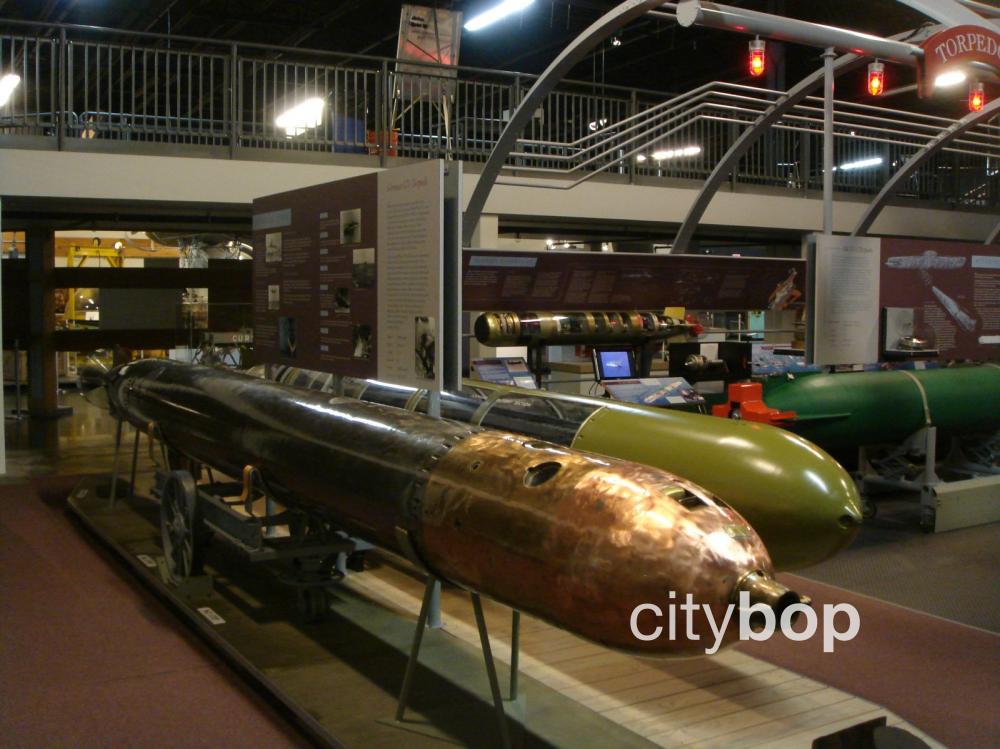 It's an awesome experience standing at the head of a German G7e torpedo, used on German U-Boats in WWII.  The green torpedo behind it, is the U.S. Navy's Mark 18, launched from submarines. It accounted for nearly a third of torpedoes launched by the U.S. Navy in WWII, but was plagued with design problems. 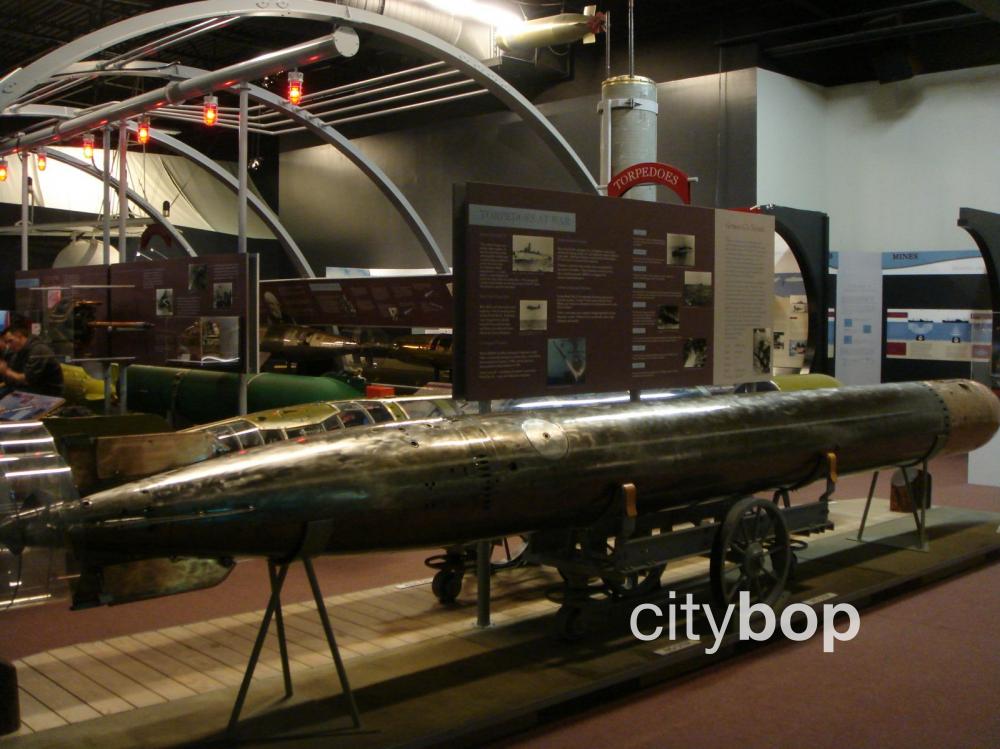 This is the fearsome German G7e torpedo, seen from another perspective.

2. Step inside a real control room from a U.S. Navy submarine. 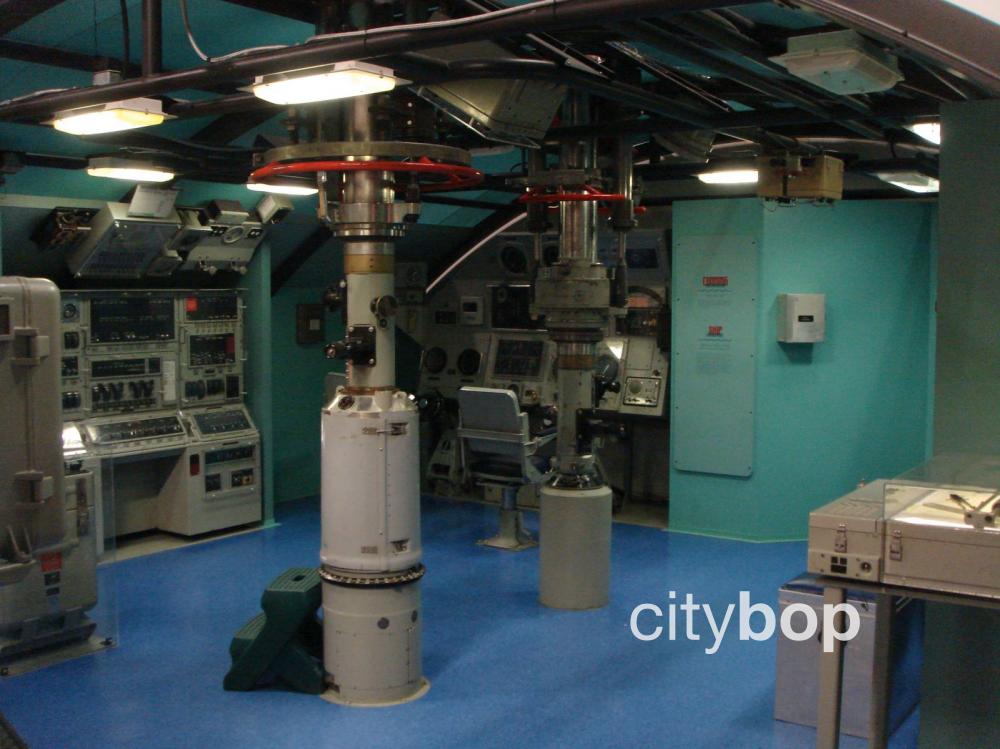 Step inside the control room of a retired submarine; the USS Greenling (SSN 614).  This submarine served in the U.S. Navy from 1967 to 1993, and was a fast attack, nuclear powered submarine. It held 12 officers and 95 enlisted soldiers in this tight space. 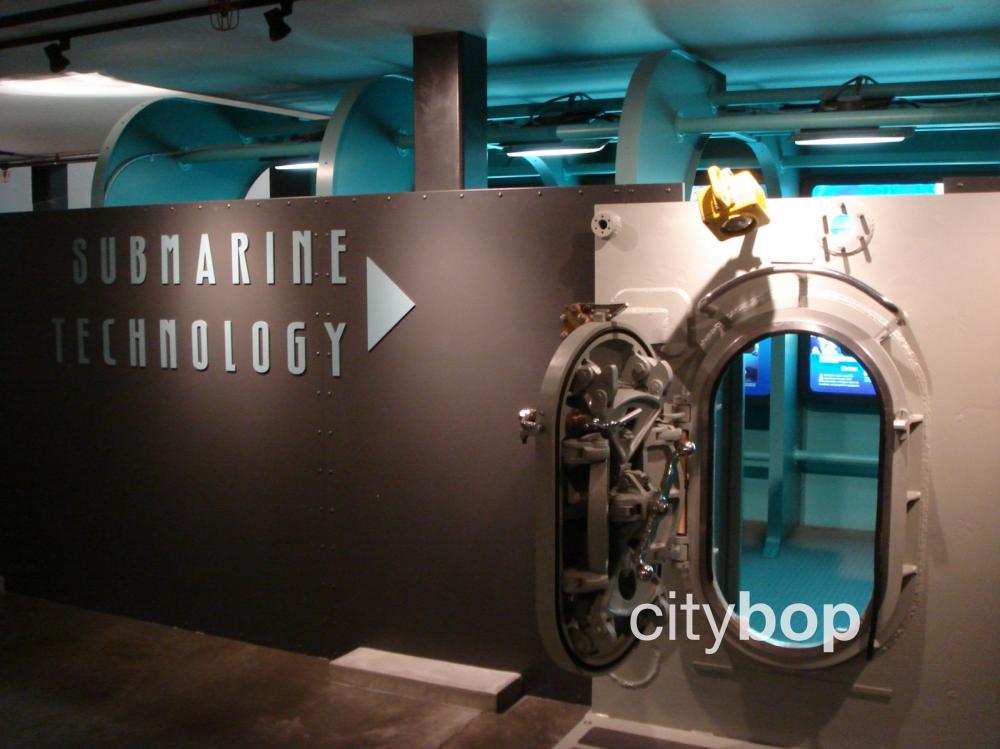 Submarines were of immense strategic importance during WWII for protecting shipping lanes, rescuing aviators, and launching offensive operations in the European and Pacific Theater. They were also pivotal to the U.S. victory over Japan in WWII, by cutting off Japan's supply line to fuel and food. The U.S. sunk over 1,100 Japanese merchant ships and 200 naval vessels.

The U.S. Navy also suffered major loses in WWII, and 52 out of 275 U.S. submarines were sunk during WWII, leading to 3,506 casualties. 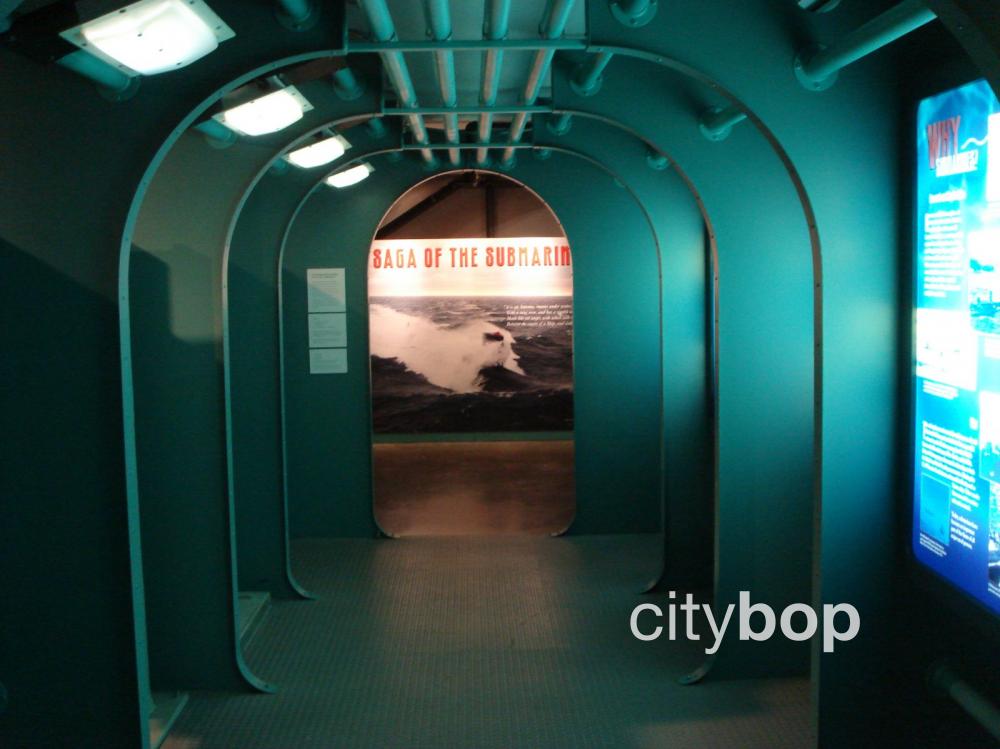 Today's nuclear powered submarines are constantly on patrol, and are capable of staying underwater for months at a time.

3.  See the deep submergence vehicle from the blockbuster movie "The Hunt for Red October" (1990). 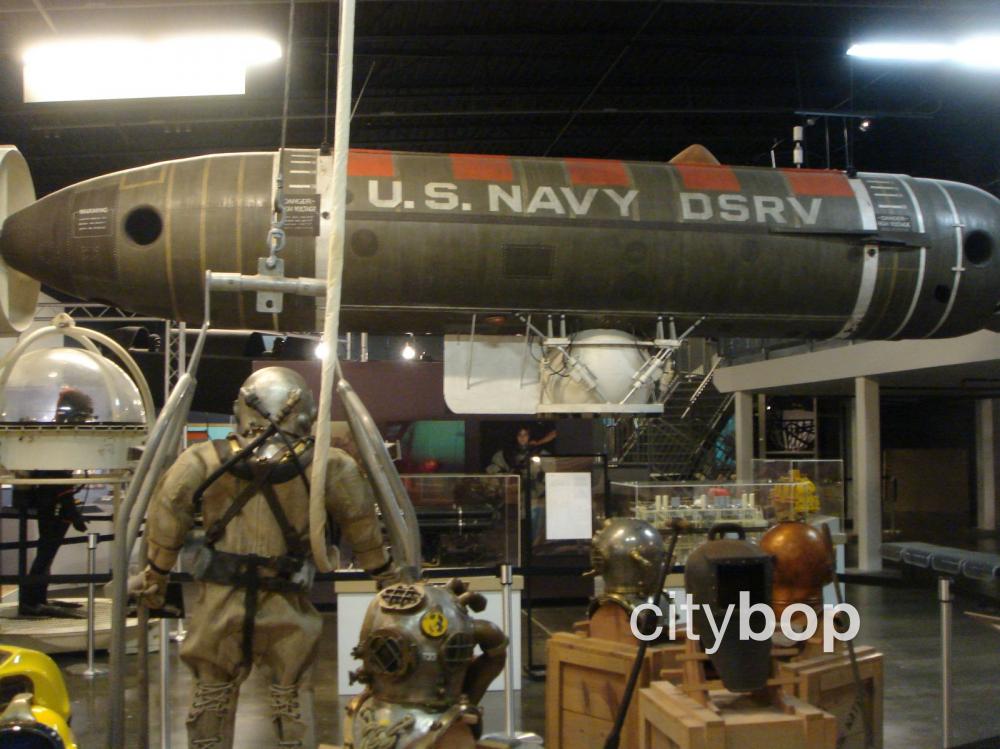 Another interesting display at the Naval Undersea Museum is the model of a Deep Submergence Rescue Vehicle, used in the Sean Connery and Alec Baldwin Film "The Hunt for Red October".  The main purpose of this type of vehicle, is to rescue crew members trapped in a damaged submarine.

4. Peer inside the chamber that rescued all 33 crew from a U.S. submarine. 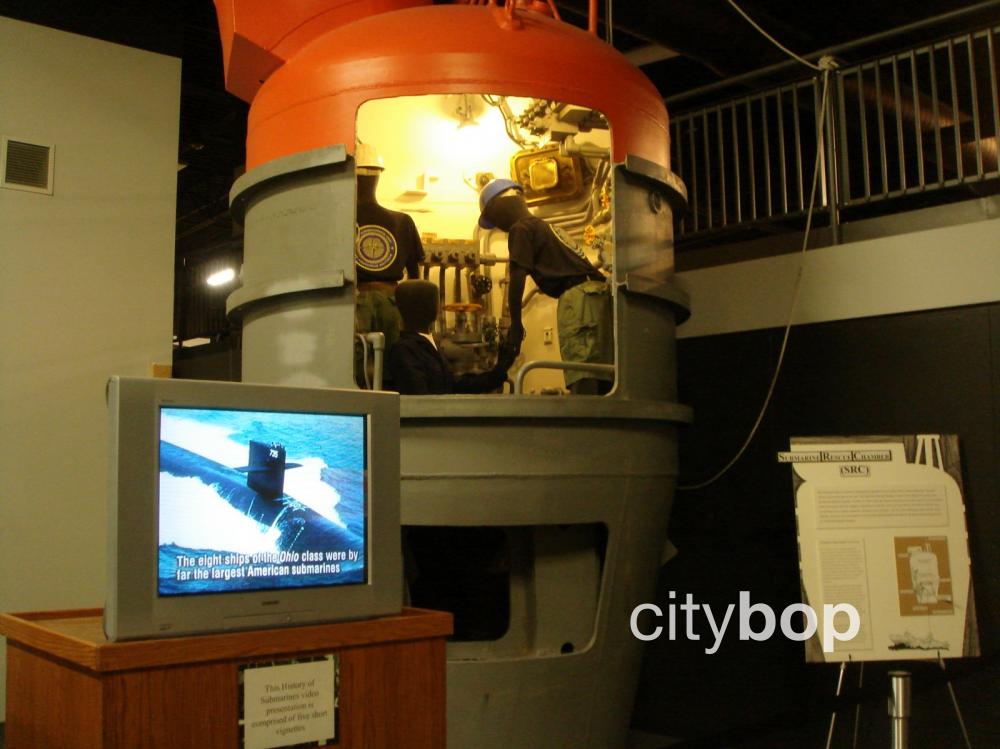 In 1949, this chamber was used by navy divers to save all 33 crew-members onboard the USS Squalus submarine. Crewmembers were trapped at 240-feet when the submarine suffered a valve failure, but all made it out in the daring 13 hour rescue mission.

There's some great information on the exploits of U.S. Navy deepwater divers at the Naval Undersea Museum, including the first awkward looking submersible suits used for diving. 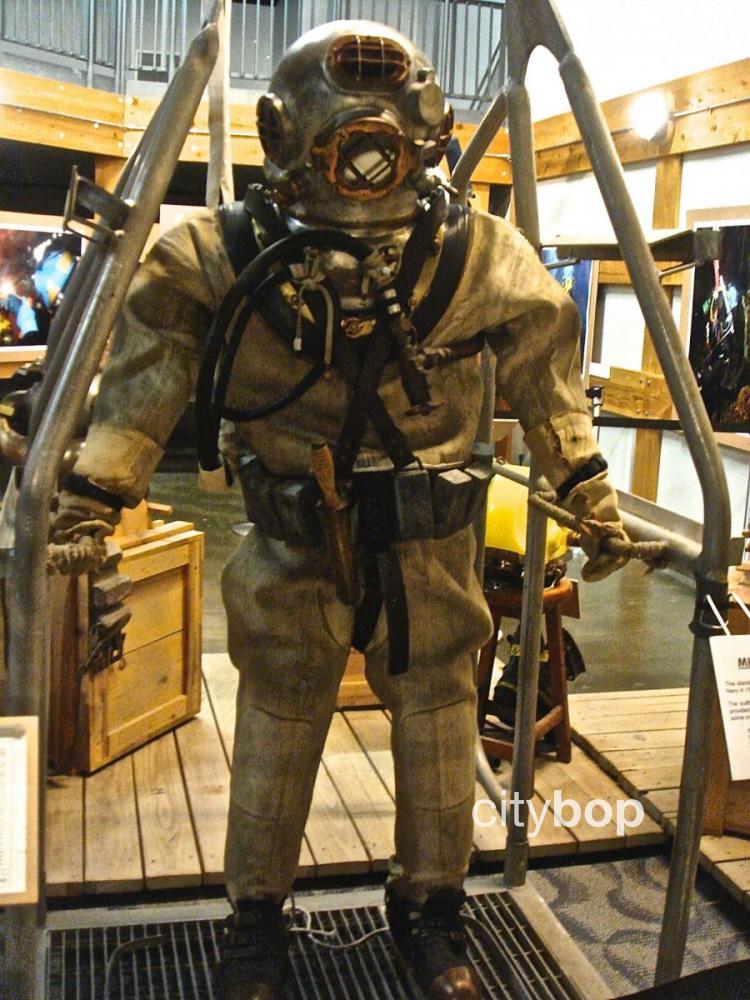 This is a MK V Diving System developed by the US Navy in 1918, weighing a hefty 185 pounds. It was a revolutionary step forward for divers, enabling an airtight copper helmet to be sealed to a canvas suit, with air pumped through a tube from a compressor on a boat. 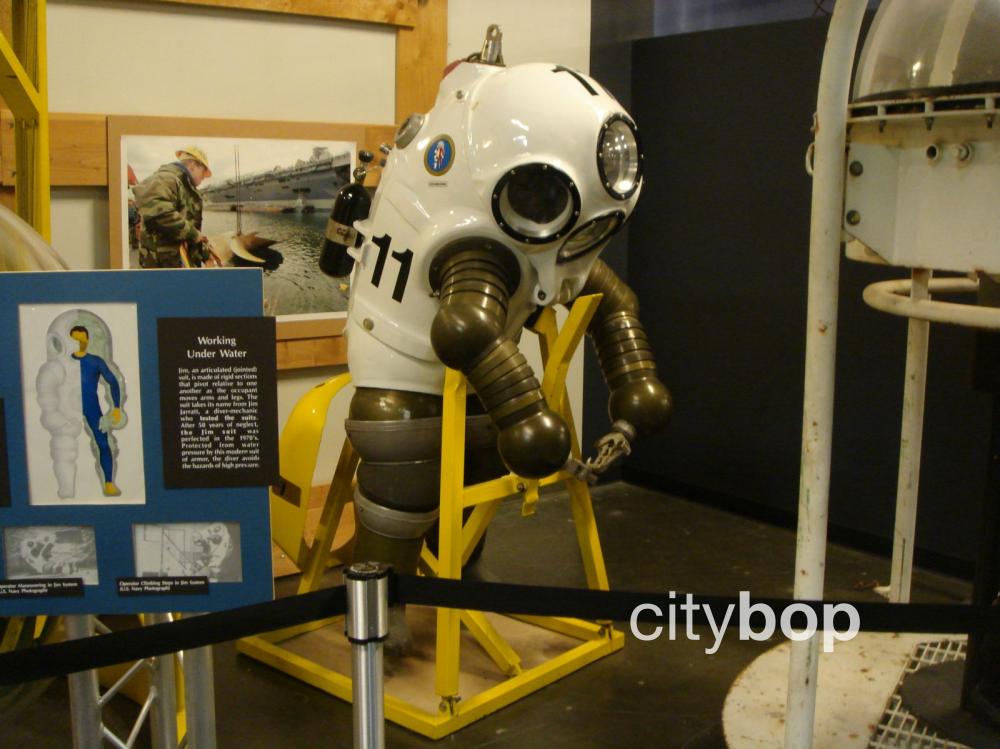 The huge Jim Suit at the Naval Undersea Museum was launched in 1971, and was very popular in the oil industry. It has a robotic appearance, clad in armor to protect from water pressure changes, while still allowing mobility with articulated arms and legs. 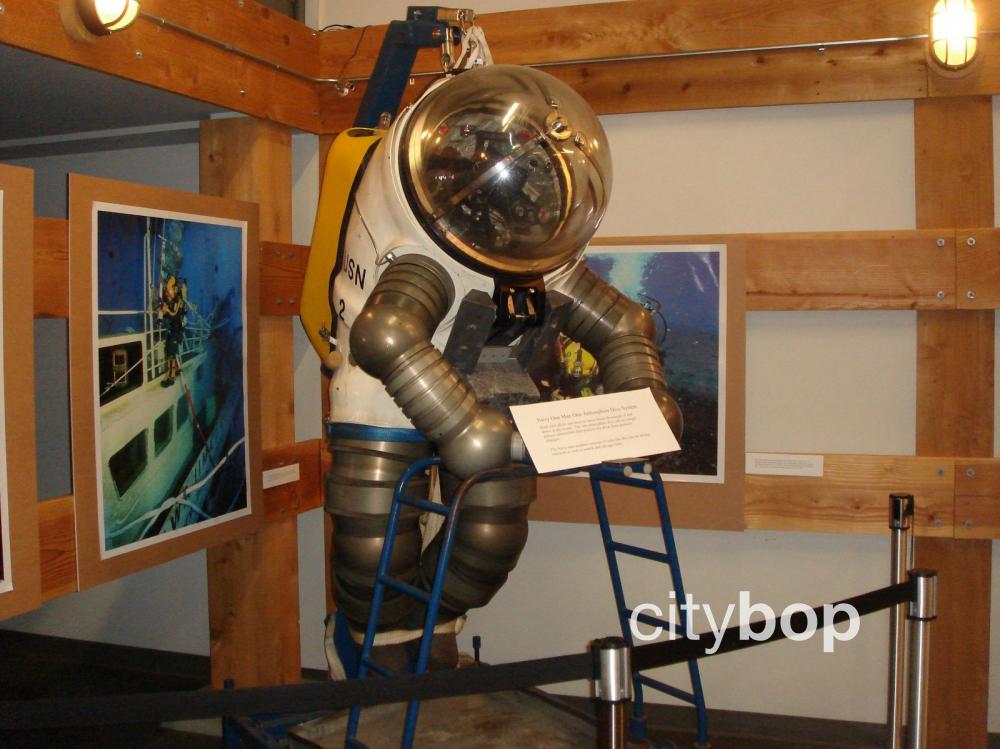 The Navy One Man One Atmosphere Diving System (NOMOADS) was an improvement over the JIM suit.  It had an unobstructed field of vision compared to the JIM, which had four domes on the helmet.  It also allowed a greater range of motion.

Things to do near the Naval Undersea Museum

If you're a military history buff, then travel 10-miles south to the excellent Puget Sound Navy Museum at Bremerton.  There's also a Vietnam-era warship  on the Bremerton waterfront, the USS Turner Joy.

Visit the charming township of Winslow at nearby Bainbridge Island for trendy shops and a meal, then explore the gorgeous gardens and chateau at Bloedel Reserve.  Drive to the Scandinavian town of Poulsbo to enjoy it's bustling waterfront and savor a sweet treat at its popular bakery.  The SEA Discovery Center at Poulsbo is fun for kids, with touchtanks full of starfish.  It's also free!

Visit the quaint town of Port Gamble just 16 miles north of the Naval Undersea Museum, with a cute cafe and interesting museum, then continue up to the breathtaking Point No Point Lighthouse.