Point Defiance Park is one of the largest urban parks in America, with a world-class zoo, beaches, trails, and gardens.

Point Defiance Park is a 1-hour drive south of Seattle near Tacoma, on a spectacular peninsula in Puget Sound.

The park has a 5-mile loop road that passes major attractions like the original gardens, zoo, and lodge from the 1890s, when excited visitors used to arrive by streetcar from Tacoma. Back then it was seen as a big adventure to travel to the wilds of Point Defiance!

Unfortunately some of the historic park buildings were demolished, like the huge Greenhouse (1901), Nereides Saltwater Baths (1906), Restaurant Pavilion (1921), and Funland Amusement Park (1933).

The majority of Point Defiance Park is covered in lush forests of douglas fir, cedar and maple, with hiking trails overlooking the snow-capped Olympics and Mount Rainier from dramatic viewpoints and beaches.

10 best things to do at Point Defiance Park 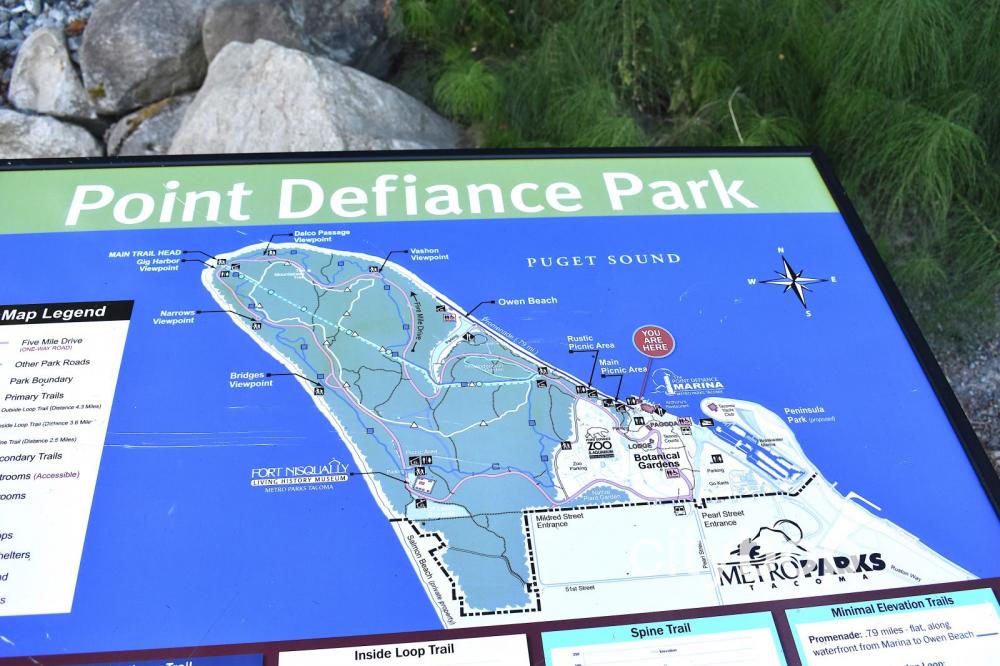 1. Stroll through the beautiful Rose Garden.

Drive through the Pearl Street Entrance at Point Defiance Park, then park your car and wander past the pond to the exquisite Rose Garden.  The one-acre Rose Garden is free to visit, and was established in 1895. This Rose Garden at Point Defiance Park is popular for wedding photography sessions, when this gazebo is in big demand.  The gazebo is at the center point of the Rose Garden, with sweeping views of the entire garden. 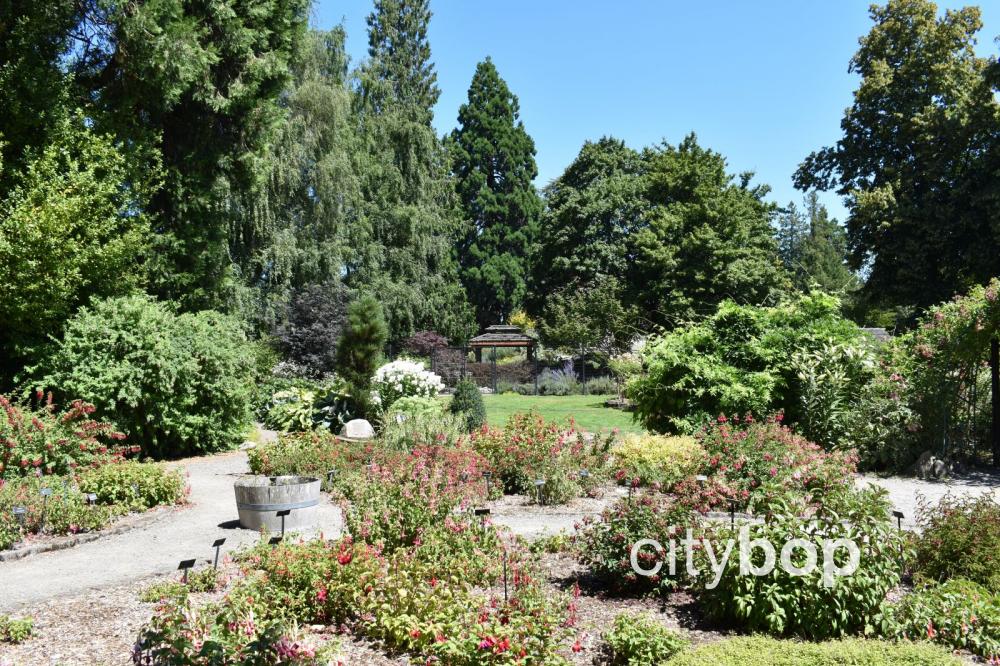 There's also a wishing well tucked away beneath another gazebo. 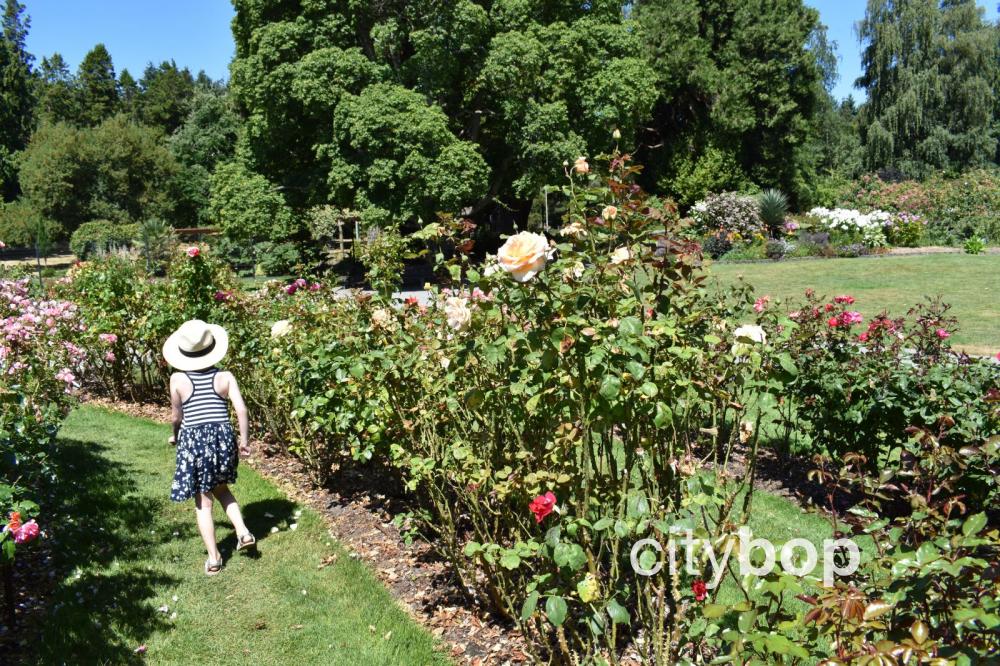 See miniature roses and over a hundred other rose varieties in bloom, all labeled so you know what you're looking at. 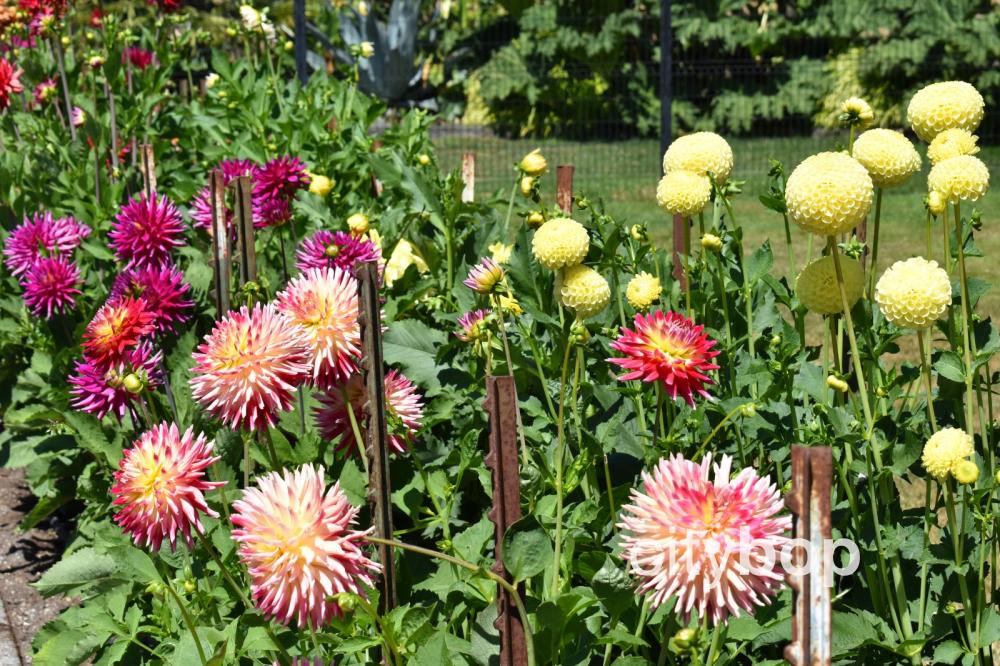 The Rose Garden at Point Defiance Park also has a gorgeous selection of dahlias.  It's lovely to stroll around, and take in the fragrant scent of these flowers. The Japanese Garden at Point Defiance Park is anchored by the historic Pagoda, constructed in 1914.

The Pagoda originally functioned as a streetcar station for daytrippers from Tacoma. It was super fancy, with lots of little luxuries like a heated waiting room, marble restrooms with attendants, and a separate smoking room for men.

The pagoda later became a bus station in 1938, but ridership declined when cars became popular, and bus services finally ceased in 1962.  The Pagoda was at risk of demolition, but was renovated by Metro Parks Tacoma, and is now used as a beautiful event center. 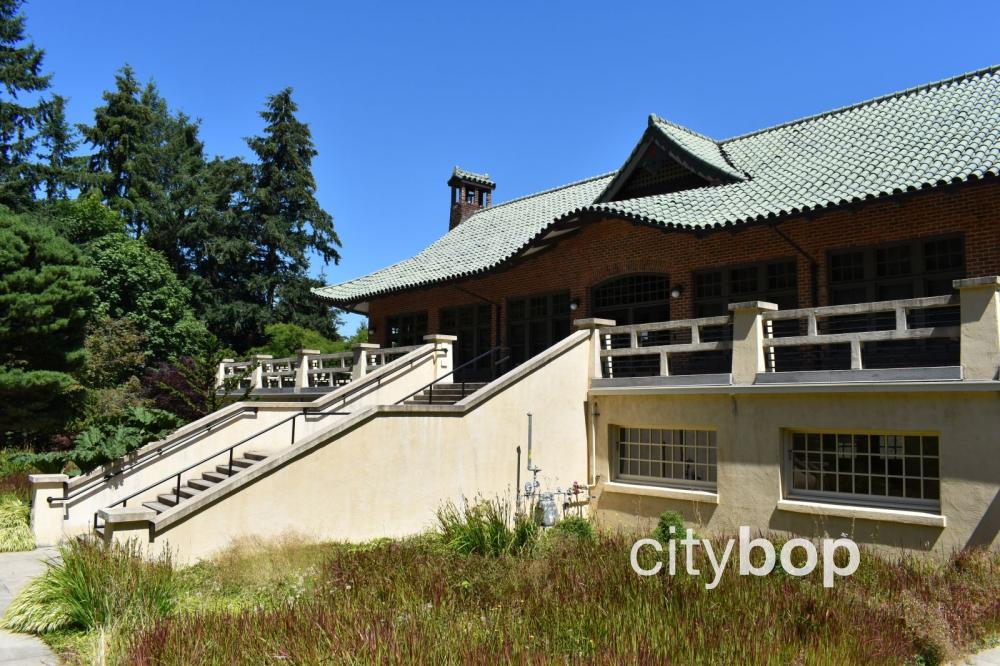 The Pagoda replaced on a old rustic hut from the early 1900s, so was quite an upgrade for the citizens of Tacoma! 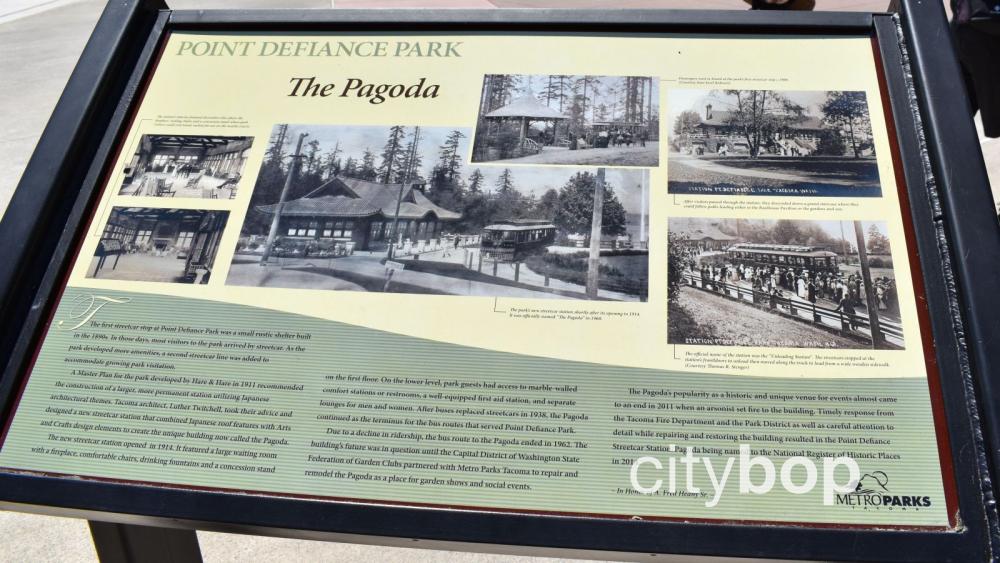 Take a look at some of these vintage photos of The Pagoda, when visitors used to arrive at Point Defiance Park by streetcar. 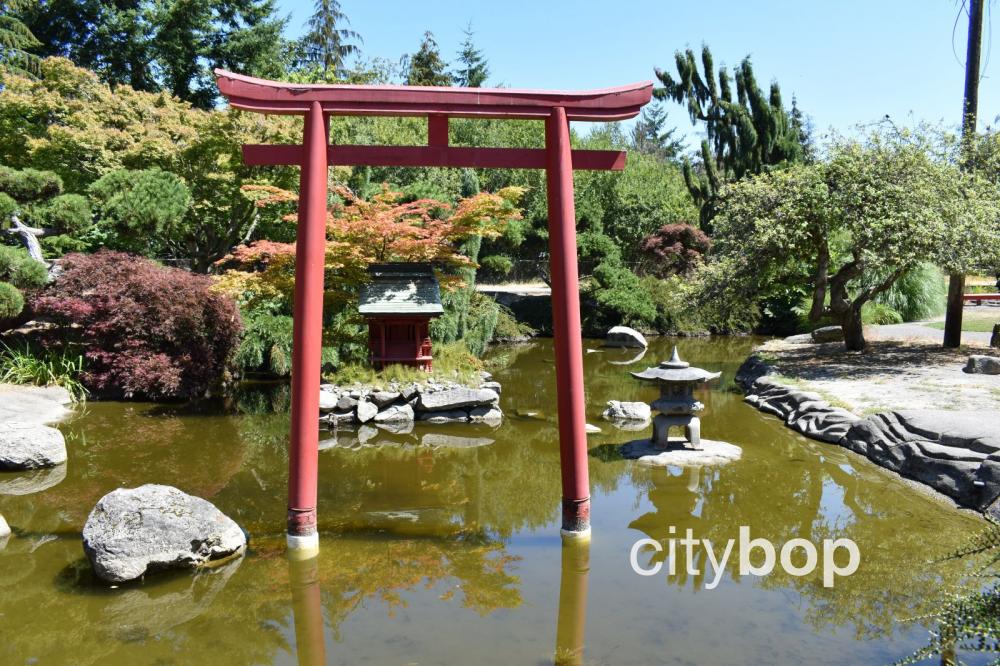 This is a traditional Torii Gate and shrine in the lake, with a concrete lantern in the foreground.  It was donated by Tacoma's sister city of Kitakyushu in 1961. 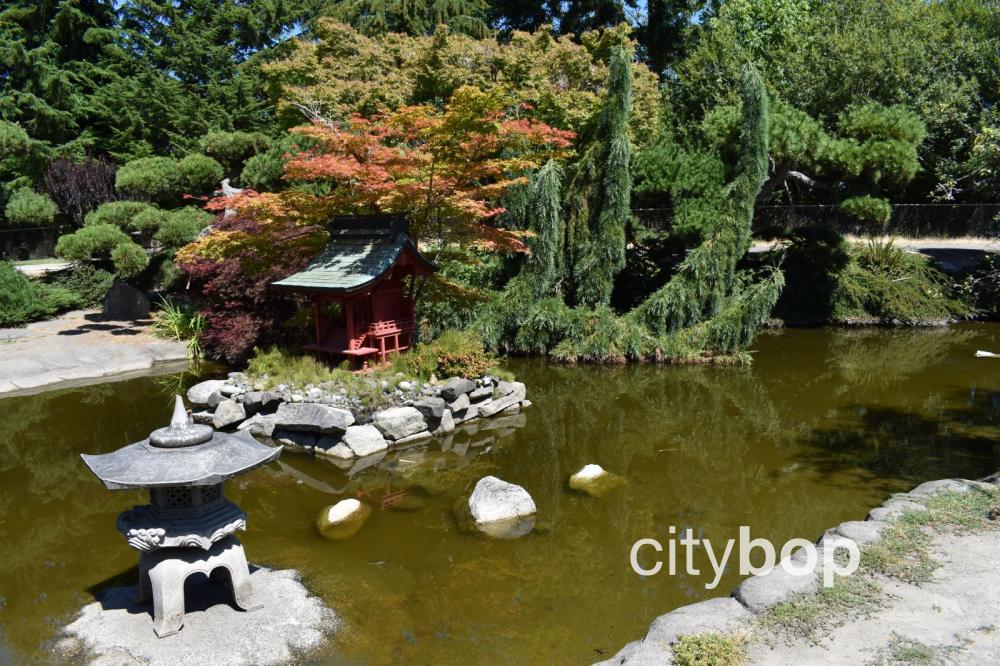 The red shrine has an enchanting setting on a tiny island. 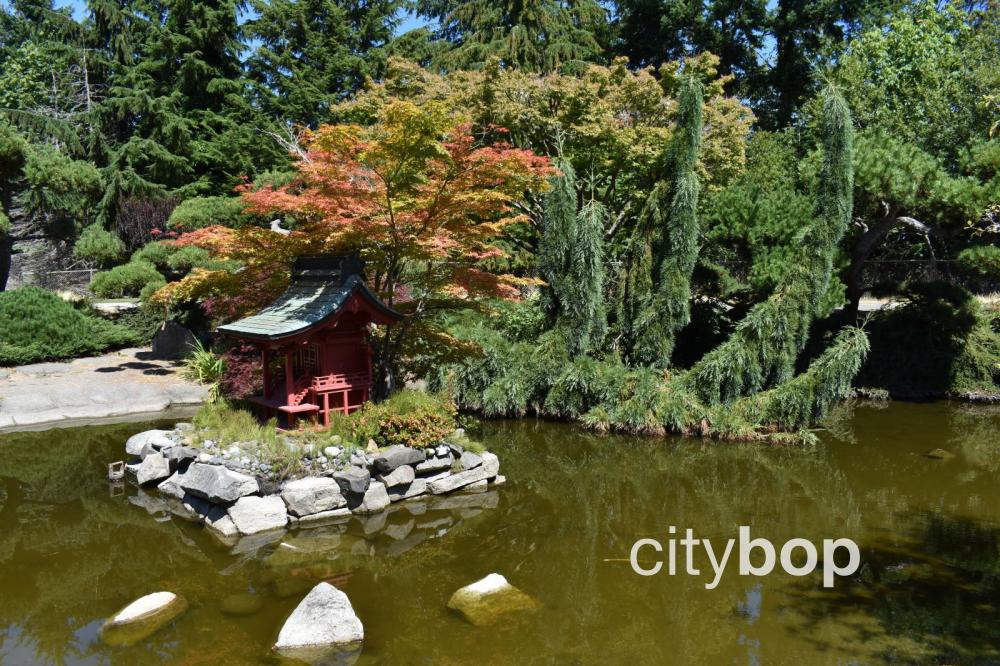 There's an explosion of color here, with blazing red maples off-set by the more subdued green of the conifers. 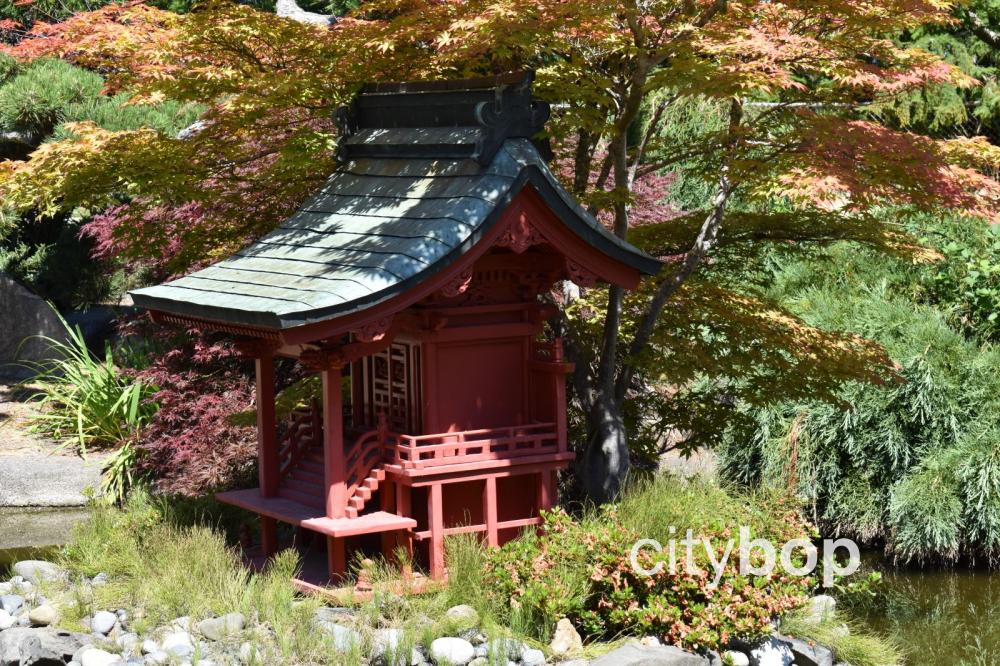 3.  Get information at the visitor center at the historic Lodge.

The oldest standing building at Point Defiance Park is the original 1898 lodge. 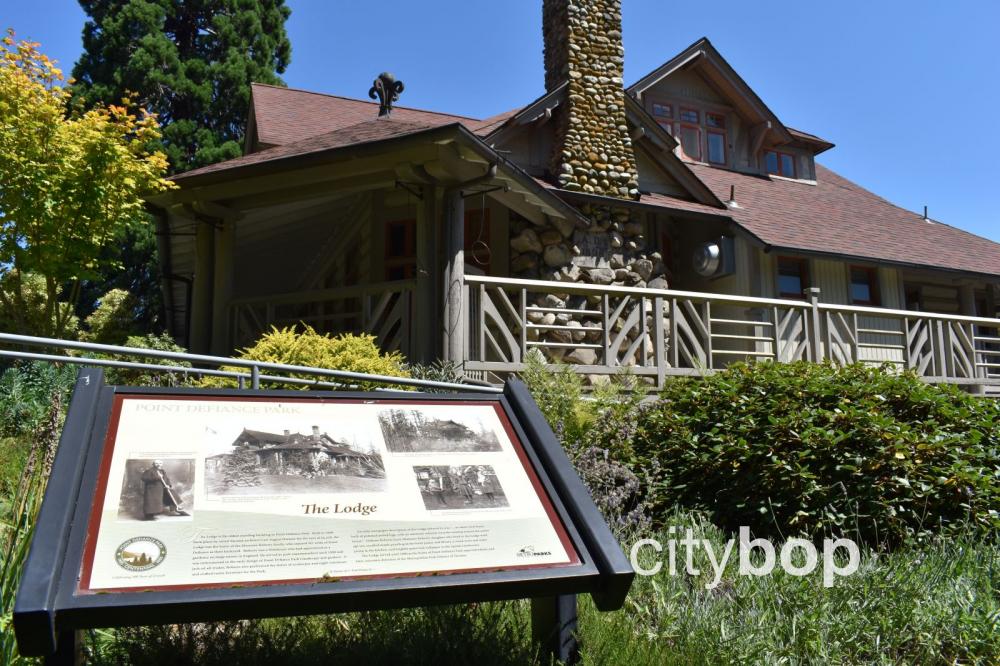 This stone lodge was constructed for the Park Superintendent, but now functions as the Point Defiance Visitor Center.  The Visitor Center is a great place to pick up maps and gifts, get directions, obtain a Junior Ranger Handbook, and borrow tennis equipment.

Point Defiance was originally a 640-acre military reservation in 1866, before ownership transitioned to the City of Tacoma in 1905.  At the time of the Lodge's construction it was still considered a wild and remote place.  The first Park Superintendent moved into the Lodge with his wife and four kids, tending to the gardens, feeding the zoo animals, and keeping an eye on everything. Here's a photo of the first Park Superintendent and some of his kids. 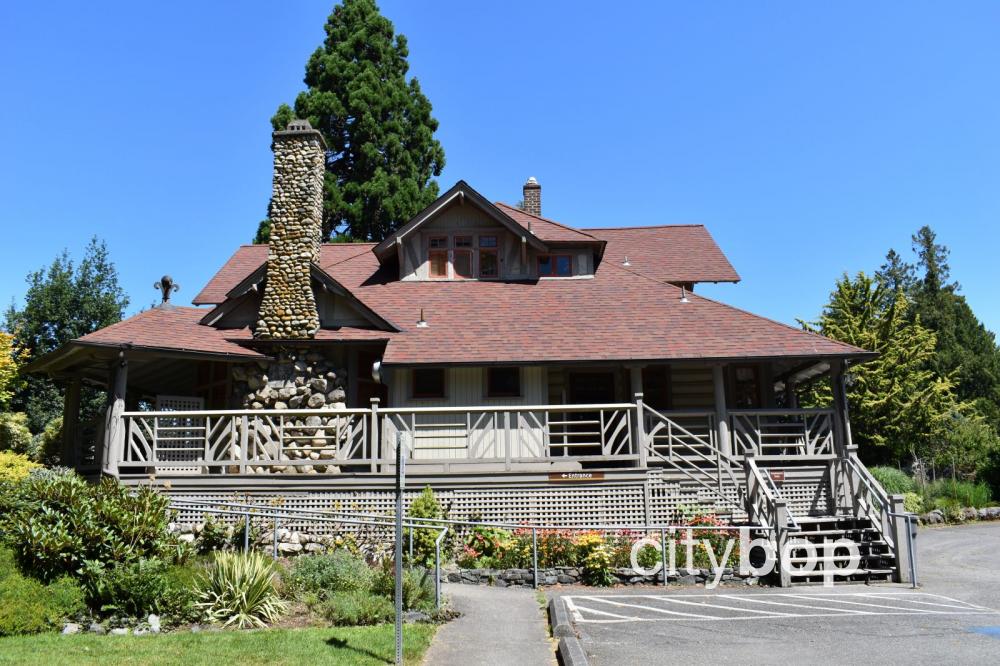 4.  See ducks and geese at the Point Defiance Park pond.

The duck pond is at the entrance to Point Defiance, with picnic tables, a footbridge and waterfall.  It's a big hit with kids, but there are signs cautioning visitors not to feed the ducks. 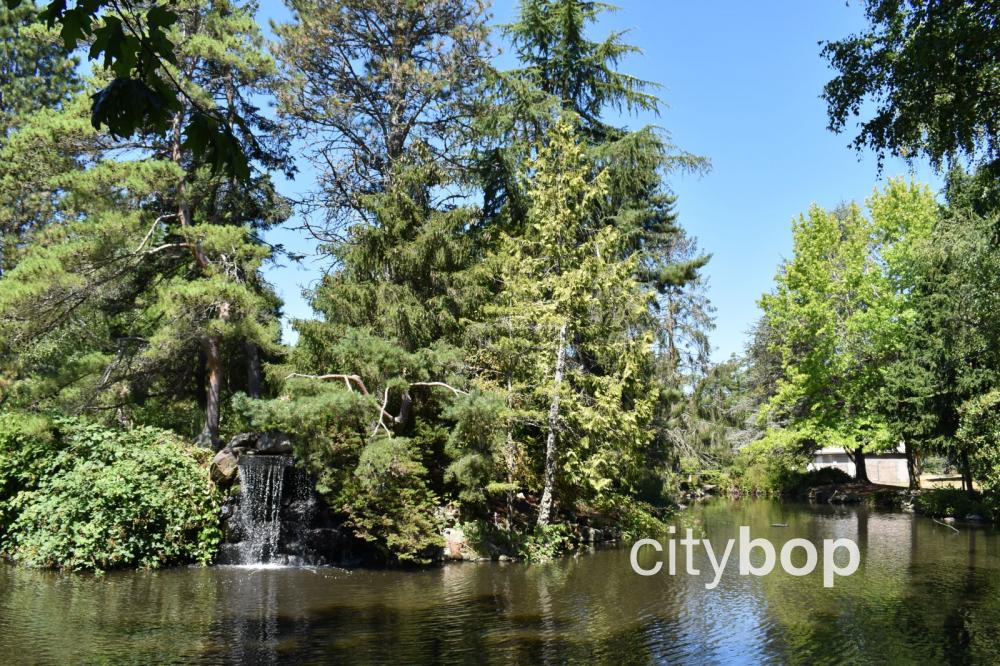 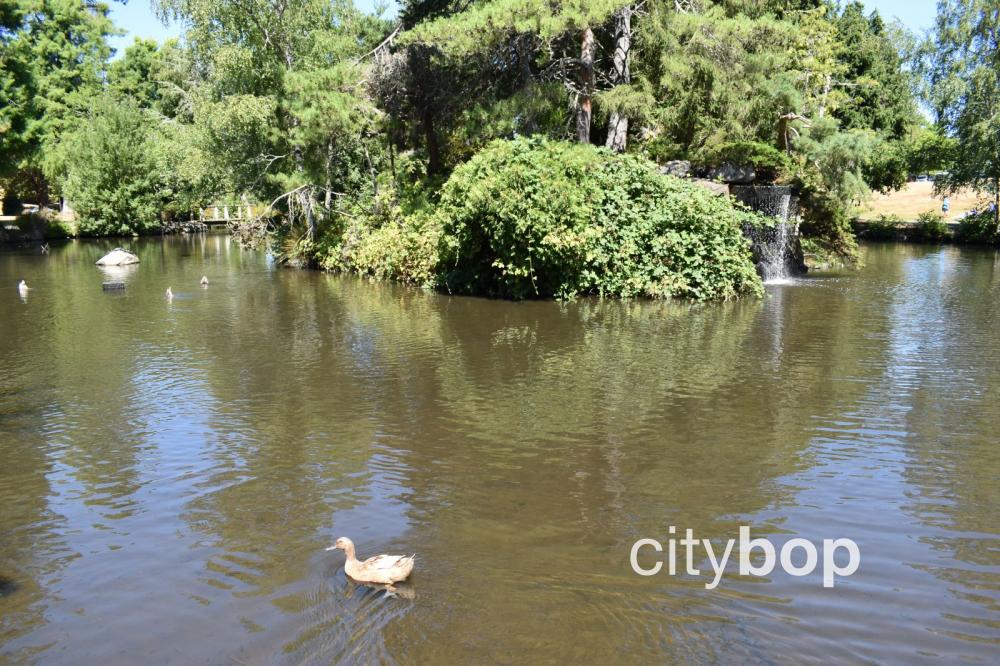 5.  Spend an afternoon at the Point Defiance Zoo.

The Point Defiance Zoo and Aquarium has amongst the most breathtaking settings of any zoo in the U.S., with an incredible vantage point overlooking Puget Sound and Mount Rainier.

The Point Defiance Zoo is spacious and well planned and has a fascinating array of animals like Polar Bears, Clouded Leopards, Malayan Tapirs and Sumatran Tigers.  The shark tank is very impressive and a little scary.  Some fun activities for kids include the Carousel and Camel rides.  The Zoo also seems to run regular shows throughout the day.

The Point Defiance Zoo started out in 1899 with a bear pit, and has evolved into the world-class facility it is today. 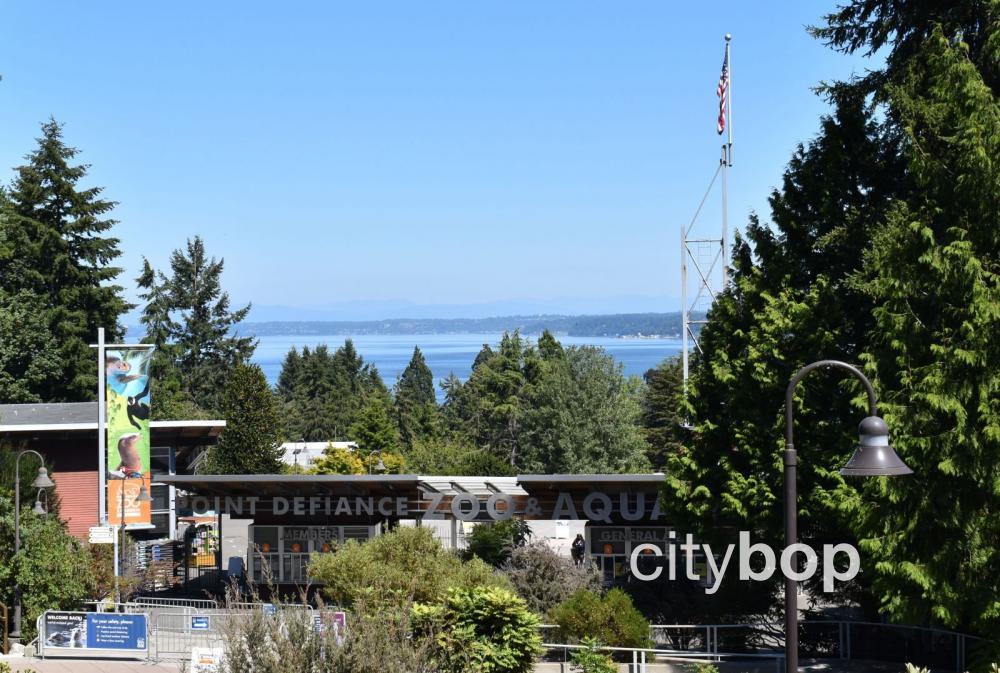 Continue on towards Owen Beach at Point Defiance Park.  This is a great sunbathing beach in summer, with spectacular views of Mount Rainier and Vashon Island. There are plenty of picnic tables and a nice lawned area behind the beach.  The Bath Kiosk also sells refreshments.

The secluded north end of this beach is a true gem, where lush forest meets the water in a thin stretch of sand strewn with weathered logs.  It's a truly enchanting and romantic place, but be extremely cautious of the changing tides. 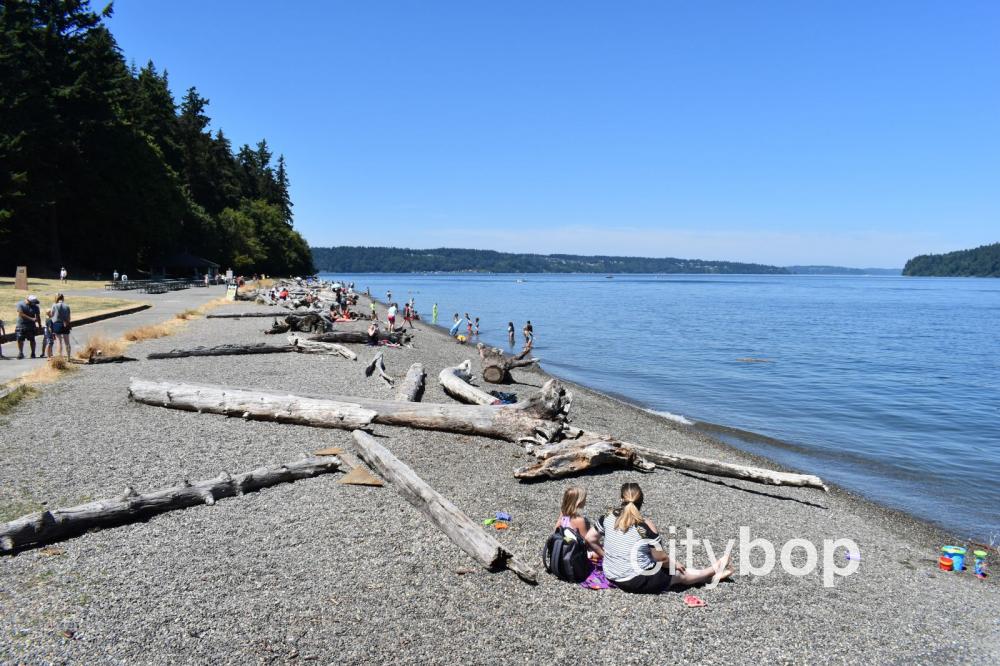 Owen Beach has plenty of amenities, like restrooms and picnic tables.  The beach is pebbly, so bring some sturdy shoes.  There are no lifeguards, so swim at your own risk.

The Five mile Drive at Point Defiance Park has both an outer loop for primarily pedestrians at its north end, and inner loop for cars at its south end (see these loops on a map). 8.  Walk down to Point Ruston's open air mall, along the Wilson Way Bridge.

For the first time in a hundred years, Point Defiance Park is connected to Point Ruston by a footbridge. After crossing the footbridge, take the stairs down to the open air mall at Point Ruston, or ride down the fun "snakes and ladders" slide to the bottom. 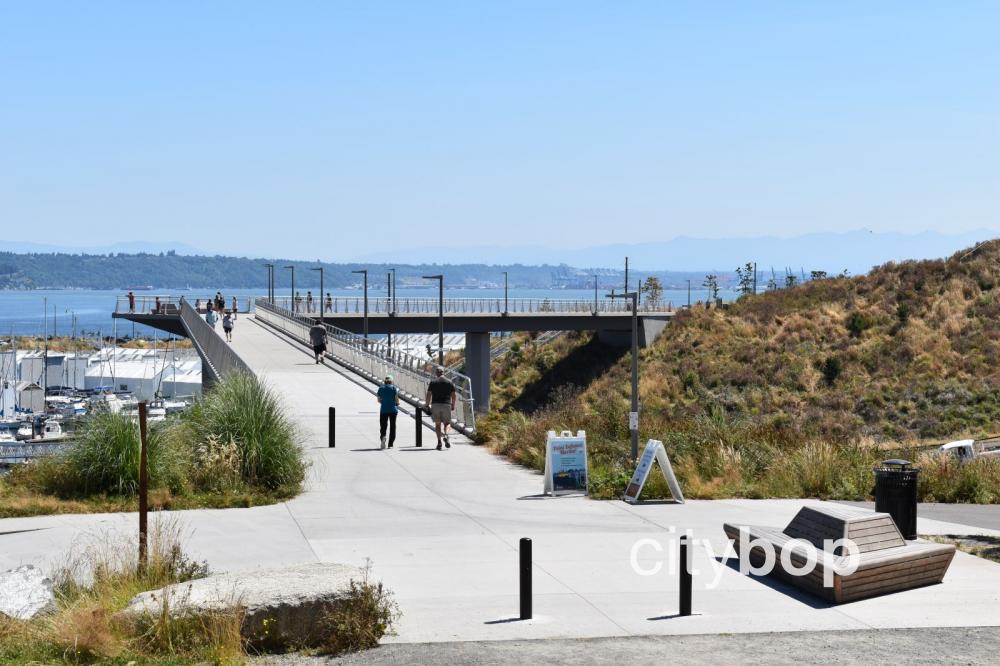 Point Ruston was the site of a former copper smelter, but has now been cleaned up and re-developed, with walking paths, and an open-air mall featuring shops, restaurants, a playground, and splashpad.  It has a spectacular location, with incredible views of Mt Rainier. The Fort Nisqually Museum at Point Defiance Park stages historic re-enactments, and is well worth a visit, especially with kids.

The Fort was established by the British Hudson's Bay Company in 1833, seventeen miles away in DuPont.  Two of the original buildings were relocated to Point Defiance Park in the 1930s, and are the only surviving structures from the historic Hudson's Bay Company.

Step back in time, and experience life in a remote fur trading outpost, where the British traded blankets and guns with Native Indians, in exchange for valuable fur pelts.

Pre-purchased tickets are required for admission.

Best (and only) restaurant at Point Defiance Park

Drive down to the new Point Ruston Waterfront development outside the south-west border of Point Defiance Park, with plenty of trendy waterfront restaurants.  Choose from the Jewel Box Cafe, Wildfin American Grill, the Daily Catch, and Stack 571 Burger and Whiskey Bar.

If you wish to head into downtown Tacoma, try the new McMenamins Pub at the Elks Temple Hotel, next to the striking Spanish Stairs.

Other things to do in Tacoma

Nearby Tacoma has an abundance of great museums.  Try the Tacoma Glass Museum,  Washington State History Museum,  LeMay Car Museum or  Tacoma Art Museum.  If you have kids, the FREE Tacoma Children's Museum will keep them entertained for hours!

Further afield, both Gig Harbor and Olympia are some interesting towns to visit near Tacoma.  Olympia has a lot of activities for kids, like a wonderful Children's Museum, a science museum, and a man-made wading stream in a city park.