Visit the world-class Maryhill Museum on the Washington side of the Columbia River.

The Maryhill Museum is 2-hours east of Portland, on the Washington side of the Columbia River.

It has a spectacular cliff-top location in a beaux arts mansion on the Columbia River, with English style gardens and breathtaking views. Stay overnight at the popular tourist town of Hood River, just 40-minutes drive west of the Maryhill Museum.

The Maryhill Museum was originally intended as a home for entrepreneur Samuel Hill, who attempted to establish a Quaker farmland community in the local area. However, lack of irrigation and isolation thwarted his efforts, so he decided to re-purpose the home as an art museum. It was dedicated in 1926, but didn't actually open until 1940, after Samuel Hill's death.

This museum has some of the world's most amazing art treasures, like sculptures and sketches from Rodin. Many of the pieces were donated by three of Samuel Hill's friends; famous dancer Loie Fuller, the Queen of Romania, and wealthy San Francisco philanthropist Alma Spreckels. 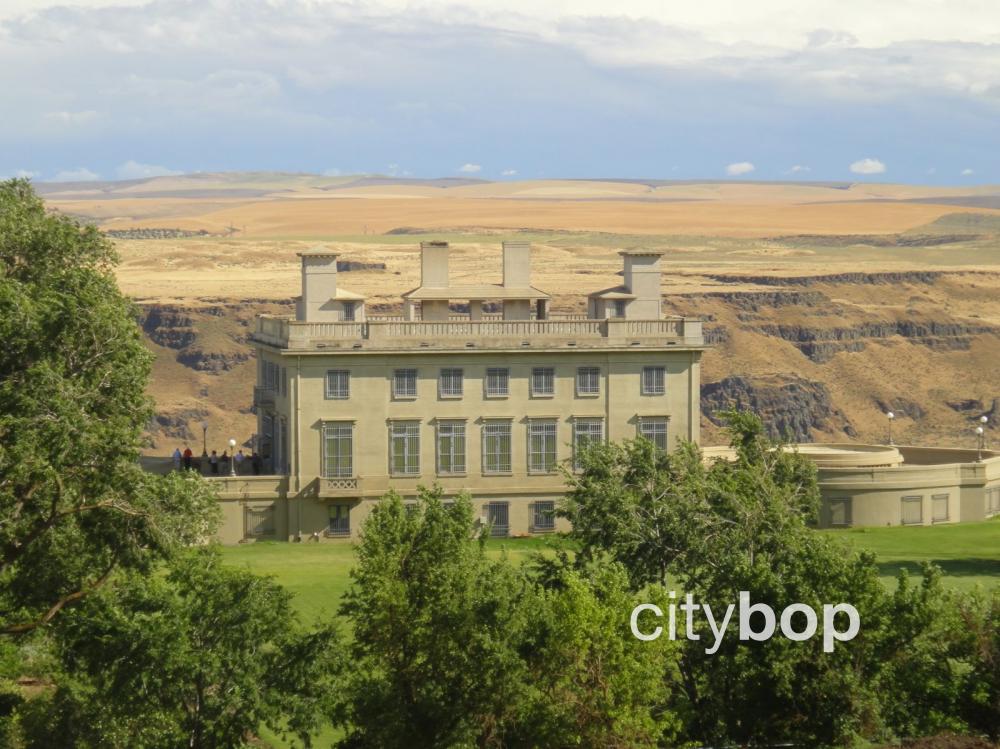 An unexpected delight at the Maryhill Museum is the Theatre de la Mode, a post WWII Parisian fashion collection.

The Theater de La Mode was an effort by Paris fashion designers to assert themselves on the world stage, after the devastation of WWII.  There was a severe shortage in dress materials in Europe and the America, thus they devised an ingenious solution to create a haute couture collection on miniature models. Dozens of Parisian fashion houses pooled together scraps of material to make this collection happen.

The Theater de La Mode opened in March 28, 1945 at the Louvre in Paris to adoring crowds, then toured other parts of Europe and the U.S. These mannequins are now on display at the Maryhill Museum in a series of theatrical stage scenes. The Theater de La Mode was donated to the museum by Samuel Hill's close friend, Alma Spreckels, a wealthy San Francisco philanthropist. Alma was a larger than life personality, who rose from poverty to marry wealthy sugar magnate, Adolph Spreckels, in 1908.  He built her the biggest mansion in San Francisco, and they jointly founded the Legion of Honor art museum in San Francisco.

In 1945, artist Jean Cocteau was asked to contribute a set for Theater de la Mode.  He titled the piece Tribute to Rene Clair: I married a Witch, in tribute to French filmmaker Rene Clair.  Jean Cocteau had a fascinating background, working on sets for Diaghilev's Ballet Russes, and was a celebrated artist, filmmaker, playwright and novelist, with a prolific body of work. This set at Maryhill Museum depicts a post-WWII apocalyptic Paris on fire, where a witch bride flies through the air on a stick, while another bride has fainted on a bed. 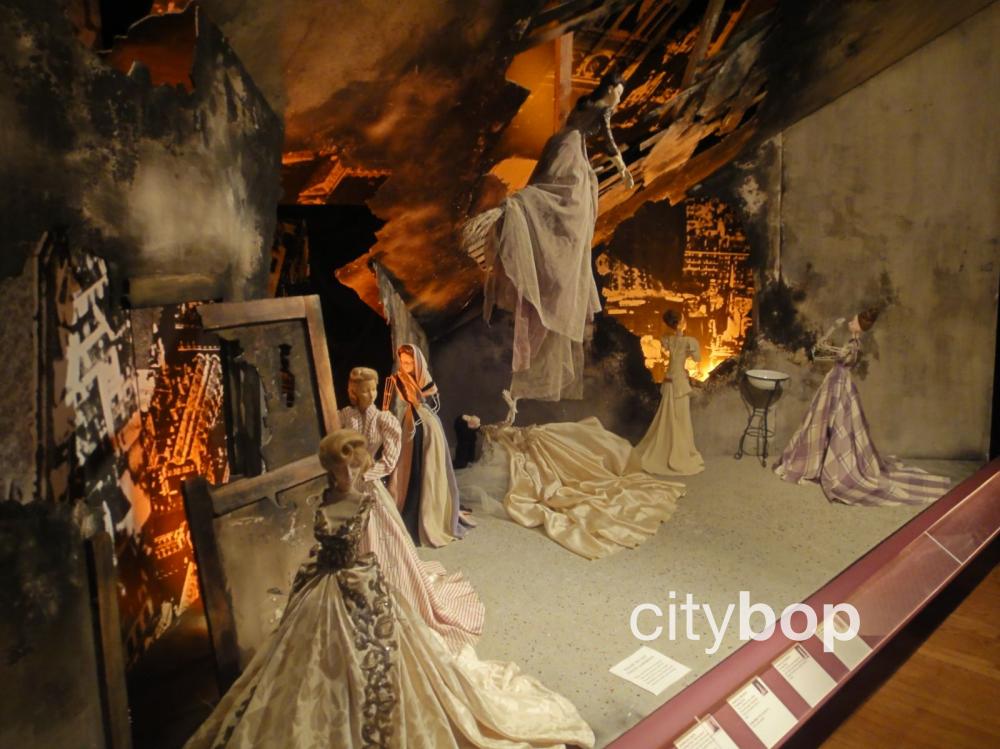 The stage is inside a maid's room, with walls blown out to show a fire ravaged Paris. 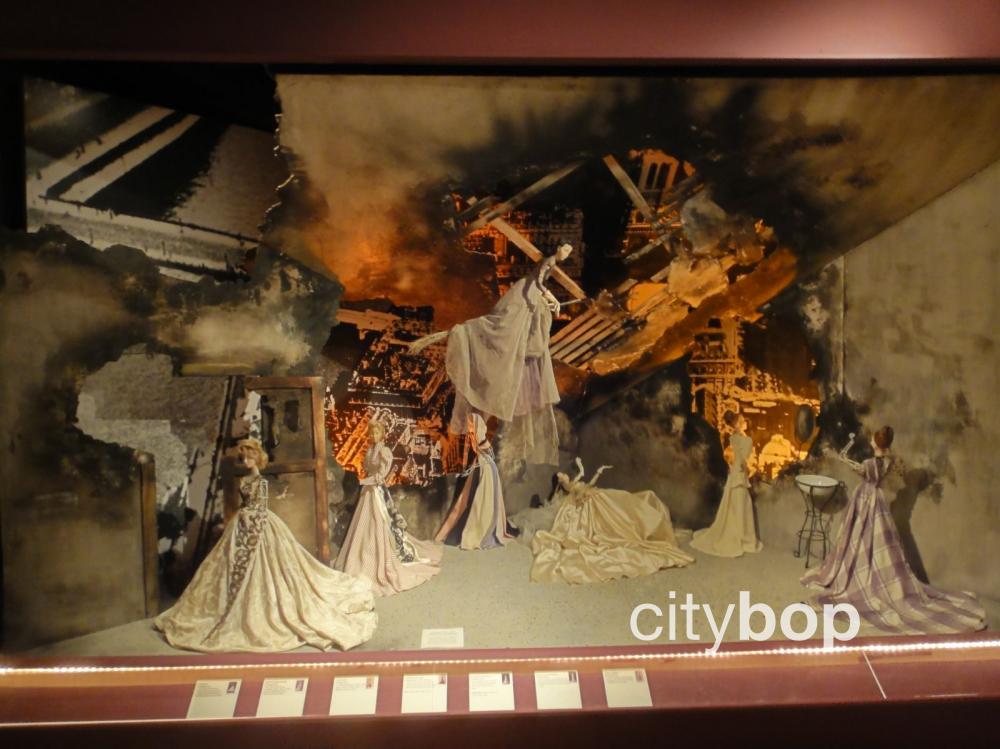 Ladies stand around to observe the chaos.  One is standing at a wash station and others are cowering by the walls in this frightening scene. 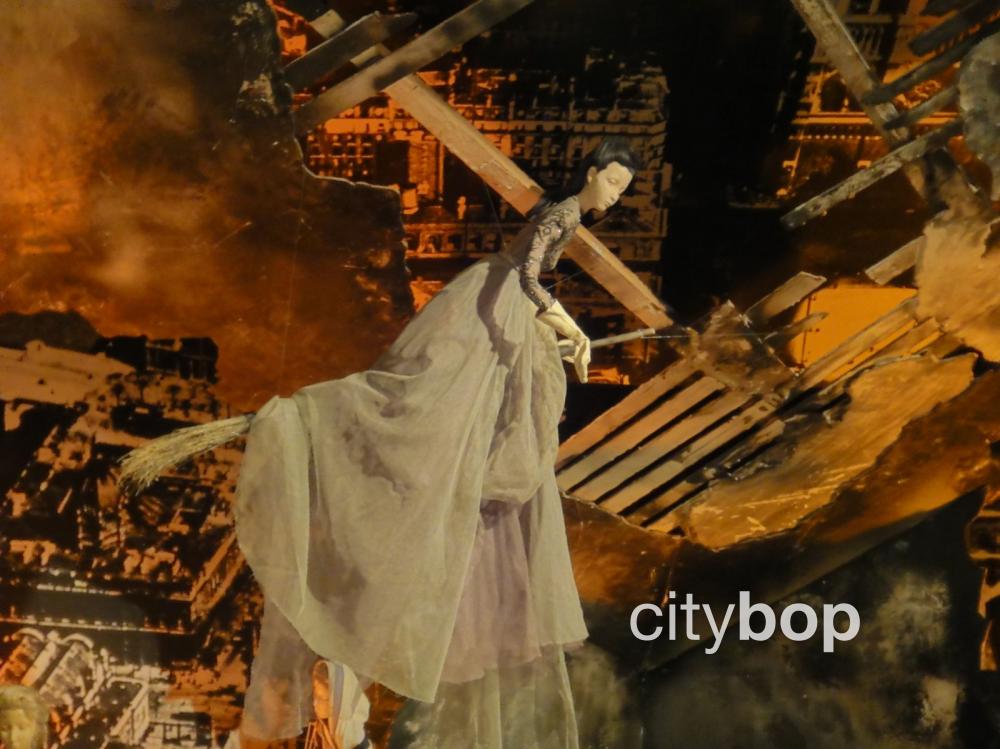 3. The next stage at Theater de la Mode is a chic Parisian Street Scene.

The second stage at the Maryhill Museum was created by artist Georges Wakhevitch.  He was a Russian emigre who studied painting and drawing in 1930s, getting his first big break by designing a film set in 1931.  His career blossomed, and he produced hundreds of sets for the opera, plays and films. The Parisian Street Scene at the Maryhill Museum embodies all the sophistication and glamour of Paris. 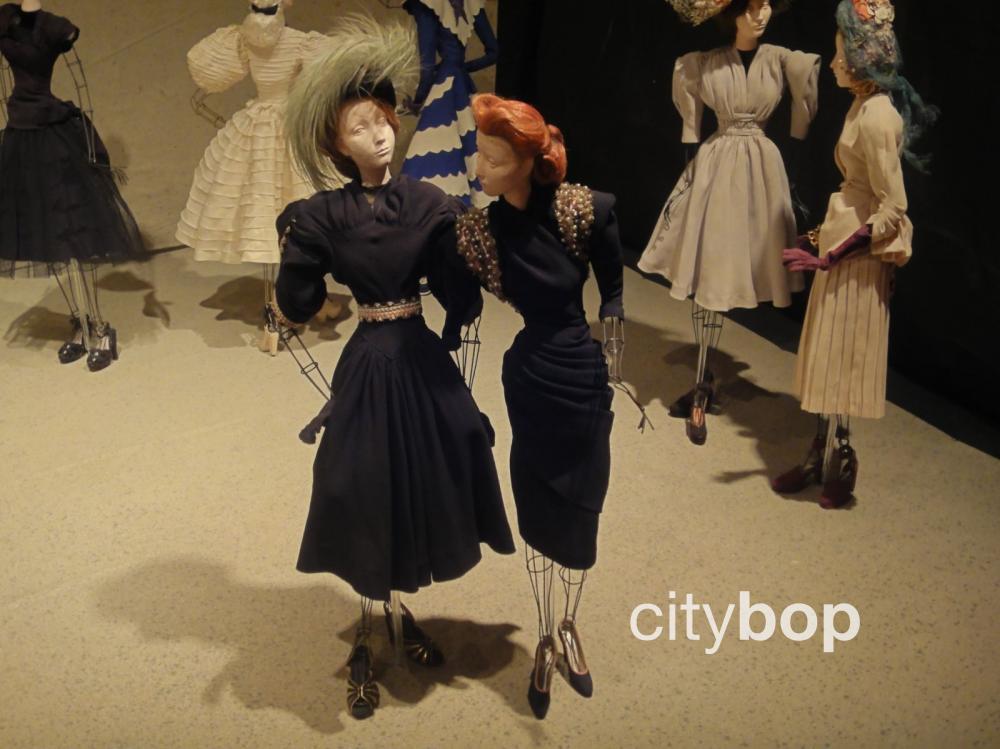 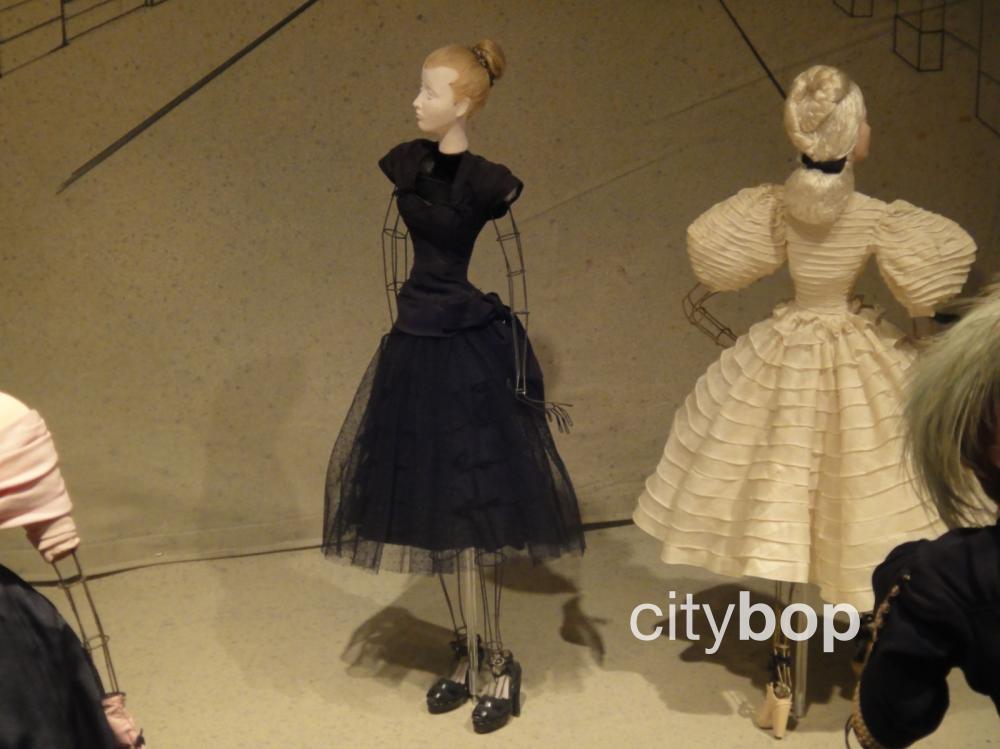 These late 1940s fashions have feminine silhouettes, with cinched in waistlines and full skirts. There's incredible attention to detail.  Some of the mannequins even have undergarments. 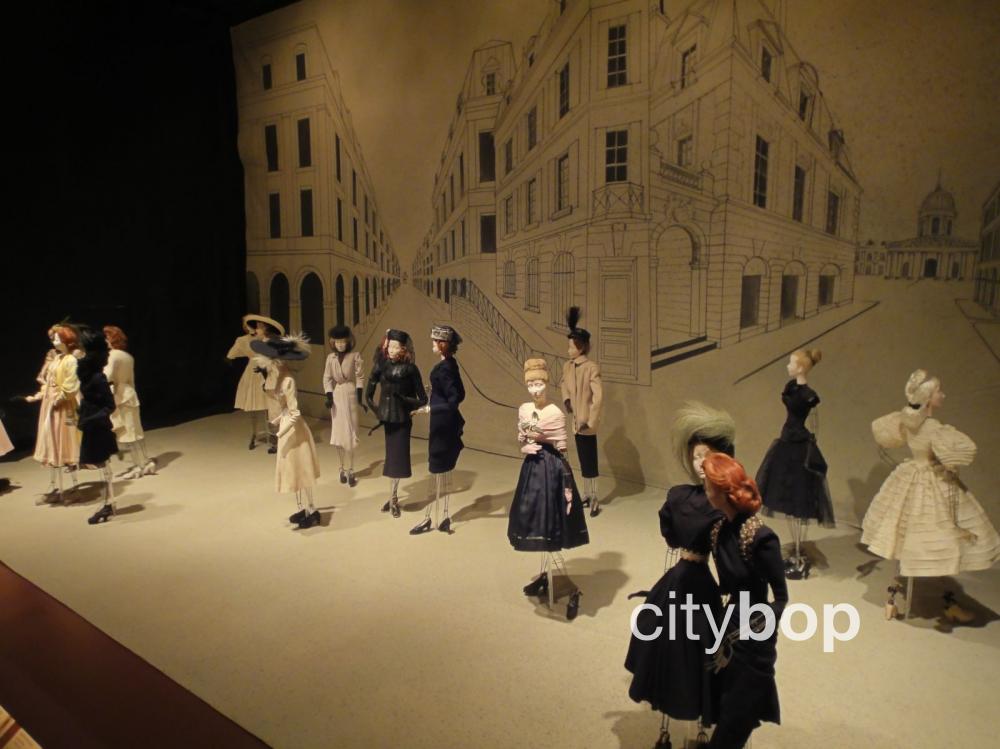 The buttons and zippers on each dress are fully functional. 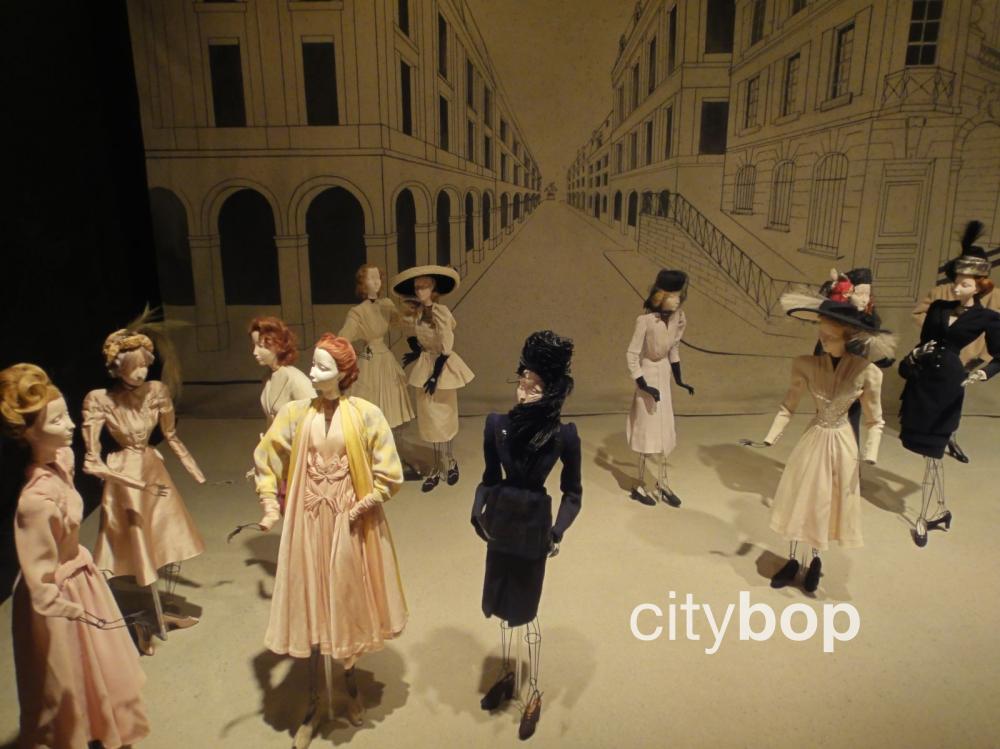 Unfortunately the individual jewelry pieces provided by Cartier and Van Cleef and Arpels, were taken back to Europe after the U.S. tour, so are not on display at the Maryhill Museum.

4. The final set at Theater de la Mode is an outline of famous Paris landmarks.

The final set for the Theater de la Mode at Maryhill Museum is known as the Croquis de Paris.  It was created by sculptor Jean Saint-Martin with miniature models constructed from wire. 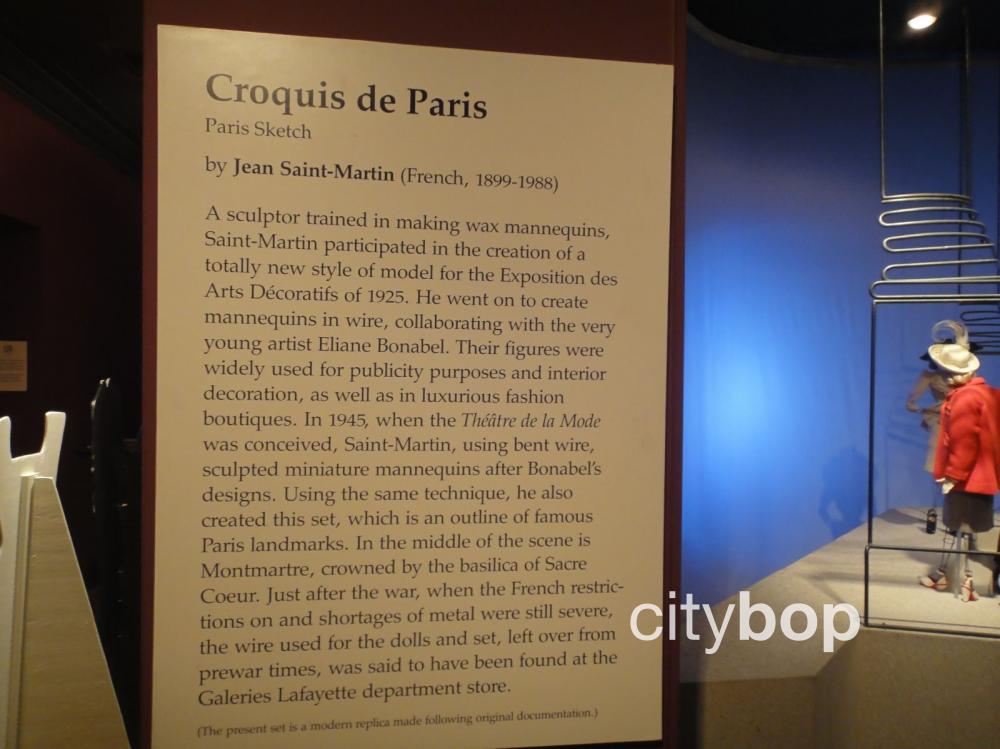 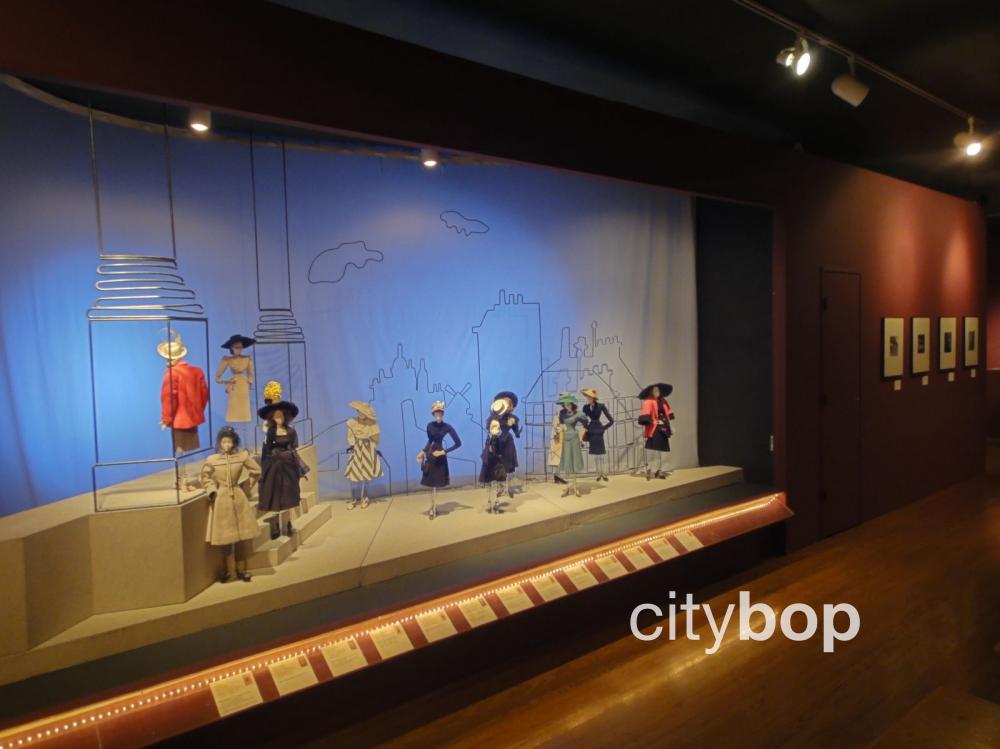 The set depicts famous Paris landmarks like the Montmartre, and Sacre Coeur Basilica. 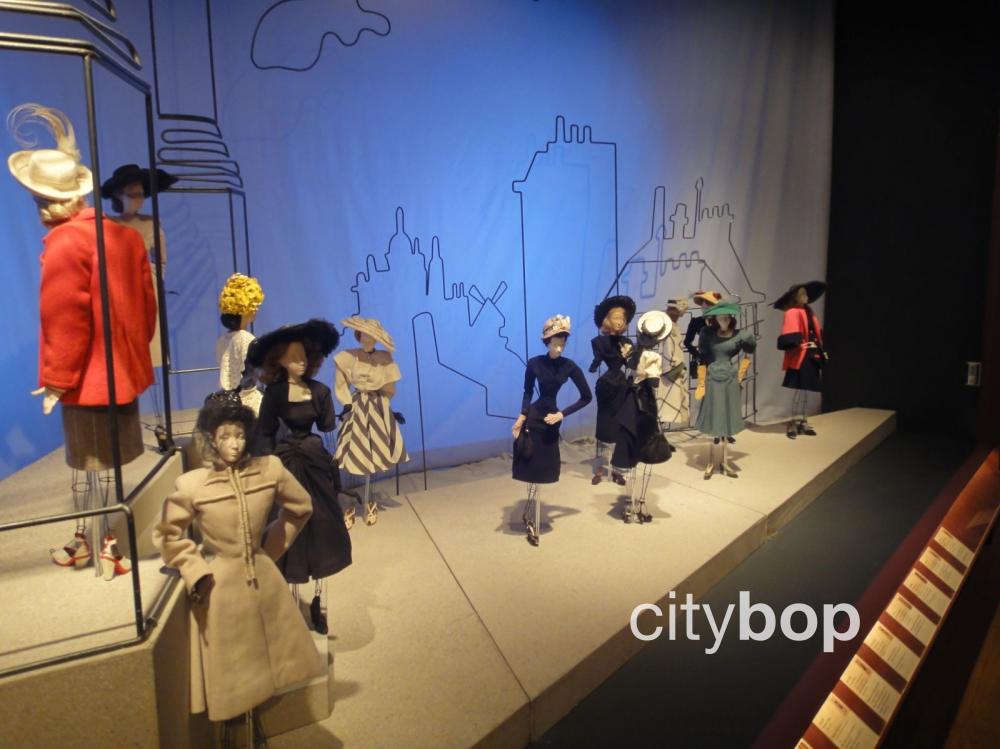 Look at those gorgeous hats.  They were created by professional milliners. 5. See a ball gown from the Queen of Romania, who attended Maryhill Museum's dedication ceremony in 1926.

The first floor of the Maryhill Museum displays a stunning ball gown Queen Marie wore to the coronation of her cousin Russian Emperor Nicholas II in 1896.

Maryhill was dedicated as a museum in 1926 at a lavish ceremony attended by 2,000 people, including the Queen of Romania. However, the Maryhill Museum didn't open to the public until 1940 due to several delays, including founder Samuel Hill's death in 1931.

The mansion was originally built as a primary residence by entrepreneur Samuel Hill, who attempted to establish a Quaker farmland community in the local area at the newly established Maryhill township. Construction began on the mansion in 1914, but stopped in 1917 when it became apparent that the farming community wasn't viable due to lack of irrigation and isolation. The founder of Maryhill Museum, Samuel Hill, was close friends with famous dancer and socialite Loie Fuller, who suggested the mansion instead become an art gallery.

Many of the pieces were donated by Samuel Hill's friends; socialite Loie Fuller, the Queen of Romania, and Alma Spreckels, the wife of a wealthy San Francisco industrialist. Alma Spreckels was also close friends with Loie Fuller, who had introduced her to artistic circles in Europe, and helped her to gain an appreciation of high art.

6. Go to the main floor to see furniture from 19th century Romanian palaces.

7. See an Auguste Rodin Collection at the Maryhill Museum.

A key attraction at the Maryhill Museum is the Auguste Rodin collection on the lower floor, including a model of his famous sculpture The Thinker.

In 1921, the museum's founder Samuel Hill purchased plaster models and drawings by Rodin, from famous American actress and dancer Loie Fuller. Loie Fuller became the darling of avant-garde Paris in the late 1890's when she pioneered a new modern dance and innovative theatrical lighting techniques.  Her most famous dance was the Serpentine Dance, with billowing, swirling yards of silk.

Loie Fuller was a close and influential friend of the founder of Maryhill Museum, Samuel Hill. 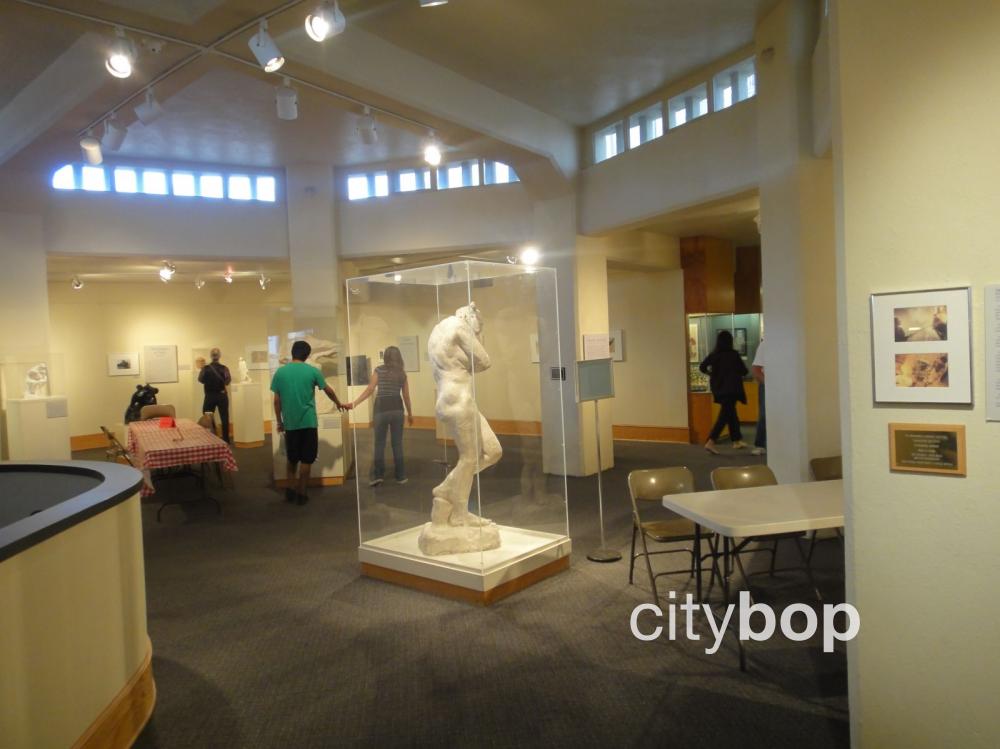 Although the Maryhill Museum is in possession of a number of original Rodin drawings and watercolors, these fragile items are not on display to the public at the request of the Musee Rodin in Paris, to ensure their longevity.  Photographic copies have instead been made for the public to view.

8. Stroll the beautiful gardens at Maryhill Museum to see a dozen sculptures.

The beautiful, lawned gardens of the Maryhill Museum have stunning vistas over the Columbia River.  See a dozen sculptures from renowned Northwest artists. 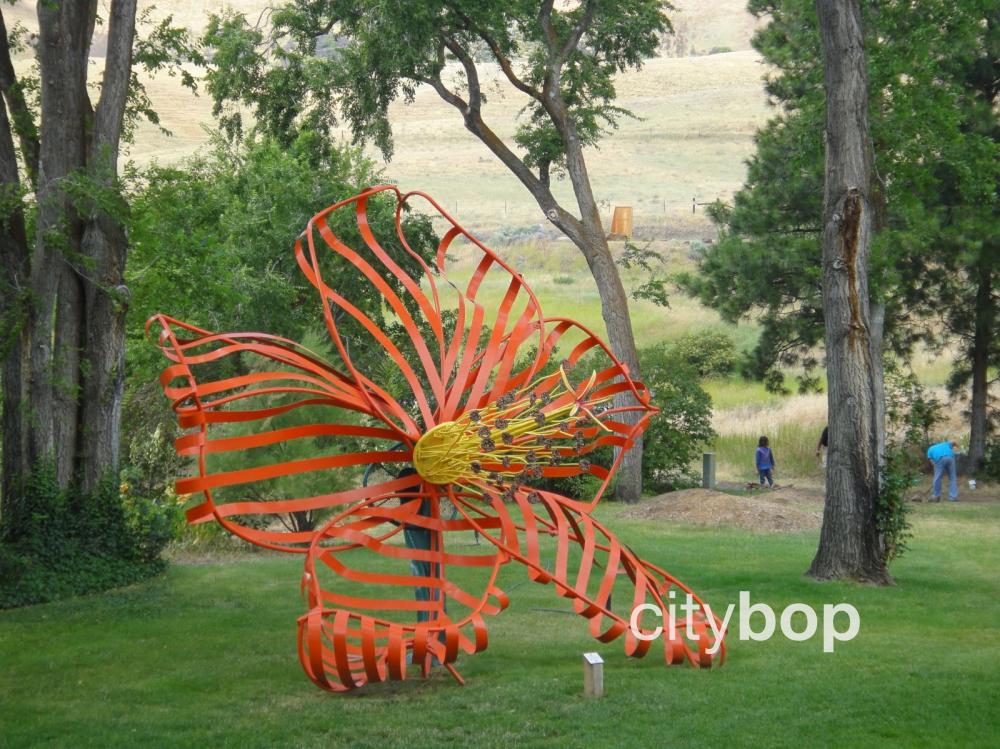 9. The Stonehenge Memorial is a short drive from Maryhill Museum.

The Stonehenge Memorial is a short drive from Maryhill Museum, and is FREE to visit. Samuel Hill, the founder of the Maryhill Museum, commissioned a full scale replica of Stonehenge.  He was under the incorrect belief that Stonehenge was a sacrificial altar, and so built this memorial to honor the sacrifice of the Klickitat County men who perished during WWI.  It was dedicated on July 4, 1918. 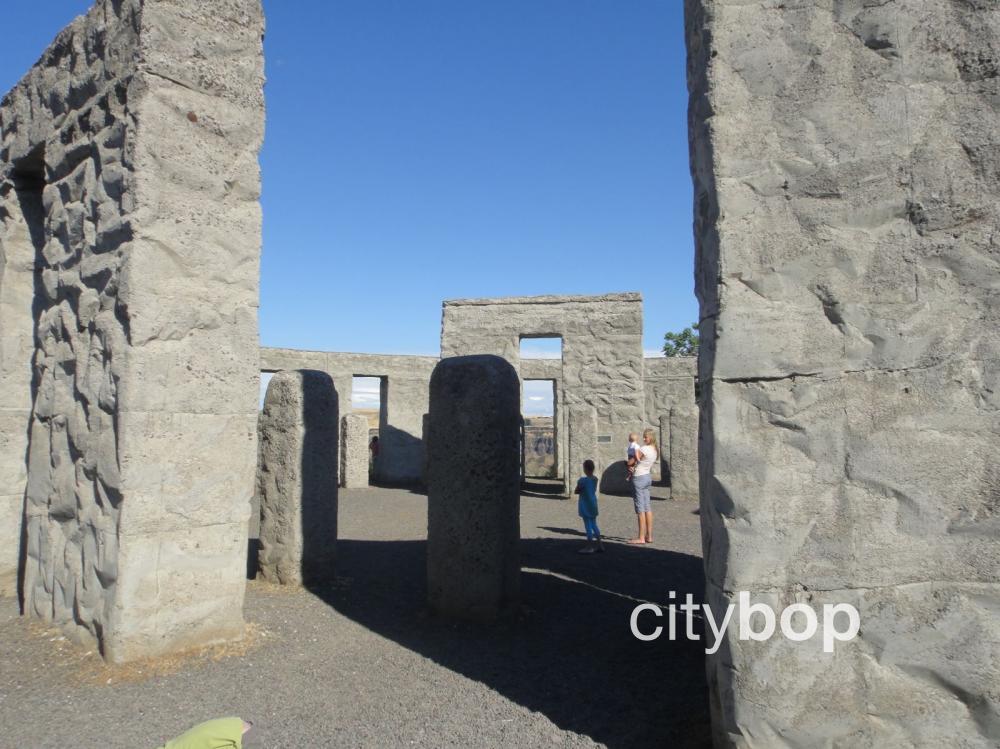 10. Stop by the award winning Maryhill Winery, just 1-mile from the Maryhill Museum. Places to stay near the Maryhill Museum.

The best place to stay is the popular tourist town of Hood River 40-minutes west of the Maryhill Museum.  Use Hood River as a base to explore a wide range of attractions along both the Oregon and Washington sides of the Columbia River including the nearby Hood River Winery Loop, and Historic 19-mile Columbia River Highway that passes famous Multnomah Falls, Vista House and Oneonta Gorge.

The excellent Columbia Gorge Discovery Center is only 30-minutes west of Maryhill Museum at The Dalles, and has superb exhibits detailing the cultural and geological history of the area.