Tour the oldest lighthouse in Puget Sound near Seattle.

The Point No Point Lighthouse is 1-hour from Seattle, on the northeast tip of the Kitsap Peninsula in Hansville.

To get there from Seattle, take the Bainbridge Island Ferry (25-minutes) then drive 30-minutes north to Hansville. The lighthouse is located at 9009 Point No Point NE Road in Hansville.

The Point No Point Lighthouse was first lit in 1880 and is the oldest lighthouse in Puget Sound.  It's on a quarter mile spit that juts out into Puget Sound, and is flanked on either side by sandy beaches, popular with visitors during summer months.  On a clear day there are spectacular views of Mt Baker.

Why is it called Point No Point?

U.S. Navy Lieutenant Charles Wilke named it Point No Point during his U.S. Exploring Expedition in 1841, after being frustrated that he couldn't find a more substantial point with a deep water harbor.

5 best things to do at Point No Point Lighthouse 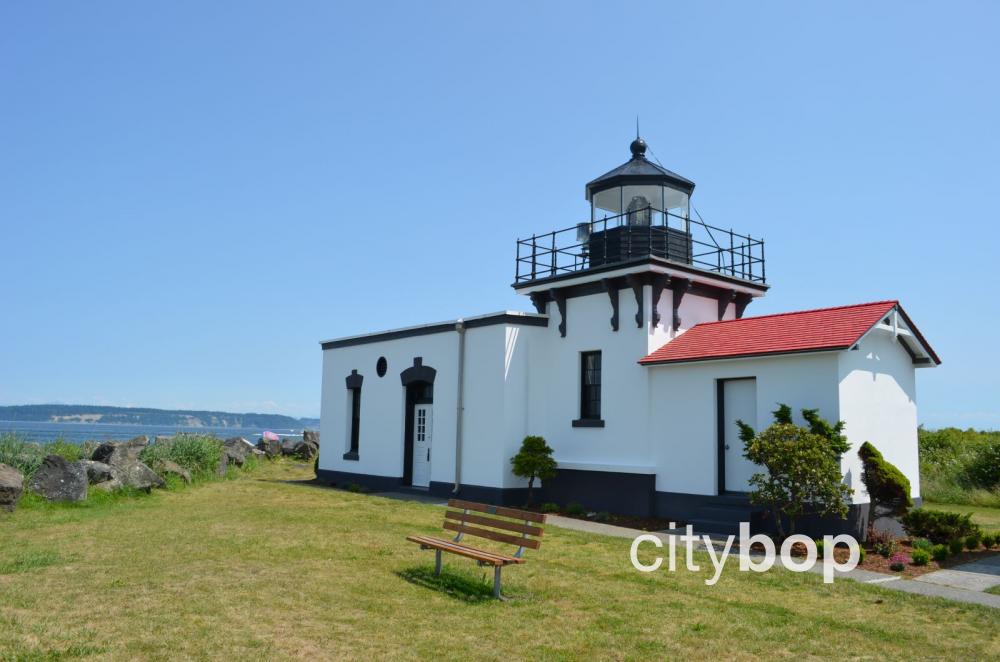 1. Do a fascinating tour of Point No Point Lighthouse.

Point no Point Lighthouse tours are usually only available from April to September, on weekends (check tour schedule).

The lighthouse was constructed in 1879, after Congress recognized a pressing need to protect shipping commerce around Puget Sound and the busy port of Seattle.

When the Point No Point Lighthouse was first lit on January 1, 1880, the fresnel lens had not arrived, so a kerosene lamp was used instead.  To make matters worse, the lantern room was windowless, and wild winter winds ripped through the tower making it extremely difficult to keep the kerosene lamp lit. The fresnel lens and windows didn't arrive until a few weeks later!

It was a difficult, isolated life at the Point No Point Lighthouse, and the nearest supplies were 4-miles away at Port Gamble. The first lighthouse keeper had three children, but lost his youngest daughter to scarlet fever at age 6.  He also had an altercation with a belligerent Assistant Keeper who locked himself inside the Point No Point Lighthouse and threatened him with a gun. The first Lighthouse Keeper ultimately ended up returning to his first profession, dentistry. 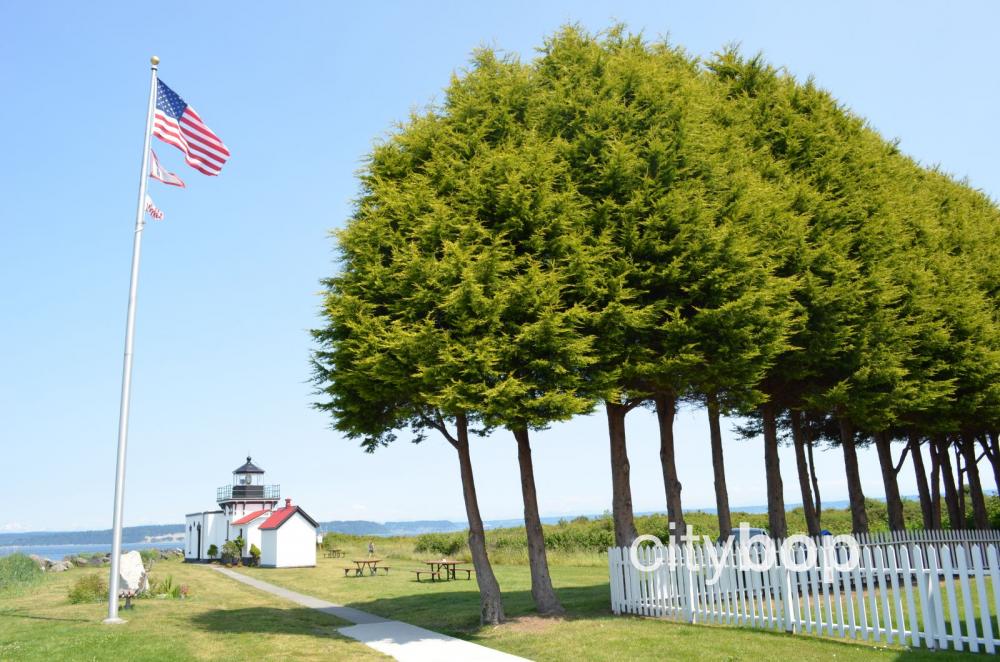 The Point No Point Lighthouse was finally automated a hundred years later in 1977, but still serves as an important navigational aid for ships making their way down to Seattle, as they transition from Admiralty Inlet to Puget Sound. 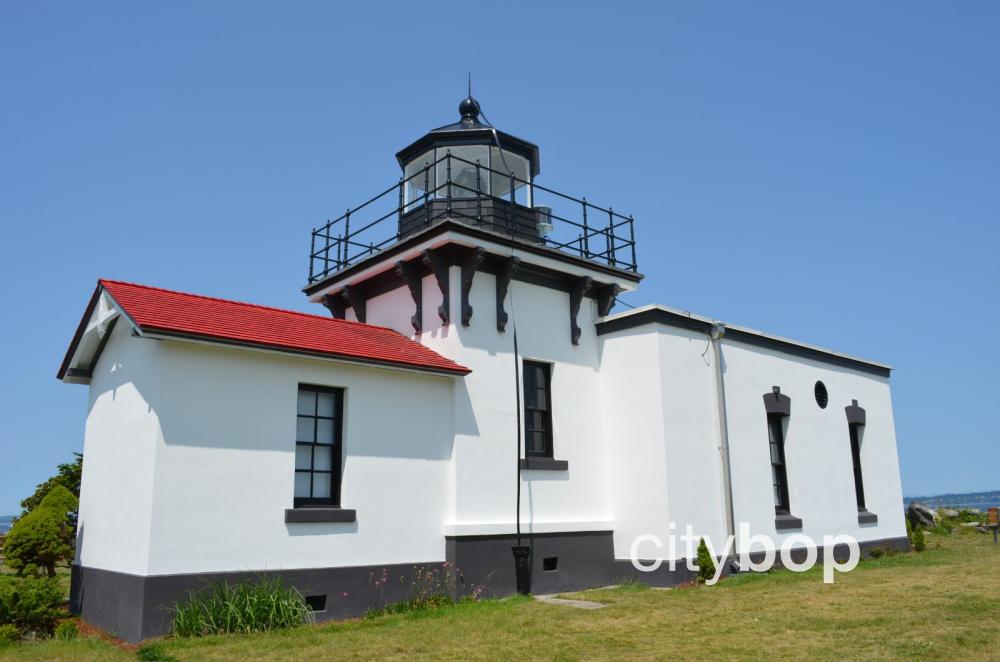 The 10 by 12 foot watchroom (left of the tower) was constructed in 1879. The fog signal room (on the right) was later added in 1898.  There are no formal stairs up to the lantern room, only a basic ladder.  The lawned area out front was used as vegetable garden, as the Lighthouse Keepers had to learn how to supplement the limited food they were provided.

2. Spend a beach day near Point No Point Lighthouse.

Bring your umbrella, towel and beach toys for the kids, and sink your feet in the golden sands near Point No Point Lighthouse.  The water is below 50 degrees, so too chilly for swimming, but this is still a relaxing place to spend the day. Look at those gorgeous views out to snow-capped Mt Baker!  There's a passing parade of leisure boats and warships, and you might even be lucky enough to spot a whale! 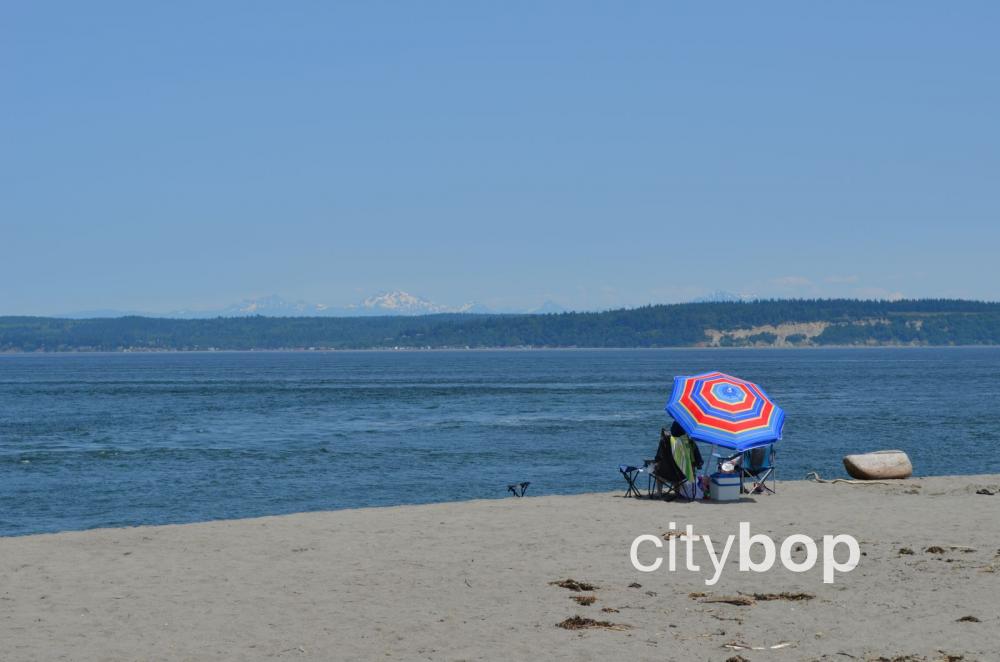 The Native Indians called this spit "Long Nose" or Hahdskus, identifying it as the most northern tip of Kitsap County.

In 1855 they relinquished all rights to this land by signing the Point No Point Treaty.  In return, they received a tract of land around the Hood Canal that could be used as a reservation, some monetary compensation, and ongoing fishing rights. 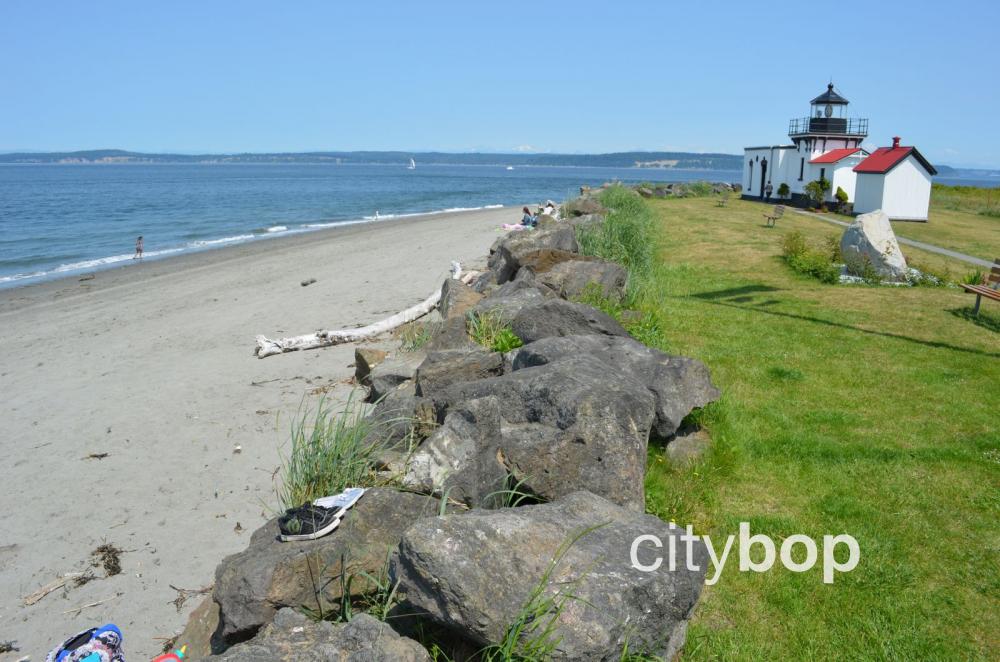 The Point No Point Lighthouse is positioned on Admiralty Inlet, and overlooks both Whidbey Island and Marrowstone Island to the north. 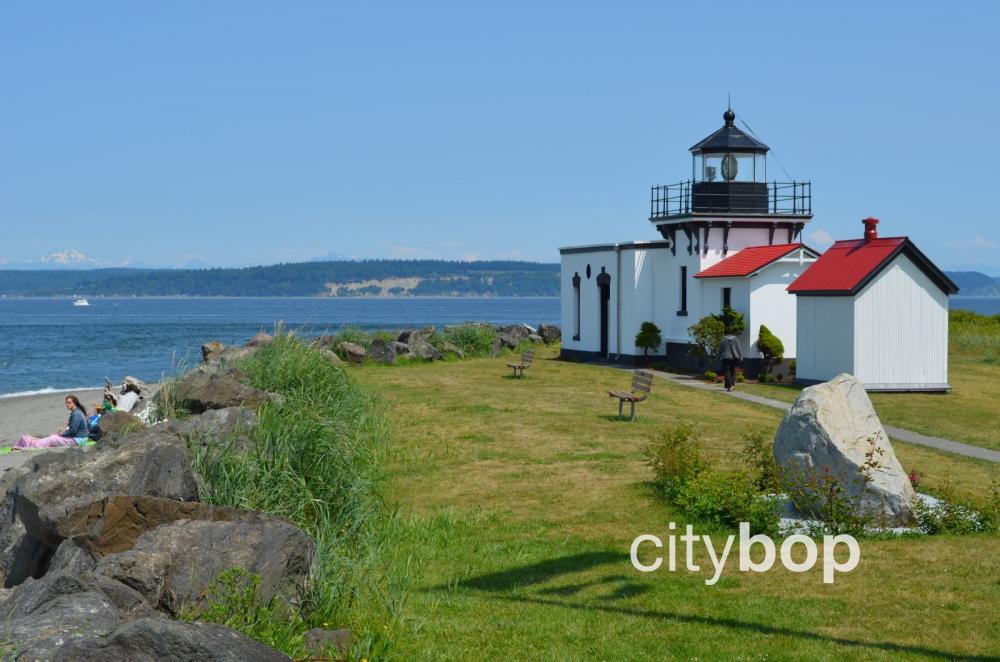 4. Go birdwatching in the wetlands behind Point no Point Lighthouse.

There's also a wetlands area directly behind the spit, with abundant bird life like soaring bald eagles, jaegers, cormorants, ducks and raptors. Bring your binoculars and see which bird species you can recognize. 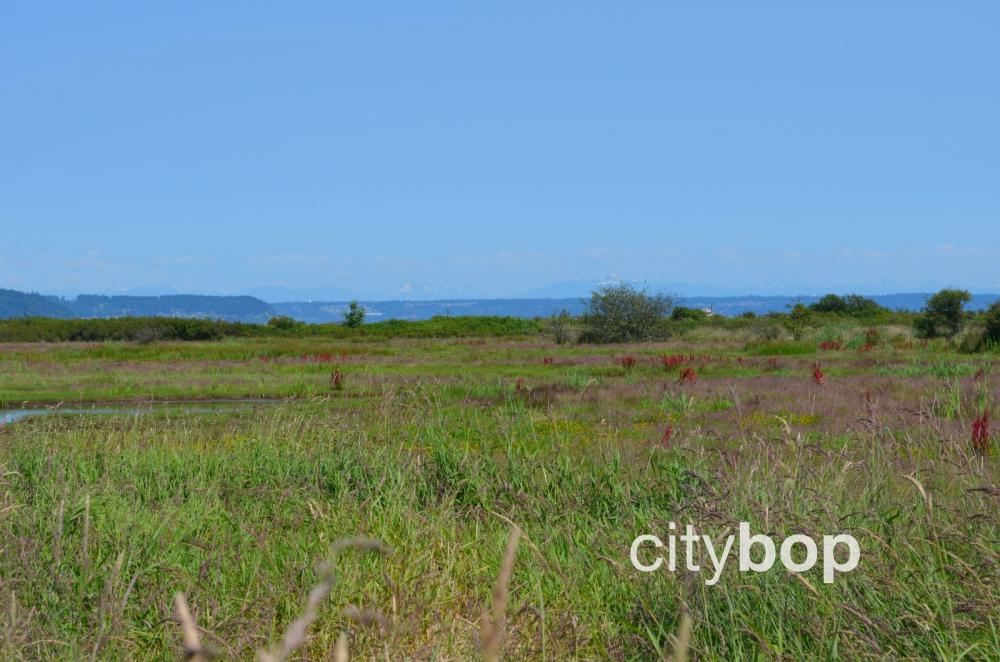 5. Book an exciting overnight stay at the Lighthouse Keeper's Quarters.

This remarkable property is available as a vacation rental. Quiet evenings can be spent watching the glow of the Point No Point Lighthouse from the living room, or relaxing on the front porch.  Each room provides unsurpassed views of Puget Sound. There's a living room, formal dining room and library/study downstairs, and two bedrooms upstairs with a queen bed and two single beds. 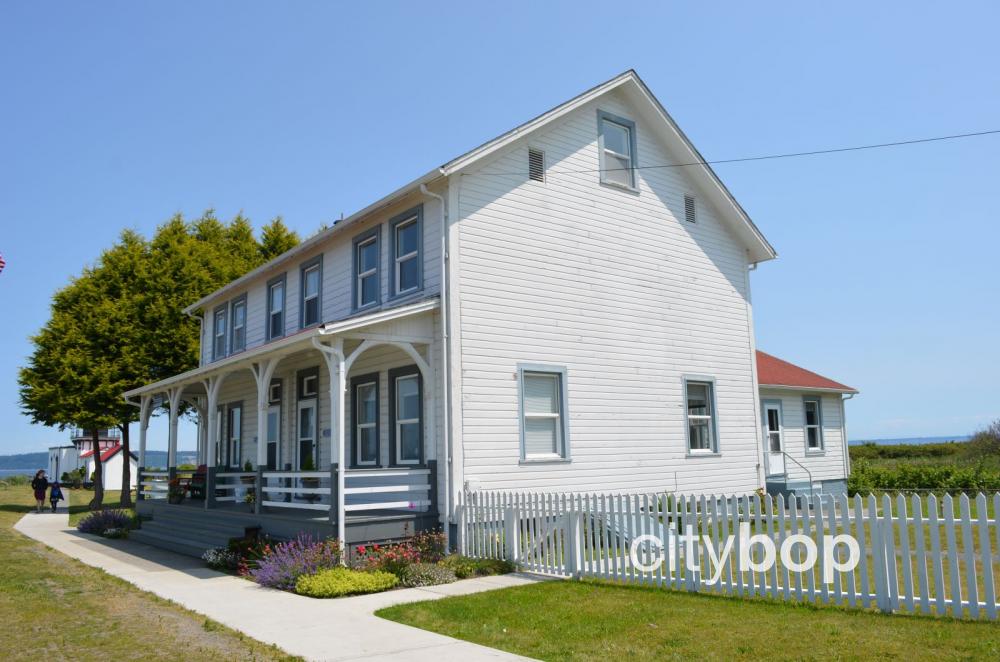 As you can see from this photo, the Lighthouse Keeper's Quarters is actually a duplex, with the vacation rental on the left, and the headquarters for the U.S. Lighthouse Society on the right. 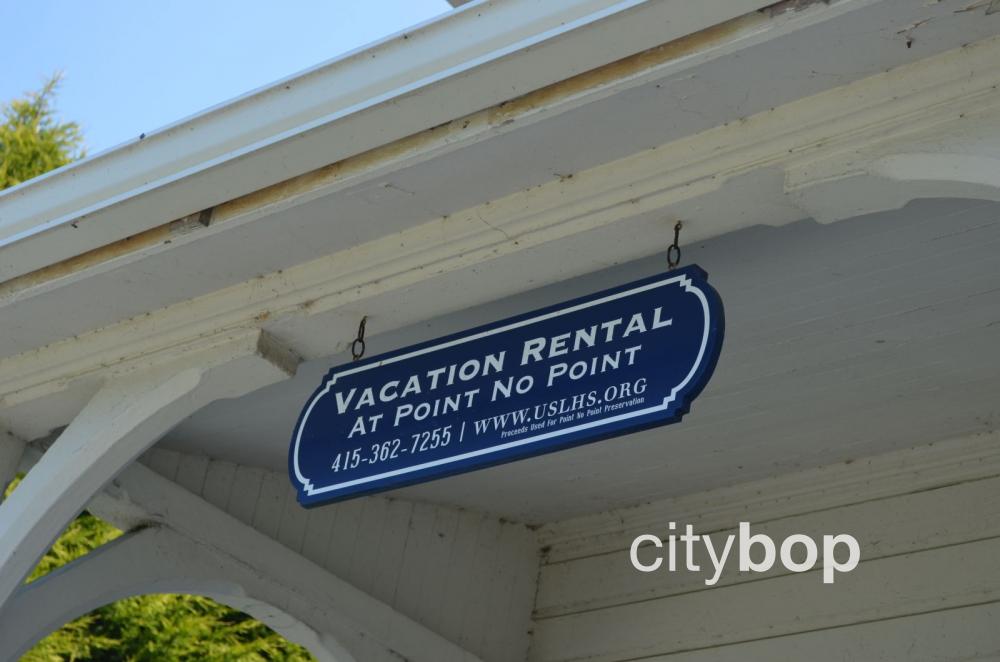 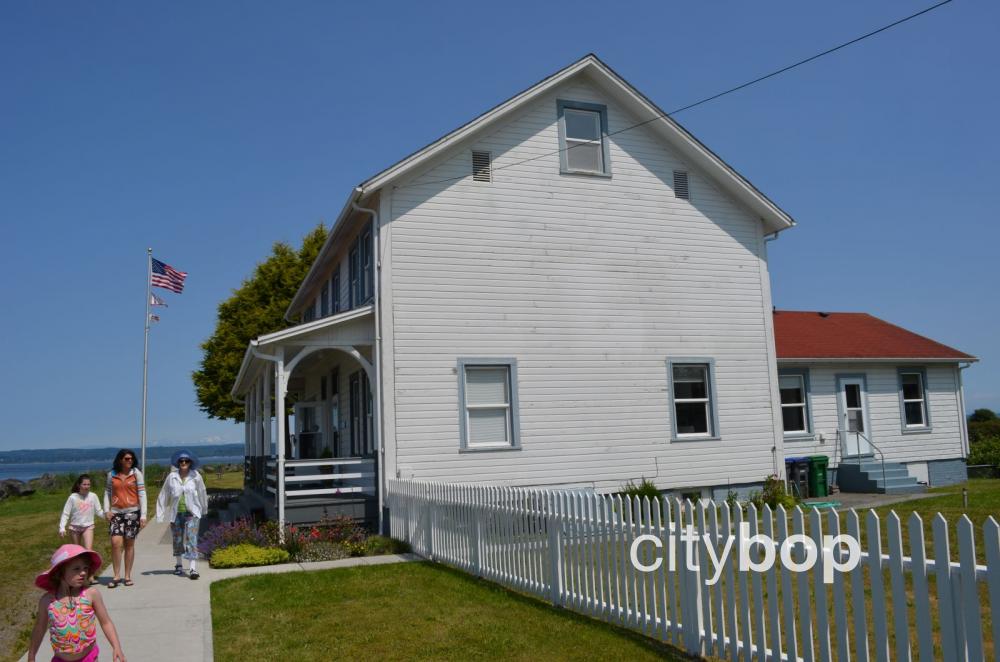 Things to do near the Point no Point Lighthouse.

Visit the charming nearby town of Port Gamble with stunning views of Puget Sound, cute gift shops, and a fascinating museum.

Drive 16-miles to the Scandinavian, waterfront town of Poulsbo for a meal, and stop by the free SEA Discovery Center with touchtanks full of starfish.

Travel 23-miles south to Winslow on Bainbridge Island to explore its bustling main street, then stroll through Bloedel Reserve to see beautiful gardens and a chateau.

Military history enthusiasts will enjoy the free Naval Undersea Museum at Keyport, 21-miles away.  Nearby Bremerton has a Vietnam-era navy destroyer open for tour, and an excellent naval museum.