Marrowstone Island is 2 hours north of Seattle on the northeast tip of the Olympic Peninsula near Port Townsend, and is connected to the mainland by a bridge.

To get to Marrowstone Island from Seattle, take the Bainbridge Island Ferry, then drive north-west for an hour before reaching a bridge to the island.

Marrowstone is a quieter island with very few amenities, other than the Nordland General Store, a seasonal cafe at Fort Flagler, and Marrowstone Vineyards. If you love serenity and an incredible island setting with soaring views, then look no further.

The highlight is spectacular Fort Flagler, with stunning trails and coastal scenery.

10 best things to do on Marrowstone Island

The best attraction on Marrowstone Island is Fort Flagler State Park, on the northern tip of the island.  It's a jawdroppingly beautiful place, especially on a blue sky day with views across to Whidbey Island.  Spend hours exploring trails through this park. See magnificent 19th century military buildings, and abandoned bunkers with stairs, tunnels and secret rooms.

Here's a map of all the beautiful hiking trails at Fort Flagler. 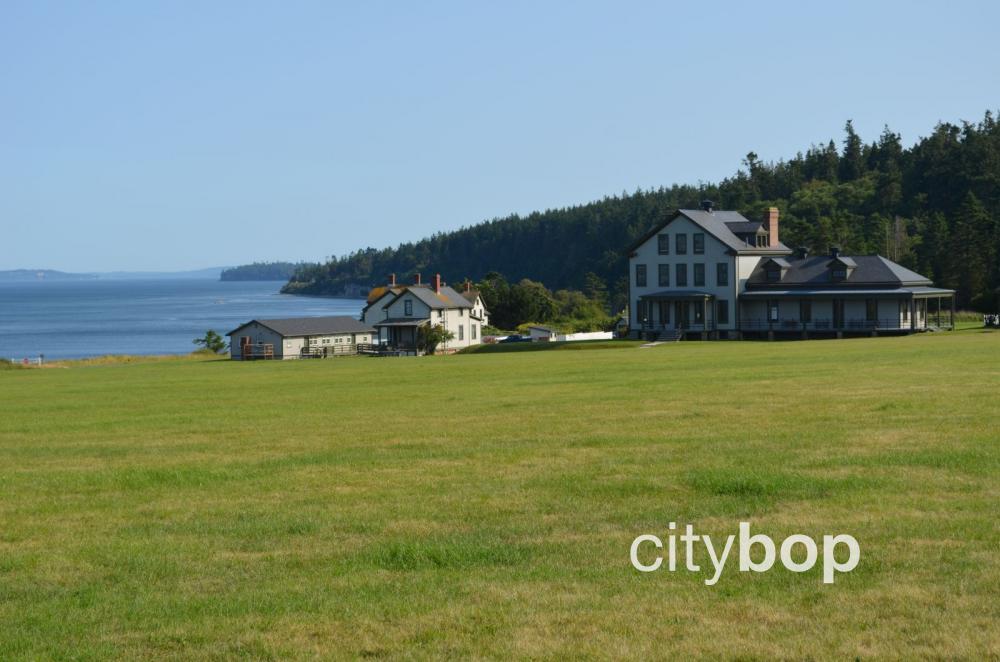 Enjoy amazing views across Admiralty Inlet to Whidbey Island and the North Cascades.  Glacier Peak (10,541 feet) is visible in the distance, and only one of two active volcanoes in Washington State that have erupted in the last 15,000 years. The other is Mt Saint Helens that erupted in 1980. 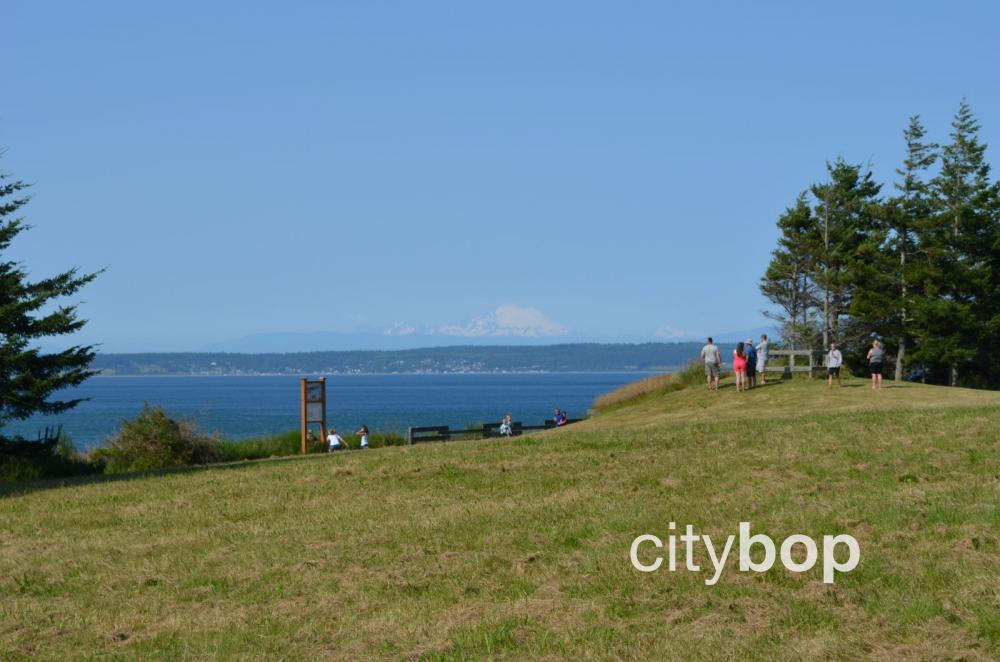 Explore 5-miles of walking trails and 2-miles of saltwater coastline at Fort Flagler on Marrowstone Island.  There are automated pay stations at Fort Flagler, to obtain a day use pass to visit here. 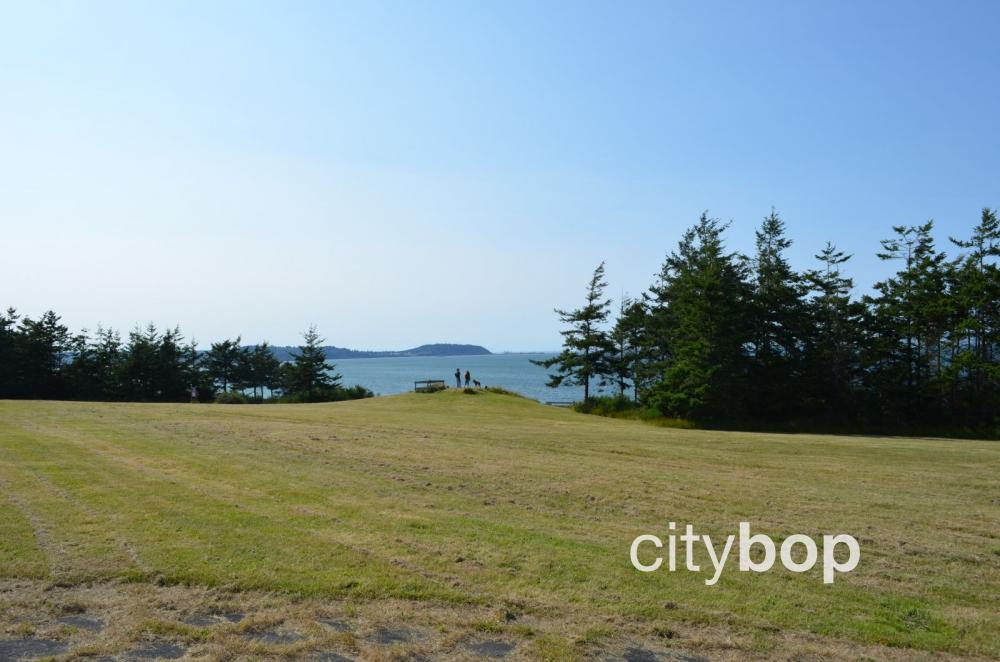 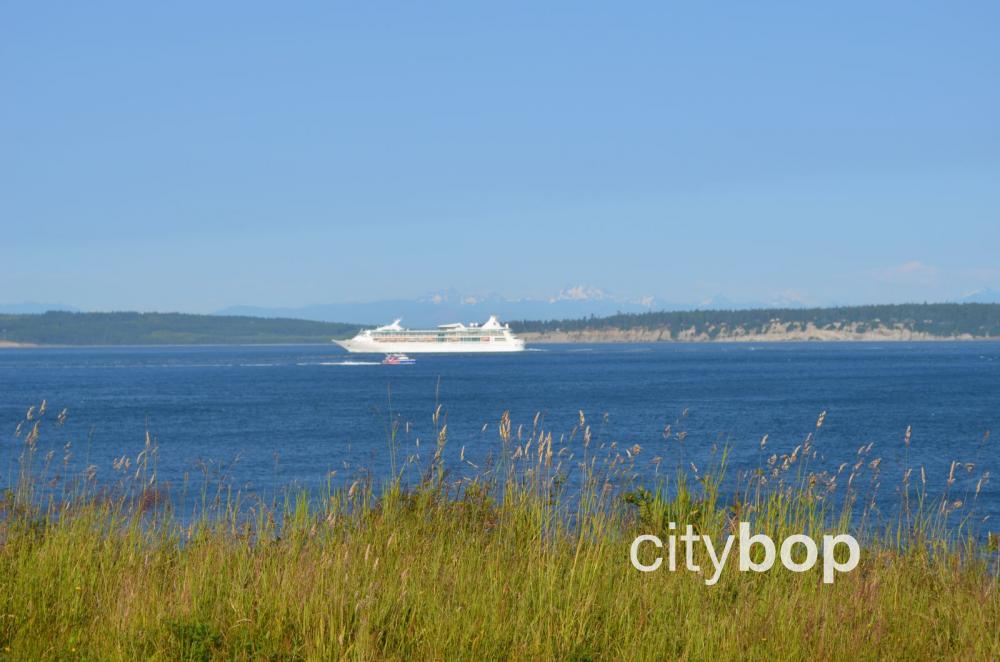 Walk along secluded pathways through shaded forest on Marrowstone Island, with wildlife spottings like deer and fawn. 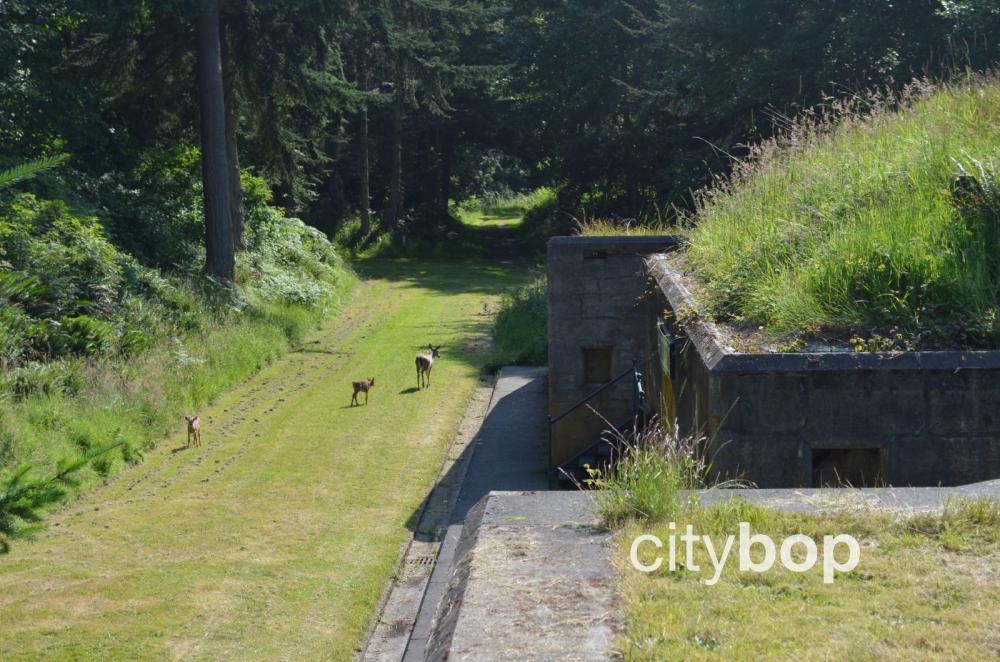 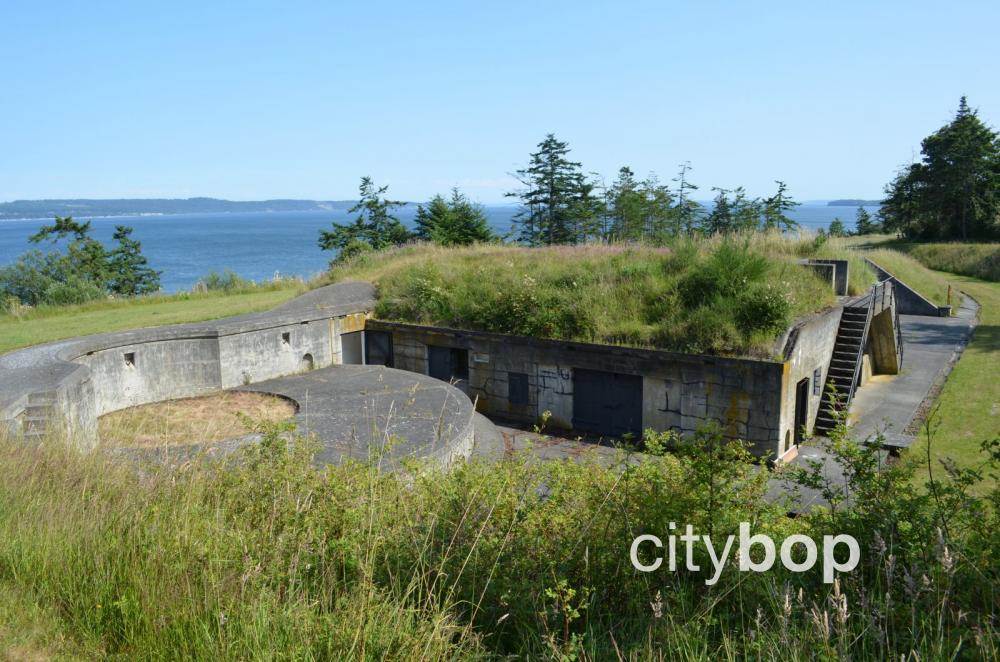 Fort Flagler was once part of a coastal defense system known as the "Ring of Fire" that guarded the nautical entrance to Puget Sound, and downstream cities like Seattle and Bremerton.  The other two forts were Fort Worden near Port Townsend, and Fort Casey on Whidbey Island.  Enemy ships entering Admiralty Inlet would be hit by a ring of gunfire from three directions. 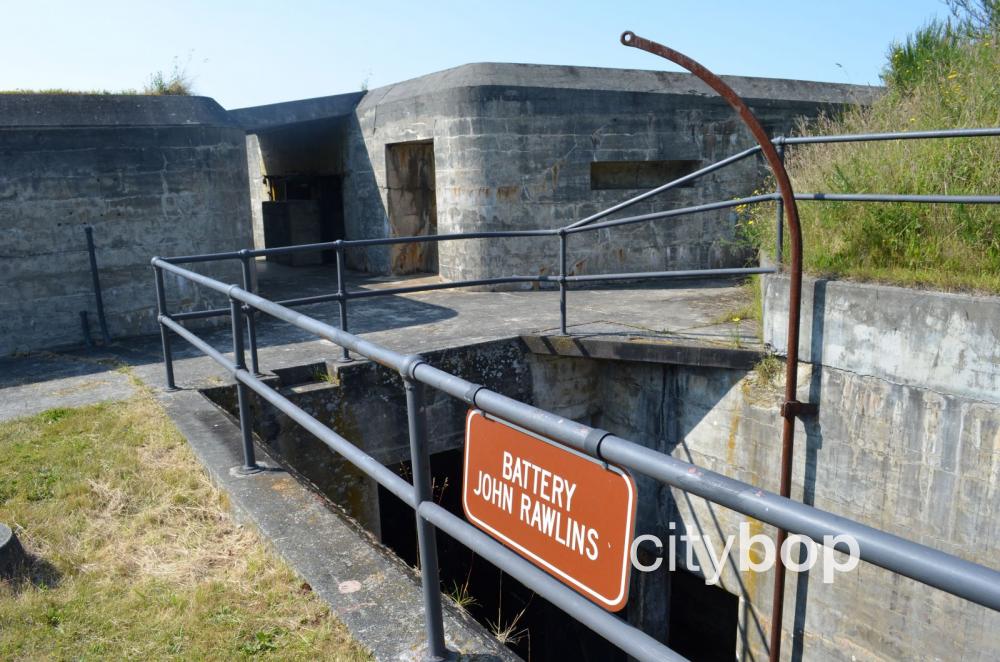 Construction began at Fort Flagler in 1897 and was completed in 1899.  The fort was active for WWI, WWII and the Korean War, and eventually closed in 1953, before becoming a state park in 1955. 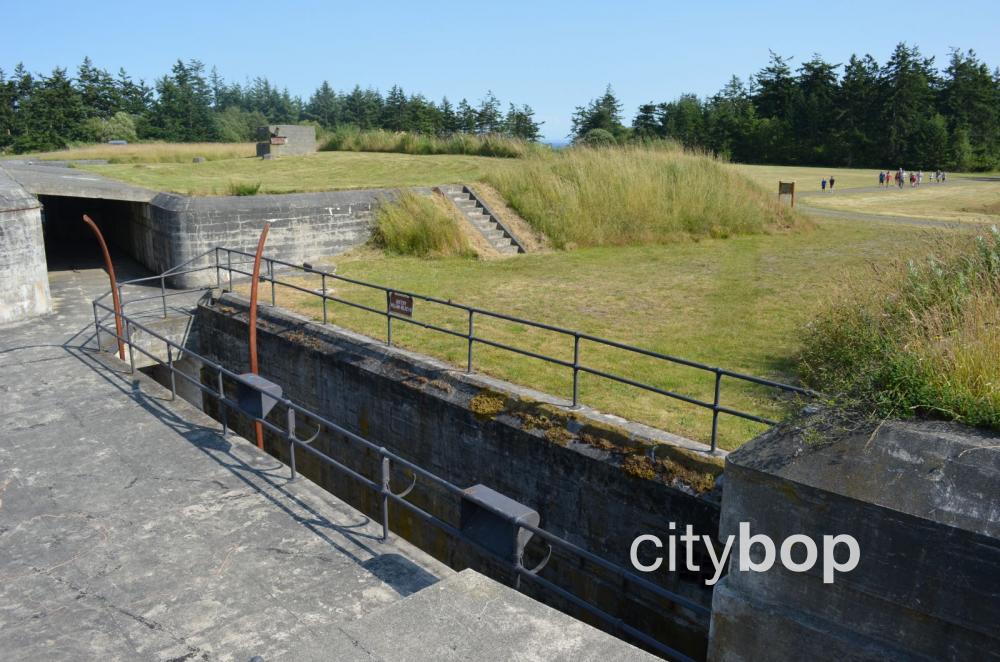 The opportunities for exploration at Fort Flager are endless, with so many nooks and crannies to set your imagination alight. 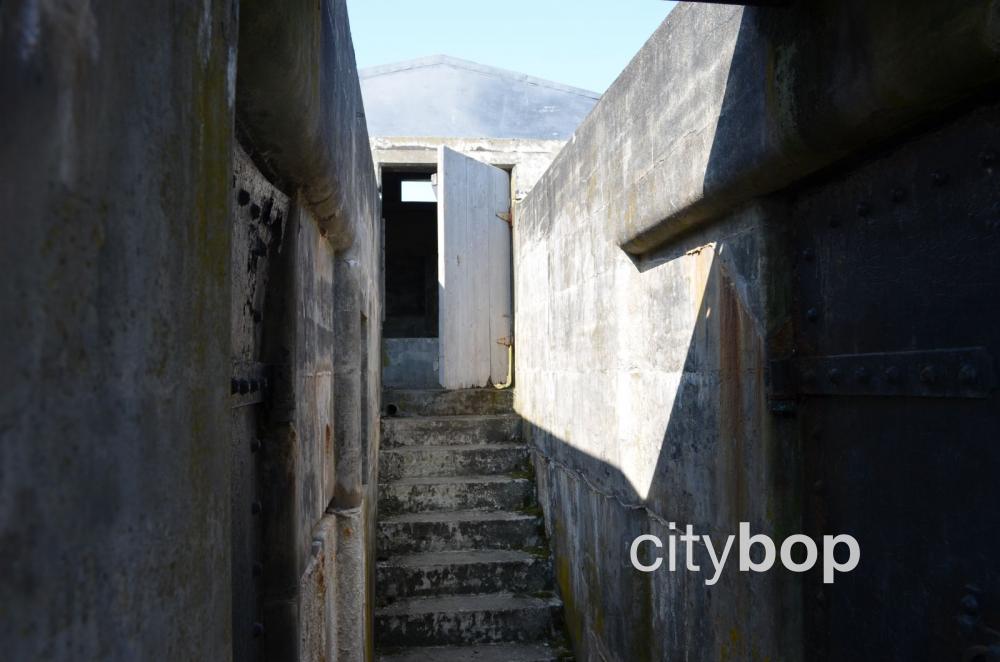 Don't forget to bring your flashlight! 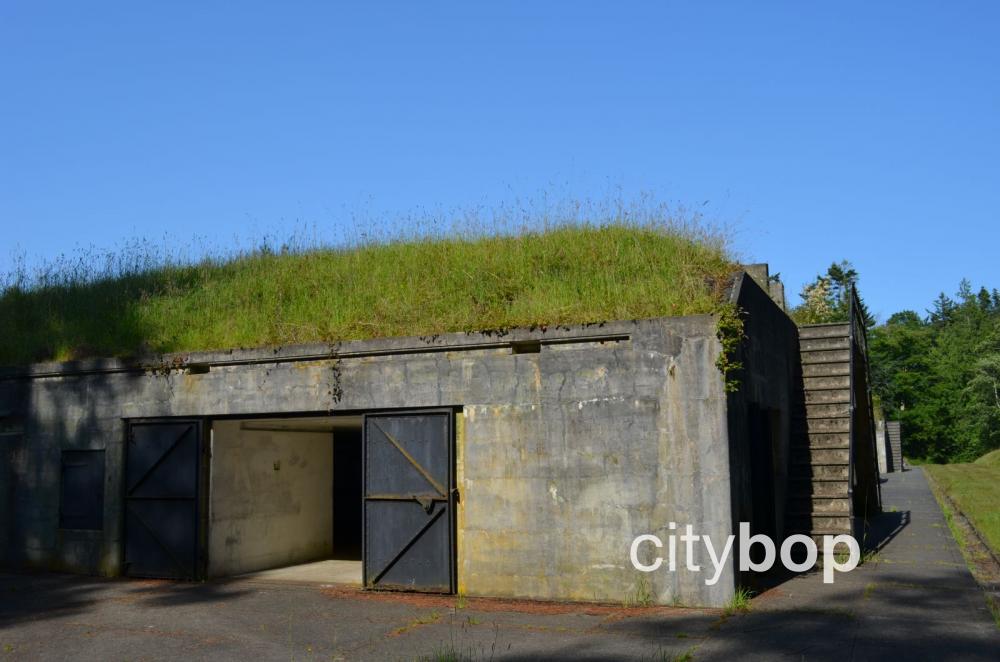 This is a gun emplacement at one of the large artillery batteries at Fort Flagler on Marrowstone Island.  The disappearing guns would be mounted on a carriage to get them in a firing position, then recoil for reloading.  The enemy invasion never happened, so the guns were only fired at training practice. 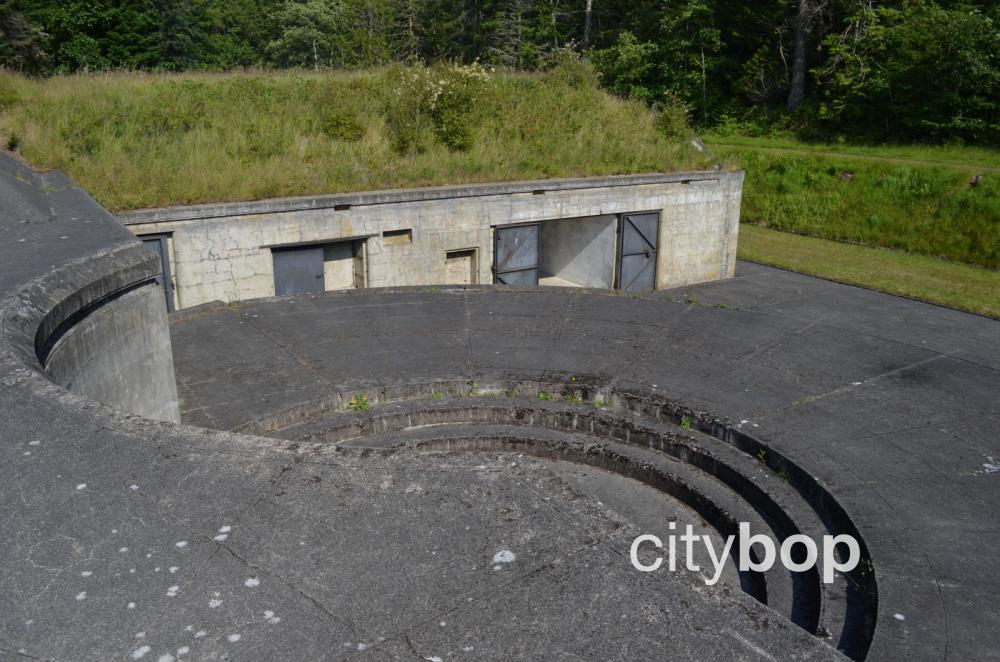 There are steep drop-offs at some of the batteries, so keep away from the edge. 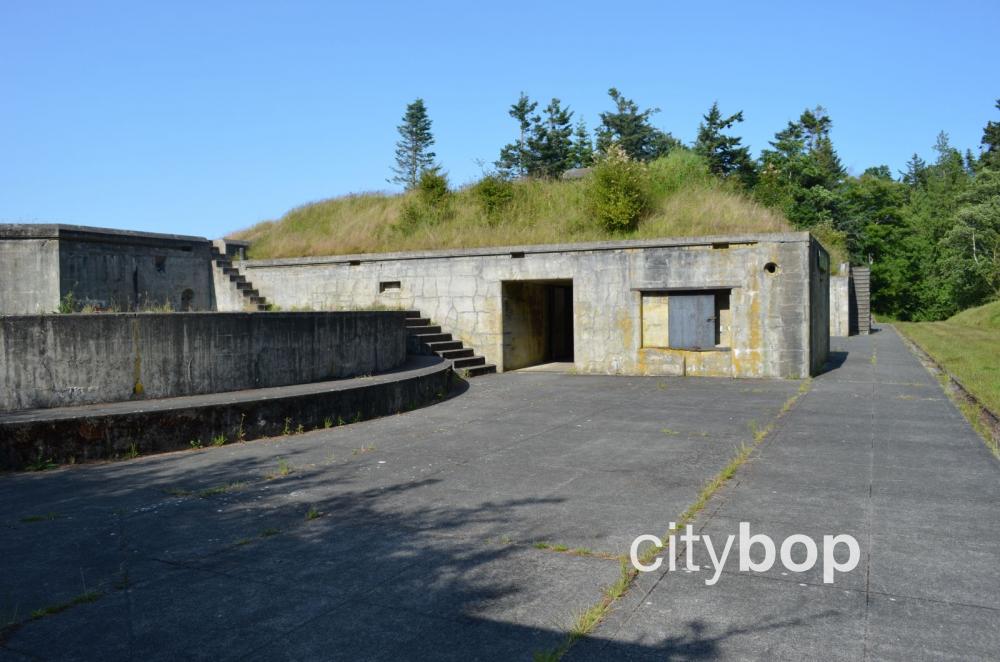 These low-lying batteries at Fort Flagler have been built into the slope, to evade detection. 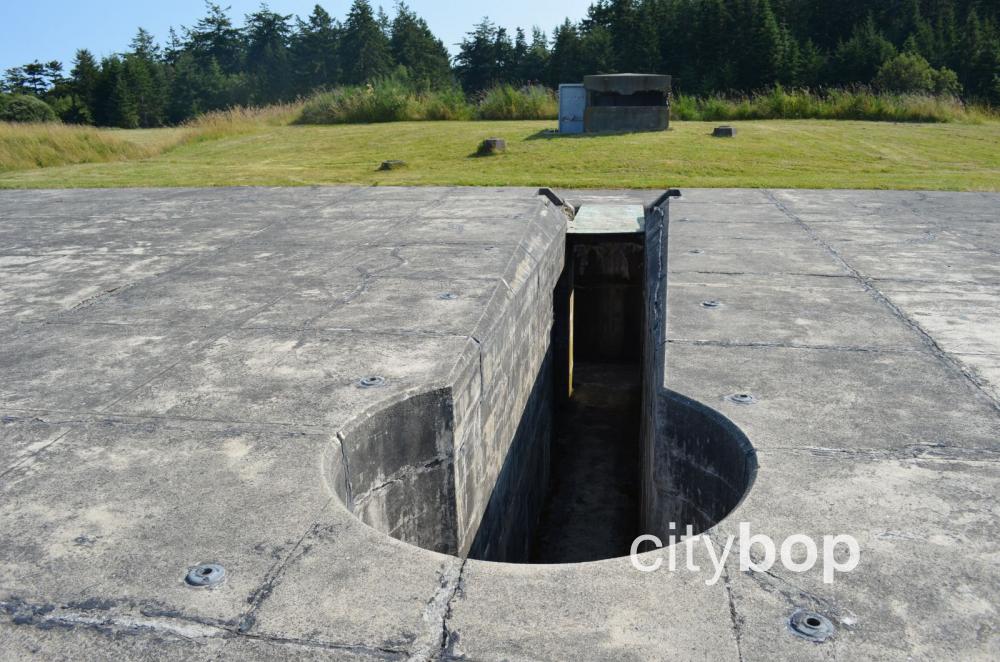 If you want to stay on Marrowstone Island you're in for a treat, because you can stay overnight in the old military buildings.  Choices include the Officers' Quarters, Engineer's House, Hospital Steward's House, Non-Commissioned Officers Quarters, and Waterway House (book here).  If you'd prefer to stay in  town, then drive to nearby Port Townsend.

Below is the non-commissioned Officers' Quarters house, great for overnight stays with larger groups.  Check out those views! 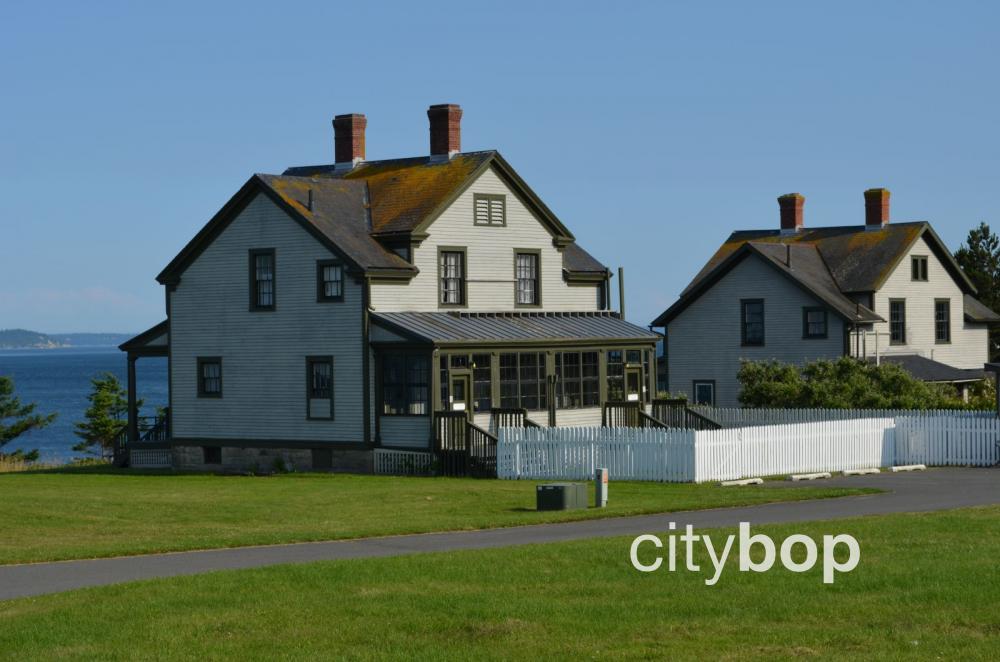 The Engineer's House below has a cute, cosy interior. 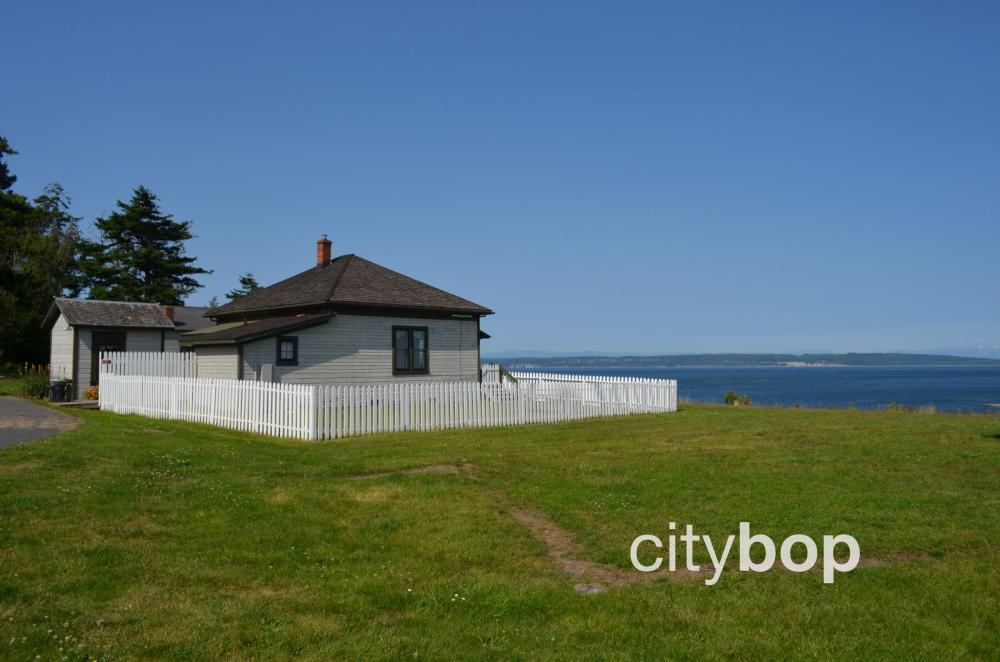 4. Go to the lower campground at Fort Flagler, for the cafe, pier, playground and picnic area.

The lower campground overlooks the beach at Kilisut Harbor, in the northwestern corner of Fort Flagler. It's a lovely scenic area perfect for a picnic, with a boating pier, playground, picnic tables and the seasonal Beachcomber Cafe with outdoor seating (1321 Flagler Campground Road).

The upper campground is up on the bluff with a more secluded location. The campgrounds have tent sites, hook-ups, restrooms and showers. Book here.

The Marrowstone Point Light Station is visible just outside of Fort Flagler State Park.  It sits on top of a square fog building on the island's northeast tip.  It's not open to the public, but visible from the beach.  The old lighthouse keeper's buildings are now occupied by The U.S. Geological Survey's Marrowstone Marine Field Station. 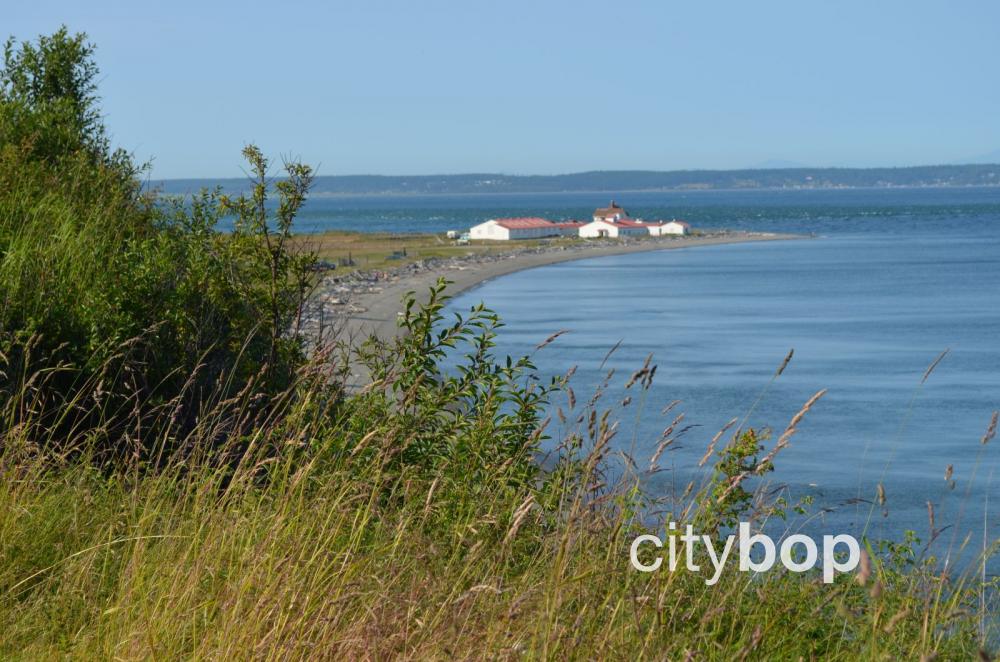 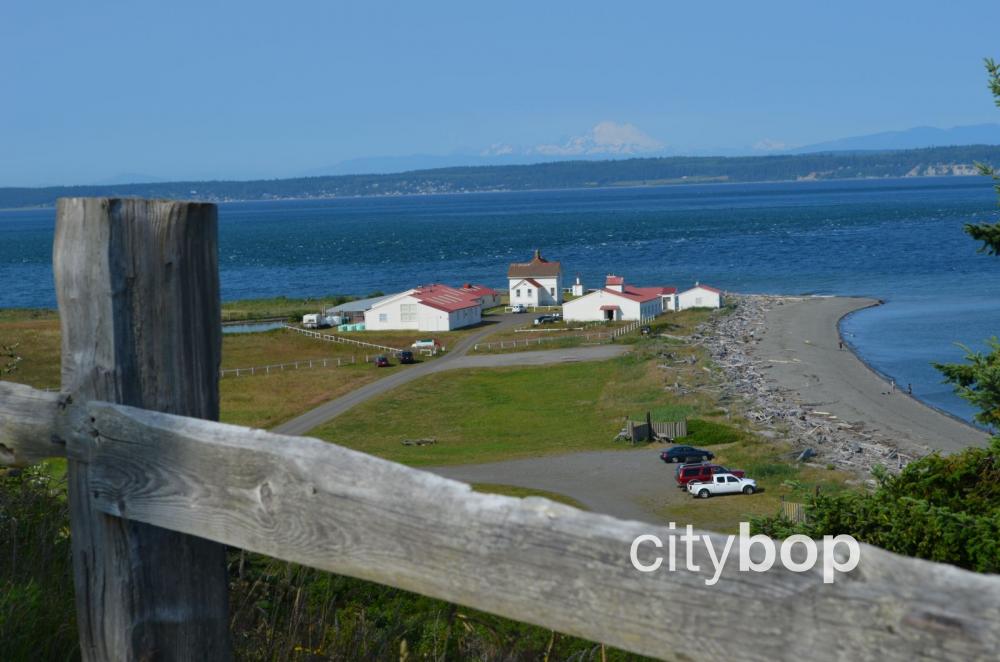 The Military Museum has a great overview of the local history of the area, and also includes a gift shop. Check times (seasonal).

7. Do a guided tour of a 19th Century Gun Emplacement.

Discover the fascinating history of this military hospital constructed in 1905 at Fort Flagler on the main parade ground (pictured on the right). Check times (seasonal).

10. Buy lunch at the General Store, then drive out to E Beach Park for a picnic.

Stock up on supplies at the Nordland General Store (7180 Flager Road, Nordland).  This charming community hub is only one of two stores on Marrowstone Island. They serve coffee, sandwiches, wine, gifts and more.  Drive 0.7 miles out to E Beach Park and enjoy lunch with glorious east facing views of Whidbey Island and Mt Baker.  There's a few picnic tables and a covered shelter near the beach.

What fun places are near Marrowstone Island?