Visit the most photogenic beach on the Washington State coastline.

Stunning Ruby Beach is on the northwest coast of Washington State, and is one of the most popular beaches in the Olympic National Park, so expect lots of visitors!

Ruby Beach has an awe inspiring setting, with surreal sets of sea-stacks in-front of mysterious Abbey Island, enormous piles of driftwood at the high tide line, and the enchanting Cedar Creek meandering towards the Pacific Ocean. Ruby Beach got its name from the patches of reddish colored sand, formed by garnet mineral crystals.

This rugged wilderness beach is easy to get to, and is directly off Highway 101, just 30 minutes southwest of Forks. Once there it's a 5 minute walk down a steep trail. The beach is unsuitable for swimming due to the perishingly cold waters.

Camping: There's no camping at Ruby Beach, but you can camp at the Kalaloch Campground near Kalaloch Lodge, the south shore of Lake Quinault (Gatton Creek, Falls Creek and Willaby Campgrounds) and the campsite at the Quileute Oceanside Resort at La Push.

10 best things to do at Ruby Beach 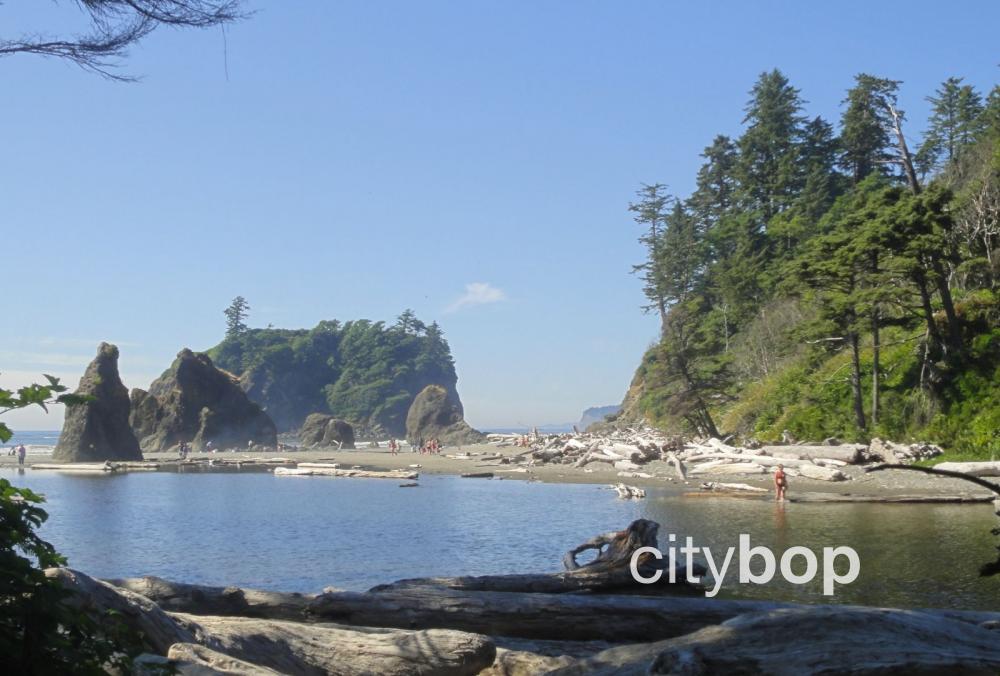 1. Take the short trail down to the beach. 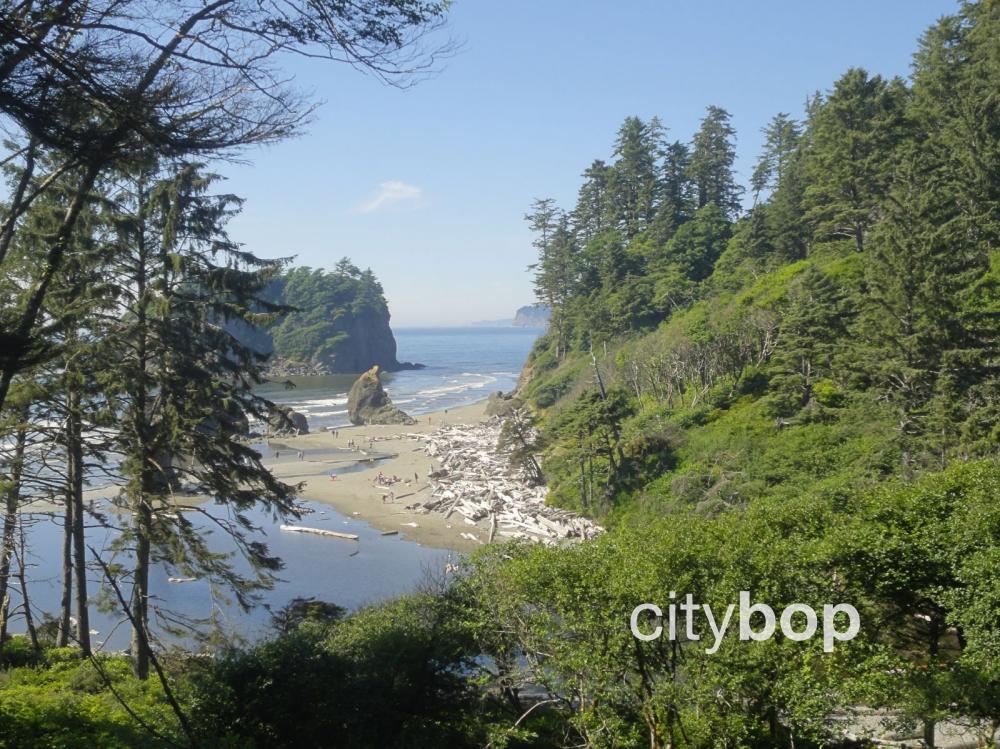 The steep trail down to the beach takes about 5 minutes. Some of the best pictures are from the ridge at the top of the trail. 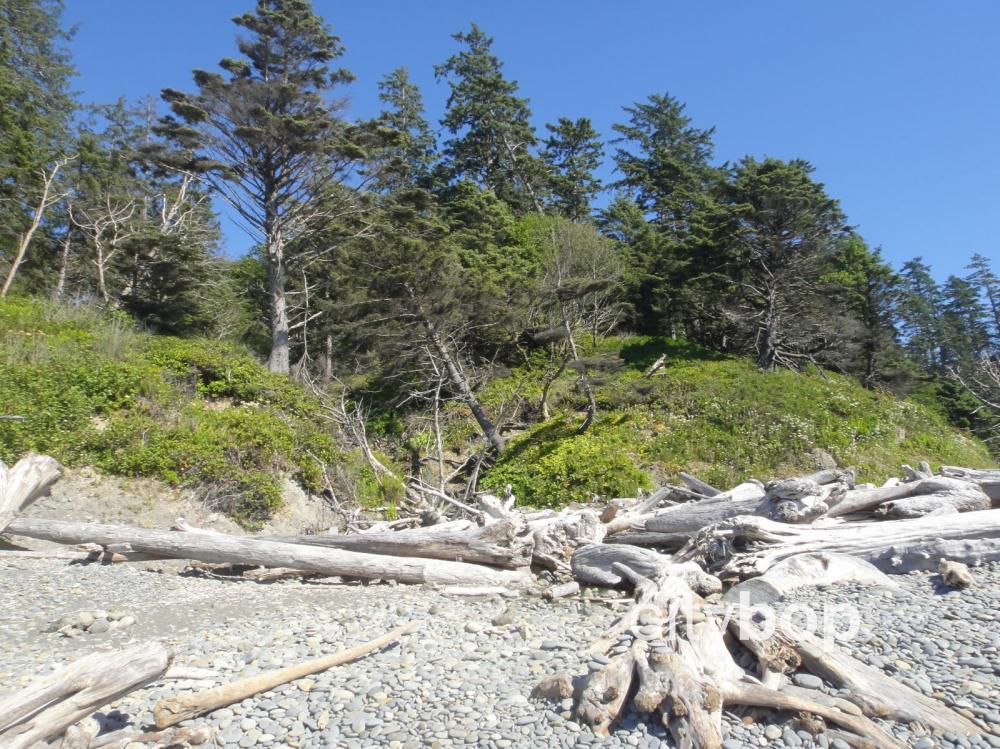 When you reach the bottom of the trail, you'll need to step over piles of driftwood to get to the beach. The beach is also very pebbly, so wear sturdy shoes. These piles of driftwood are characteristic of wild, northwestern beaches.

2. Check out the tidepools around the sea stacks at low tide. 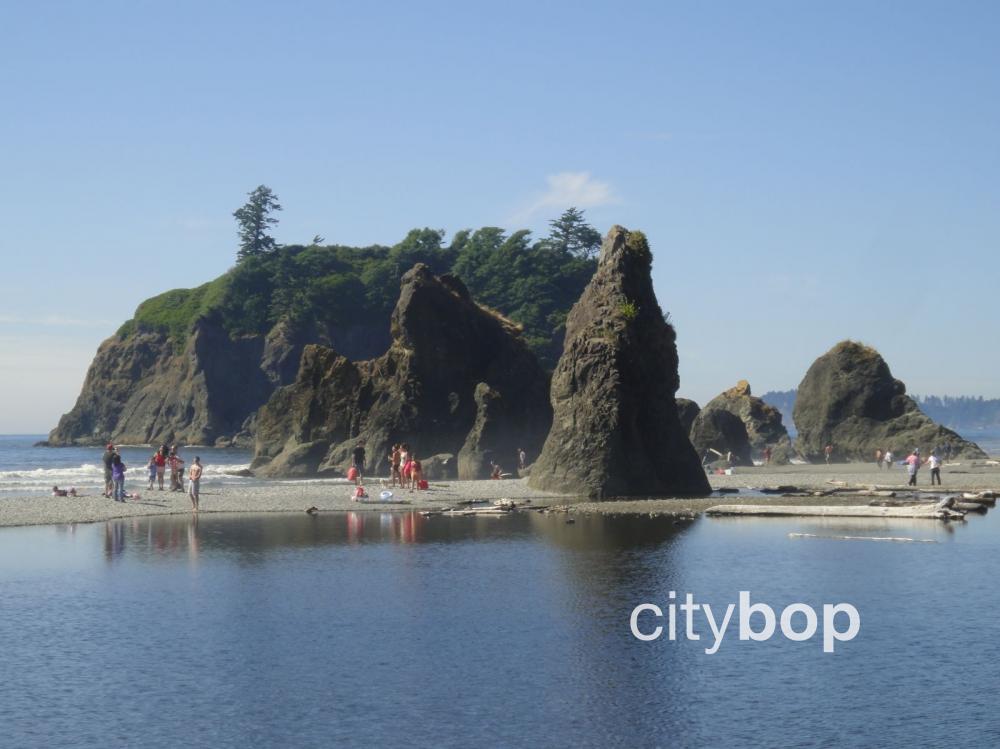 The most remarkable feature of Ruby Beach is the unusual set of angular sea stacks close to the shore.  These rocks are also a protected refuge for colonies of birds, such as tufted puffins and common murres.  Wait for low tide to explore the tidepools full of starfish, crabs and sea anemones around the seastacks. This unusual seastack is halfway up Ruby Beach, and has an interior hollowed out by the elements. 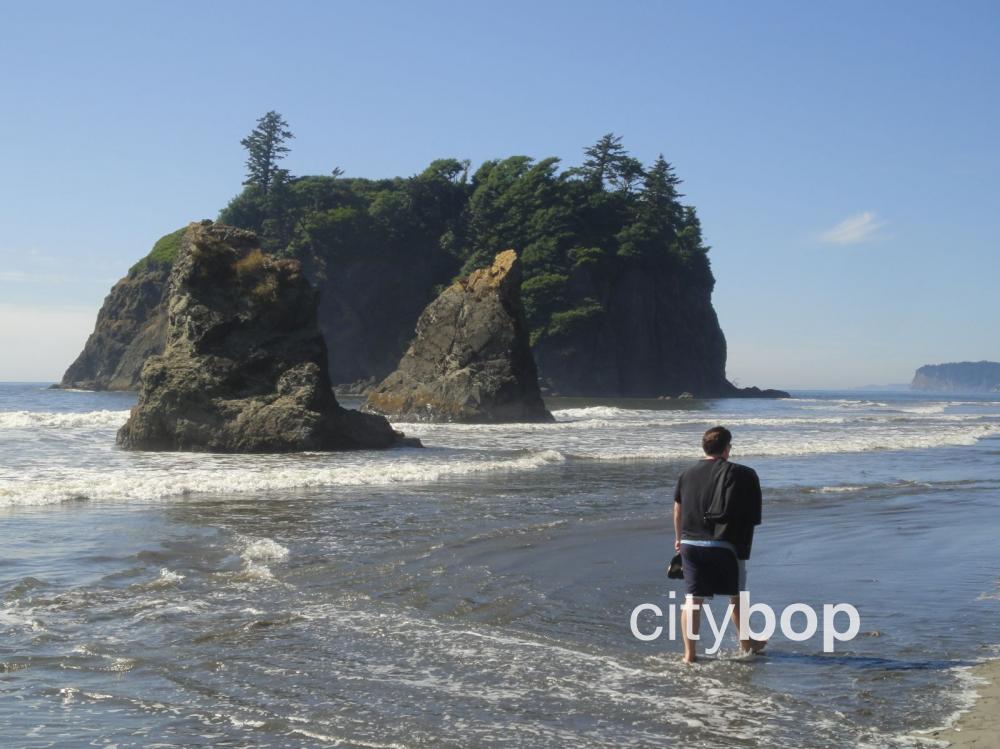 Abbey Island dominates Ruby Beach, and earned its name due to its cathedral-like appearance. Conifers cling precipitously to the edges of the island's sheer cliffs, formed mostly from volcanic rock.

4. Stroll along the arc shaped beach. 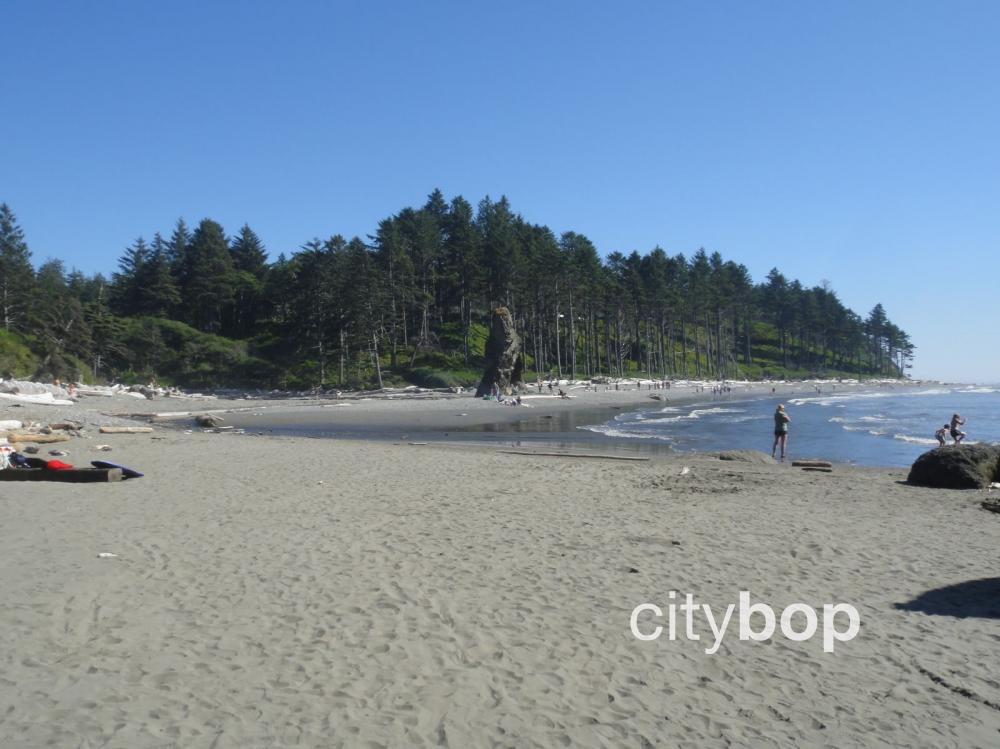 Take a walk along the sandy shoreline of Ruby Beach, approximately 0.7 miles long.

5. Look out at the Destruction Island Lighthouse

The eerie Destruction Island Lighthouse is visible off the coastline, 4-miles southwest of Ruby Beach. It sits on a 30-acre island that is now part of the Quillayute Needles National Wildlife Refuge, and not open to the public. There was once a vibrant community out on the island, with four lighthouse keepers, and even a schoolhouse!

The lighthouse stands 94-feet tall, and was first lit in 1891 to prevent shipwrecks off its rocky shoreline.  It was later automated in 1968, then fully decommissioned in 2008.

The island is named after two massacres that took place in the 1700s when European explorers sent parties out to explore the mainland. Crews from both a Spanish ship (1775) and later an English ship (1787) were both massacred by Indians.

6. Take a closer look at the river. 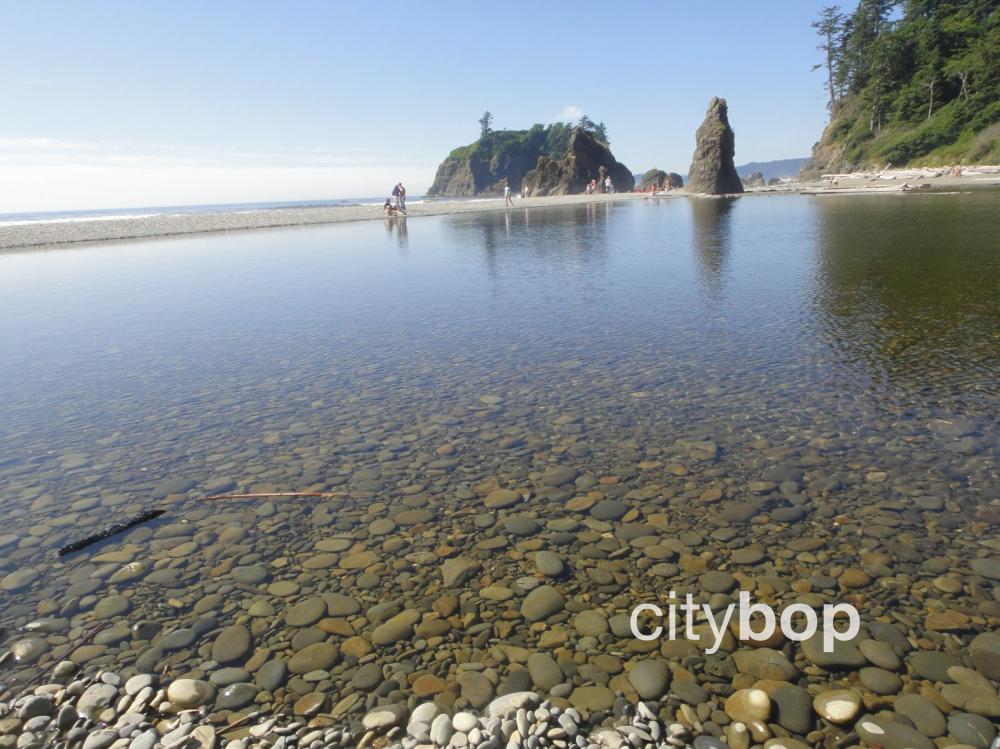 Cedar Creek is popular with visitors, and some choose to swim or wade in its waters during summer.  However, this isn't recommended due to the absence of lifeguards, and the chilly temperature of the water.  Keep an eye out for river otters foraging for food.  There's also a variety of other wildlife in this area like bald eagles, kingfishers, and harbor seals. 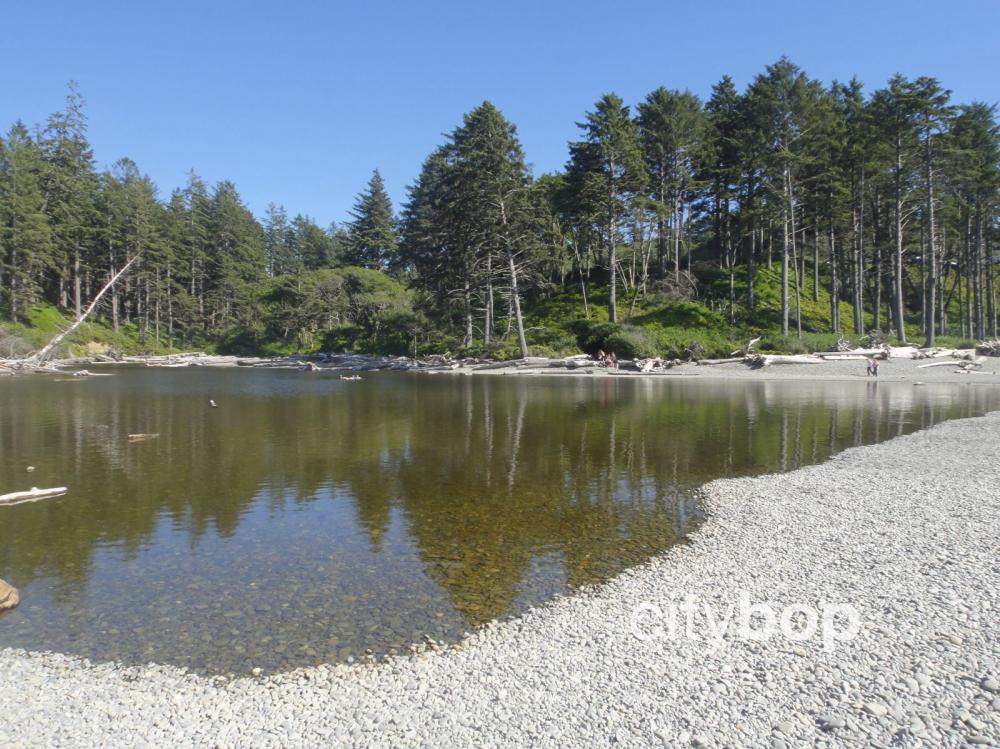 7. Make some sandcastles on Ruby Beach. 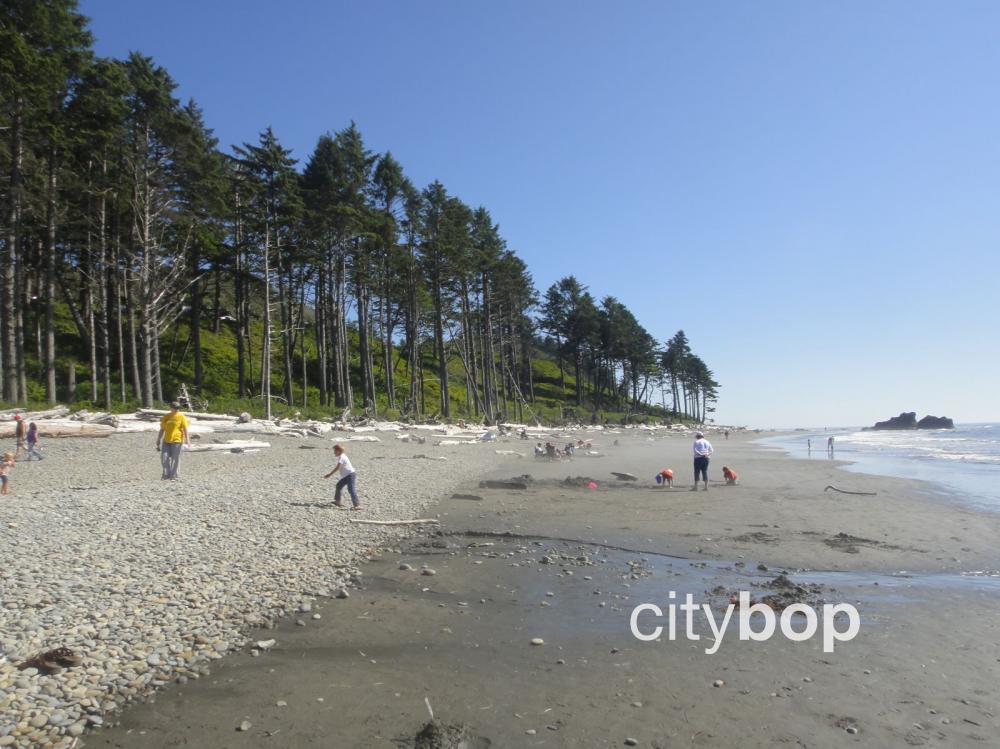 In the warmer summer months, the sandy shoreline of Ruby Beach is perfect for making sandcastles.  Don't forget to take a bucket and spade! 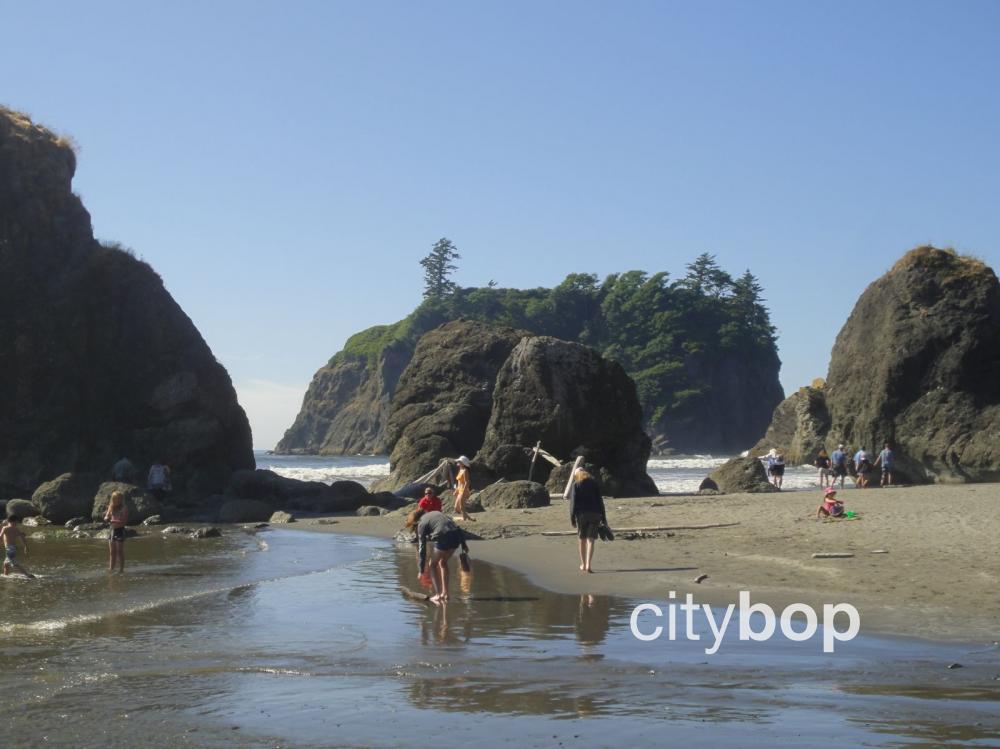 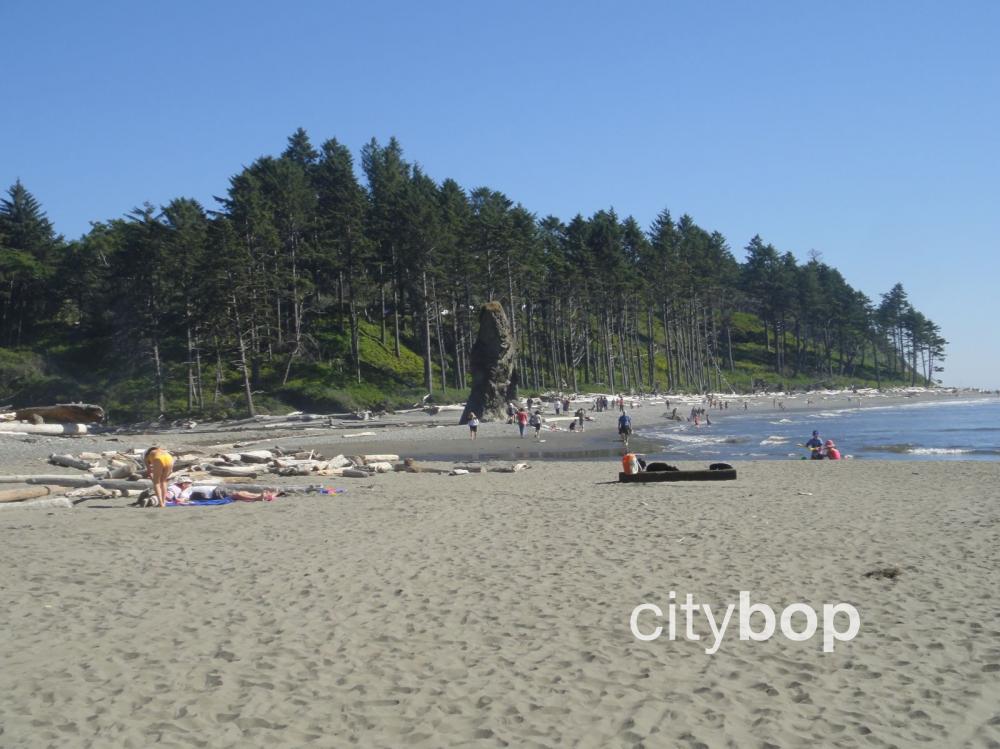 Some visitors prefer to sunbathe on Ruby Beach during the short window for warm weather. Outside of the summer months this is a stormy beach with turbulent wave action.

9. Hike along the beach up to the Hoh River. 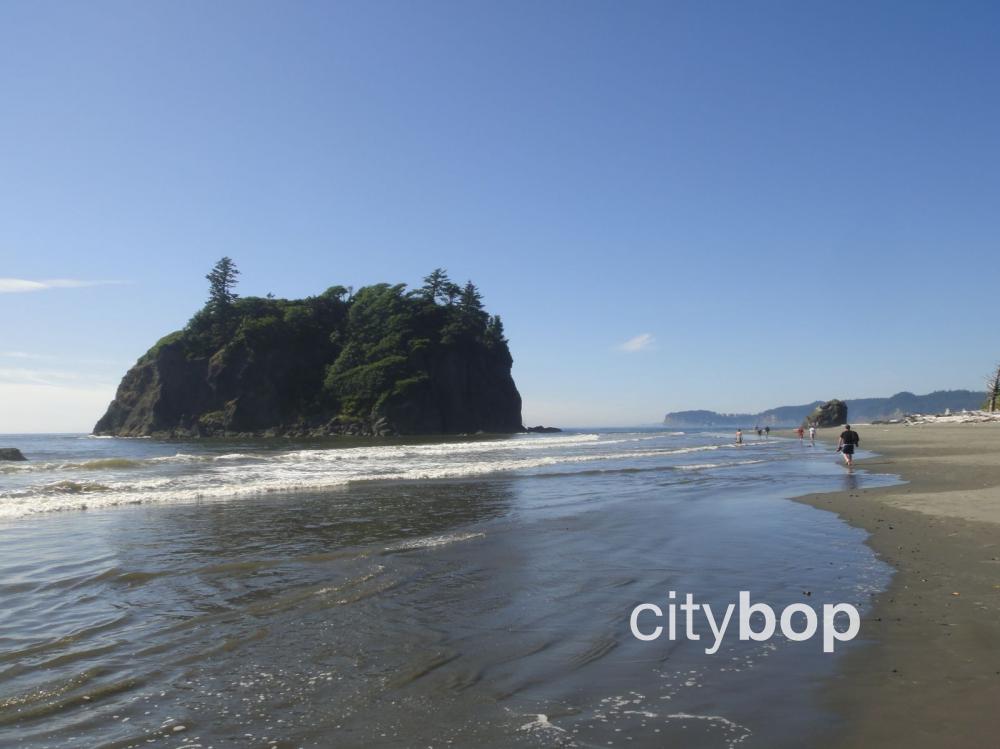 If you'd like to stretch your legs, hike 2-miles north from Ruby Beach to the mouth of the Hoh River.  Always check tide tables, and make sure the tide is out.

Combine a visit to Ruby Beach with a drive around the Olympic National Park, and explore other popular beaches including Kalaloch Beach and Second Beach at La Push.  Attractions near Ruby Beach include: