Fort Mason is a gem, easily overlooked by tourists because it's tucked away on a quiet promontory situated between Fisherman's Wharf and Crissy Field.

The blufftop section of Fort Mason has a Great Meadow with breathtaking views of the Golden Gate Bridge. There's also a collection of historic military buildings, and youth hostel with a public cafe.

The waterfront section down the hill at Fort Mason, is home to the Fort Mason Arts Center, and has an eclectic range of restaurants, cafes and galleries.

10 best things to do at Fort Mason 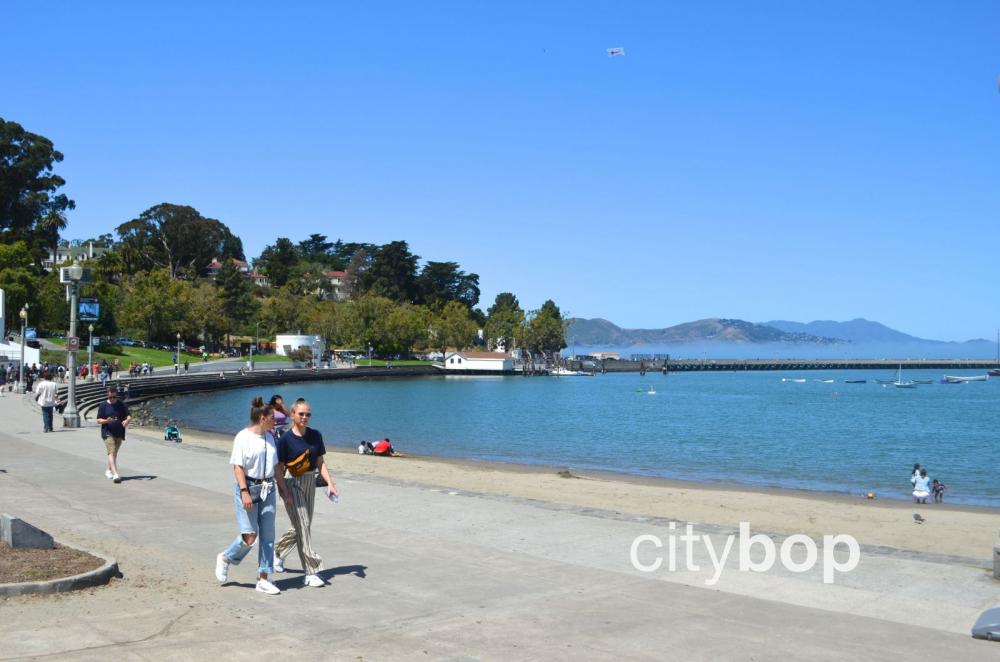 Walk up the steep path that starts at the Aquatic Park Pier at Fisherman's Wharf, and ascends to the hilltop at Fort Mason. 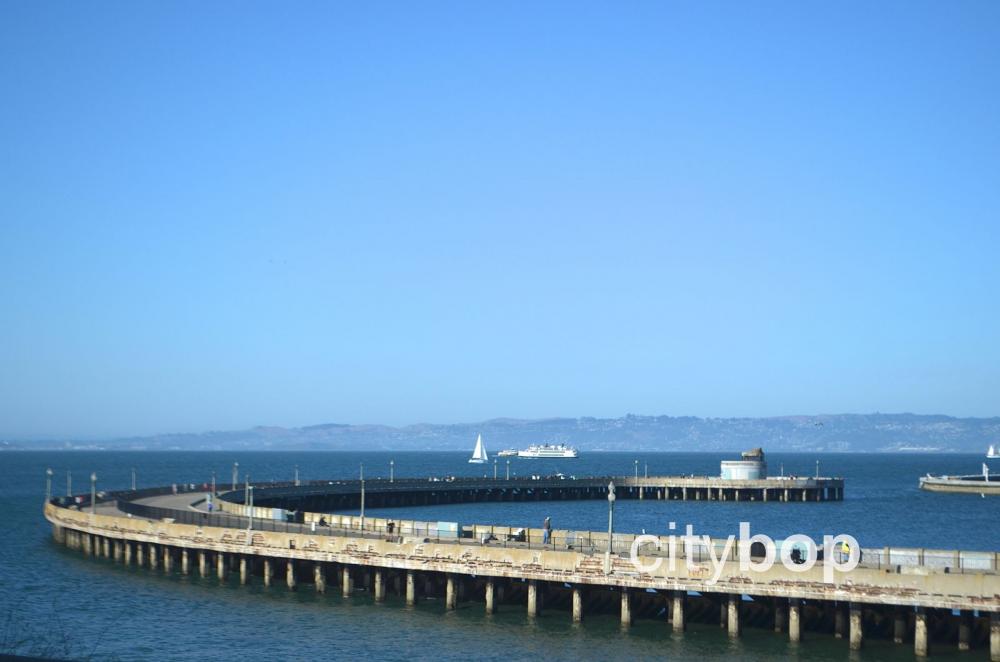 Along the way, you can also venture out to the end of the 1,400 foot Aquatic Park Pier, and enjoy magnificent views of the San Francisco skyline and Marin Headlands.

2. Relax on the lawns at the Great Meadow at Fort Mason. 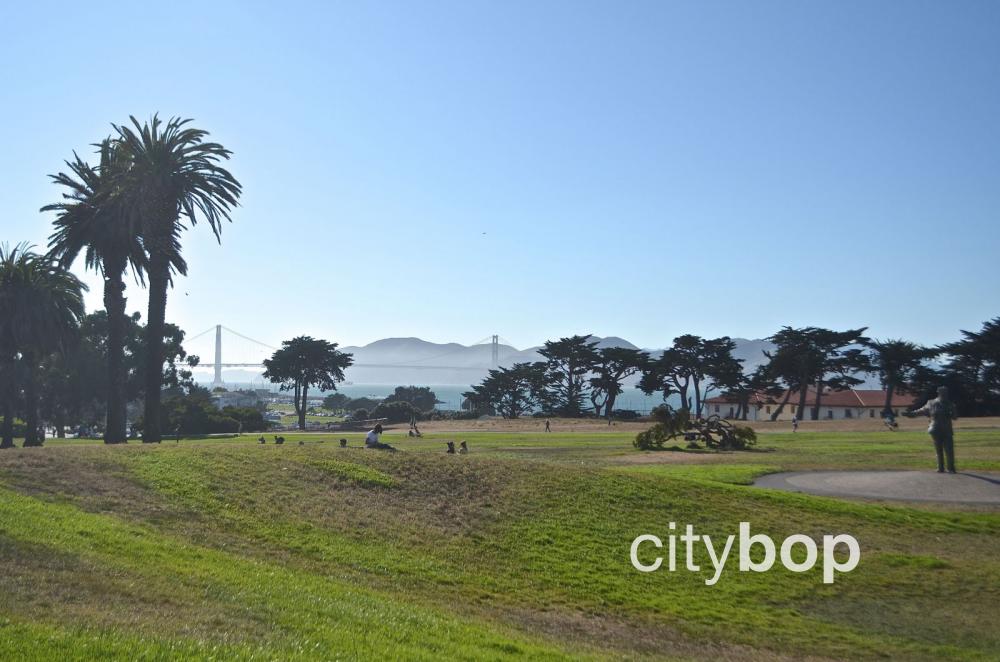 The Great Meadow is at the top of Fort Mason's hill. Bring a picnic, read a book, throw a frisbee, and enjoy the stunning views of the Golden Gate Bridge from this cool vantage point. 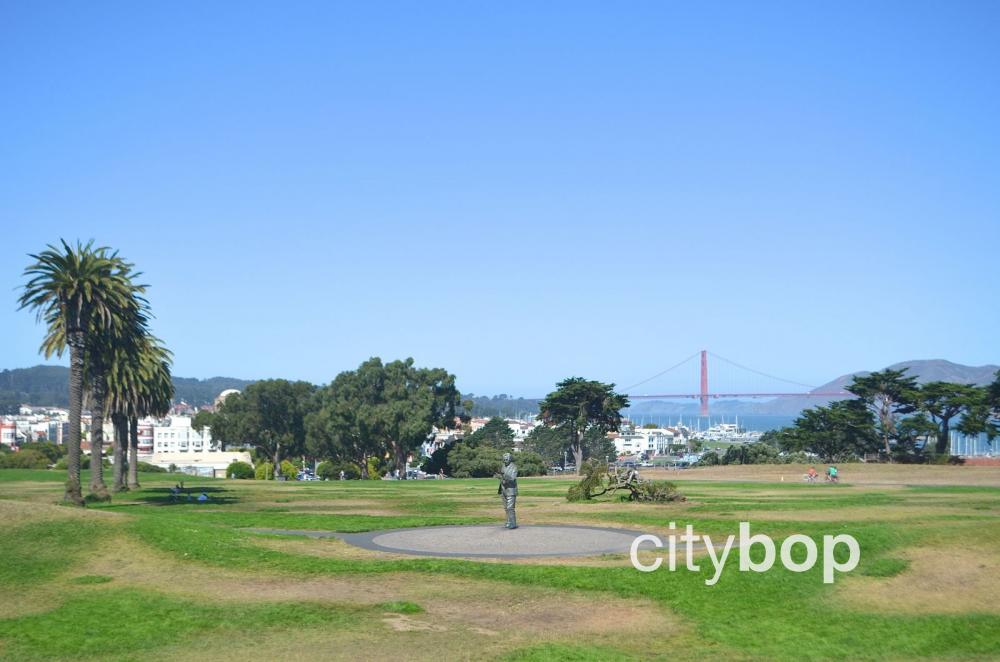 3. See the statue of the man who saved Fort Mason from development. 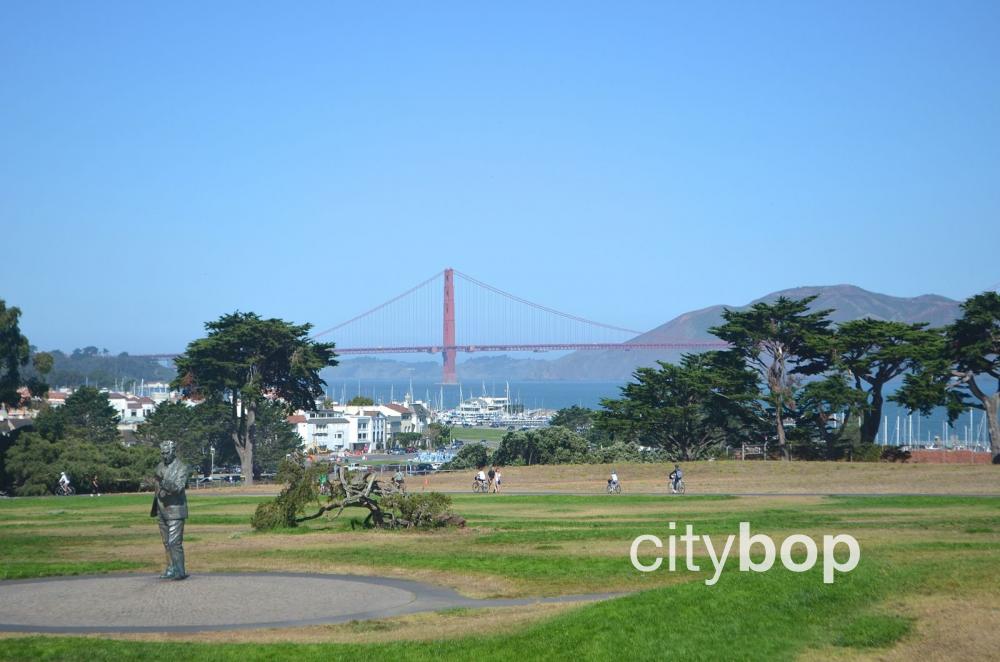 You can't miss the prominent statue of San Francisco congressman Phillip Burton at the Great Meadow at Fort Mason.  Phillip Burton was the driving force behind the creation of the Golden Gate National Recreation Area, and a giant in the conservation movement of the 1960s and 1970s.

He was a charismatic and determined leader, pushing the U.S. Army for favorable boundary line agreements for the Golden Gate National Recreation Area, created from Army land in 1972. The Golden Gate National Recreation Area is composed of 82,027 acres of former Army land, including some of the most scenic parts of the Bay Area; like Fort Mason, Fort Baker, the Marin Headlands, the Muir Woods National Monument, Stinson Beach and more.

San Francisco has a lot to thank Phillip Burton for, ensuring future generations can enjoy these public lands.

4. Grab a coffee at the hostel's cafe. 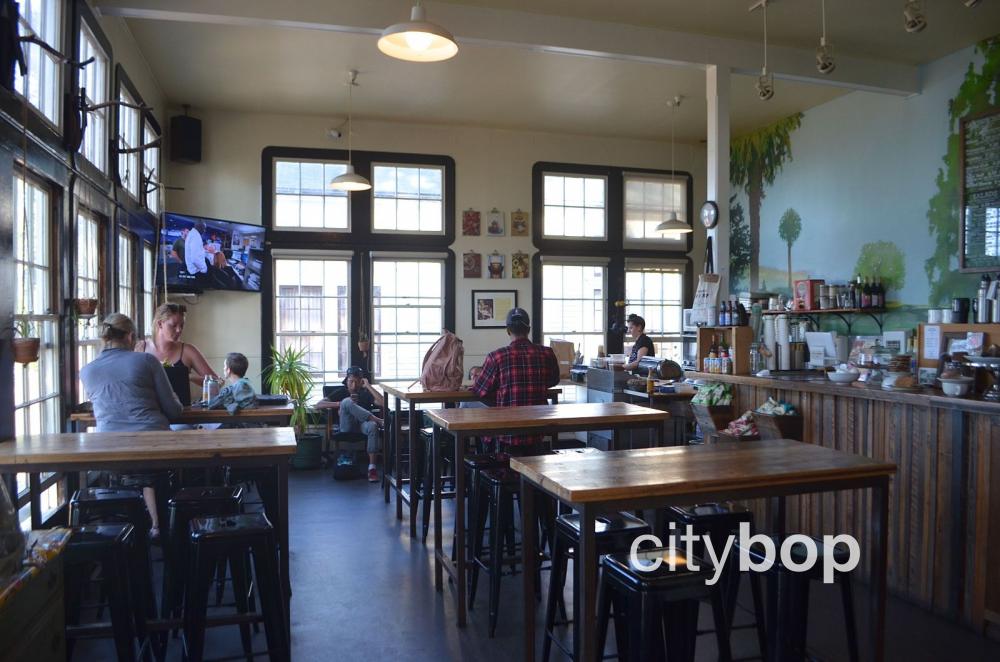 As you approach the top of the hill at Fort Mason, you'll see the San Francisco Fisherman's Wharf Hostel. The cafe serves breakfast, lunch and dinner, and has great water views.  You don't have to be staying at the hostel to use the cafe. 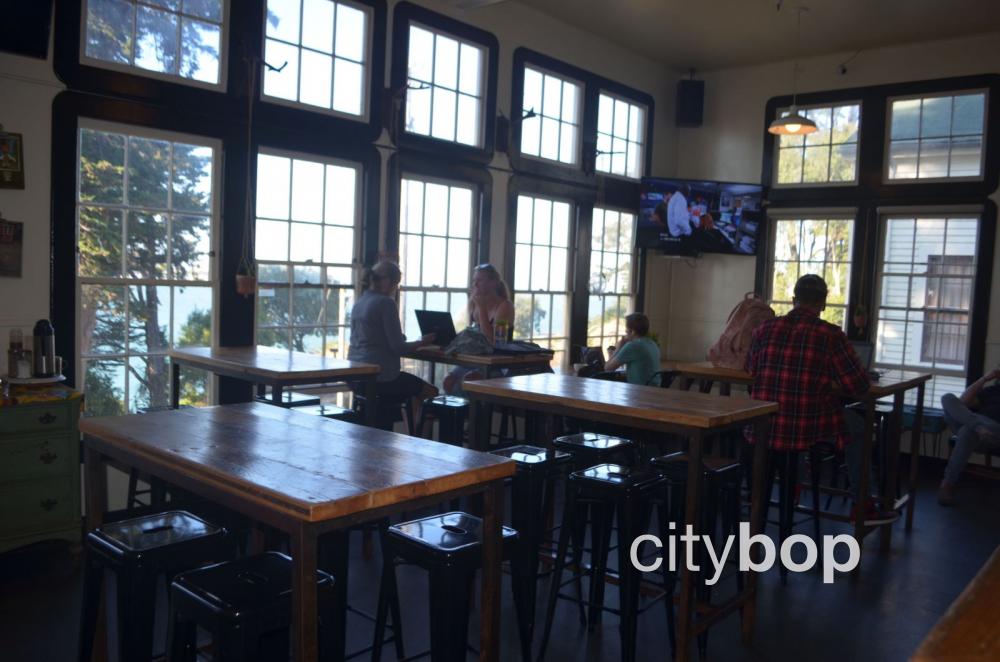 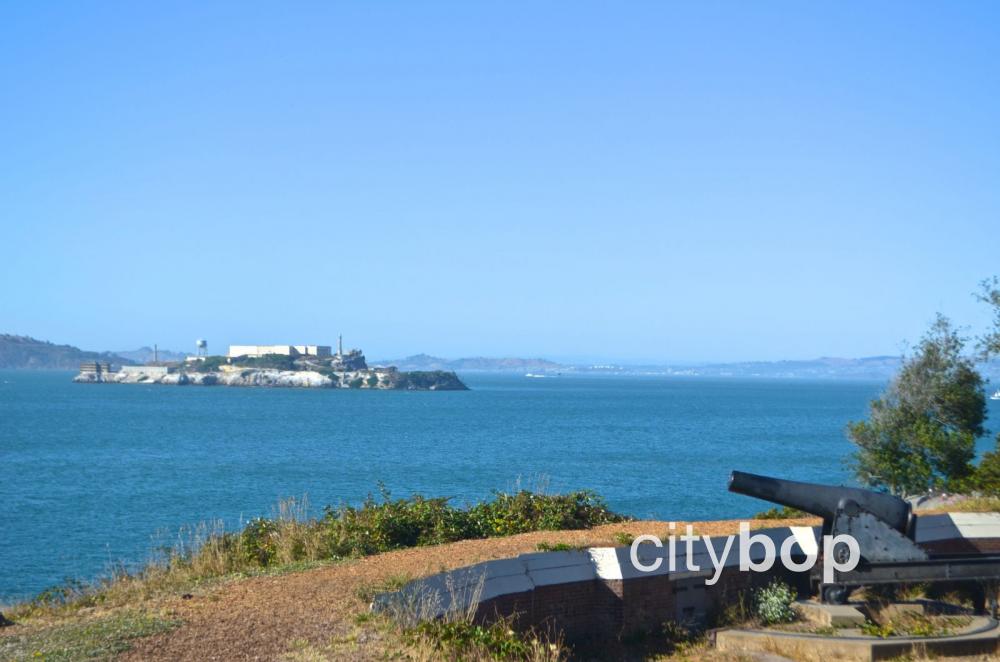 There are two civil-war era military batteries at Fort Mason north of the hostel, constructed in 1864 to protect San Francisco against invasion by Confederate forces or foreign enemies.

You can find the West Battery (pictured above), a short distance below the hostel.  It was buried under dirt and undergrowth for decades, until it was excavated in the 1980s. Cannon balls could be fired at an incredible 2.5 mile distance at enemy ships. The batteries created a triangle of fire around the Bay Entrance, that also included defenses at Alcatraz Island, and Fort Point at Crissy Field. 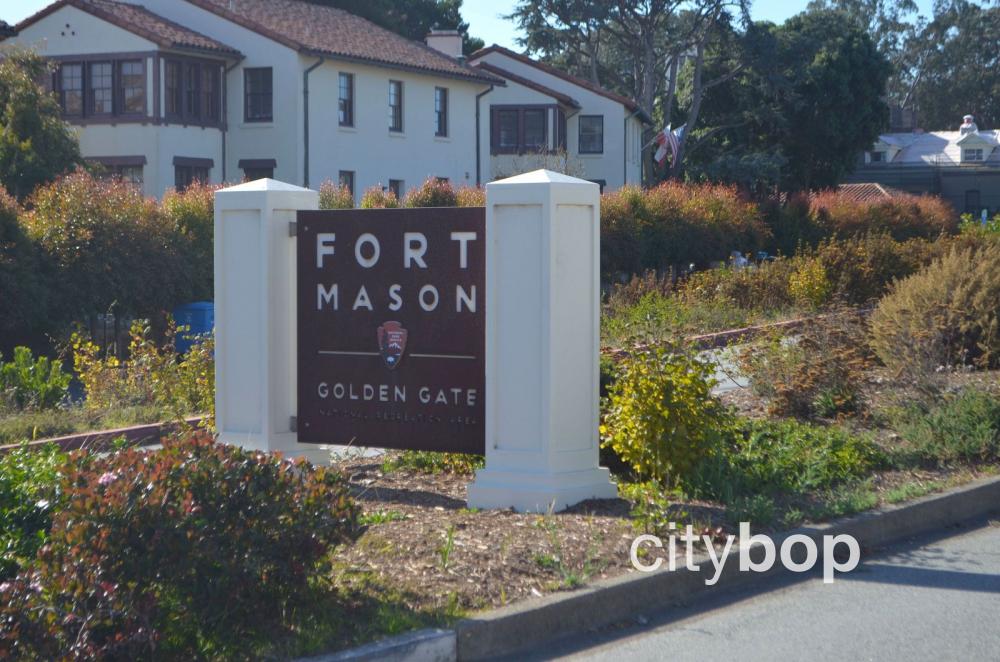 It's also fun to walk past the dozens of the military buildings around Fort Mason, many now available for rent.

7.  Learn about Fort Mason's fascinating history, dating back to Spanish rule in 1797. 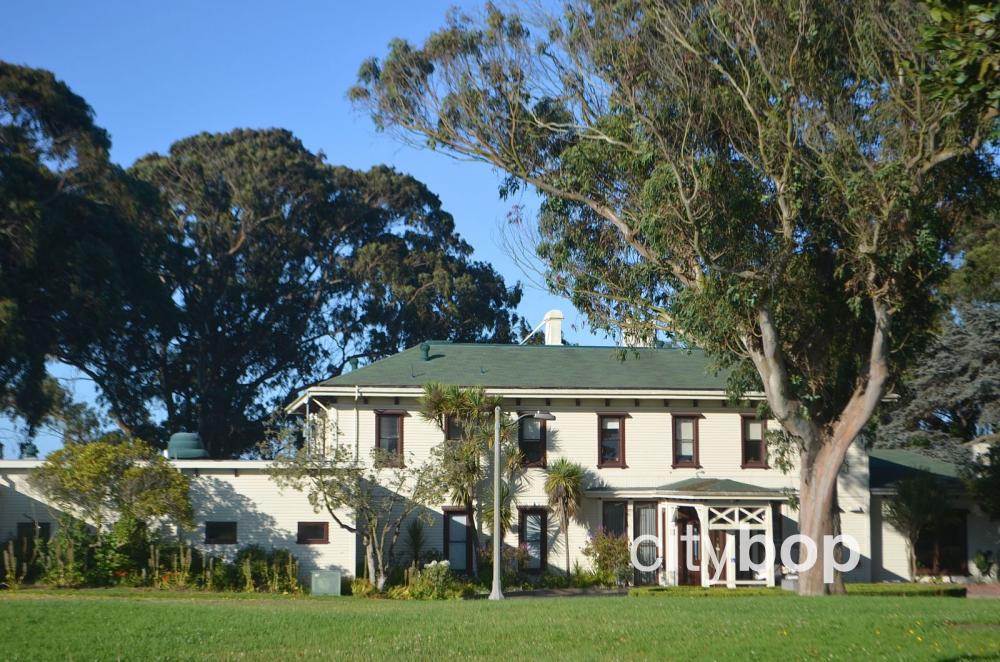 McDowell Hall was originally known as Brooks House, built in 1855 by a private developer.

It was one of the five houses commandeered by the U.S. Army, and became the Commanding Officer's Residence, occupied by every major general of the Army's Western Headquarters from 1877 to 1943. It was named after General McDowell, the first general to occupy the premises. McDowell Hall then served as the social center for the U.S. Army, with a ballroom, lounge, dining room and library.  After the 1906 earthquake, Brigadier General Funston immediately established a command center at McDowell Hall to assist the city's police force, and set up a refugee camp for displaced citizens.

Today it's used as an events venue.  You can't beat the gorgeous views of the Aquatic Park and San Francisco Bay from the rear lawn, perfect for weddings.

9.  Explore restaurants, cafes and galleries at the Fort Mason Arts Center on the waterfront.

Between 1915 to WWII, the lower section of Fort Mason was a major logistics and transportation hub, known as the San Francisco Port of Embarkation. Over 1.6 million military personnel passed through here during WWII, and these old warehouses and piers are now part of the Fort Mason Arts Center.

10. Continue 2 miles along the gorgeous waterfront path between Fort Mason and Crissy Field. 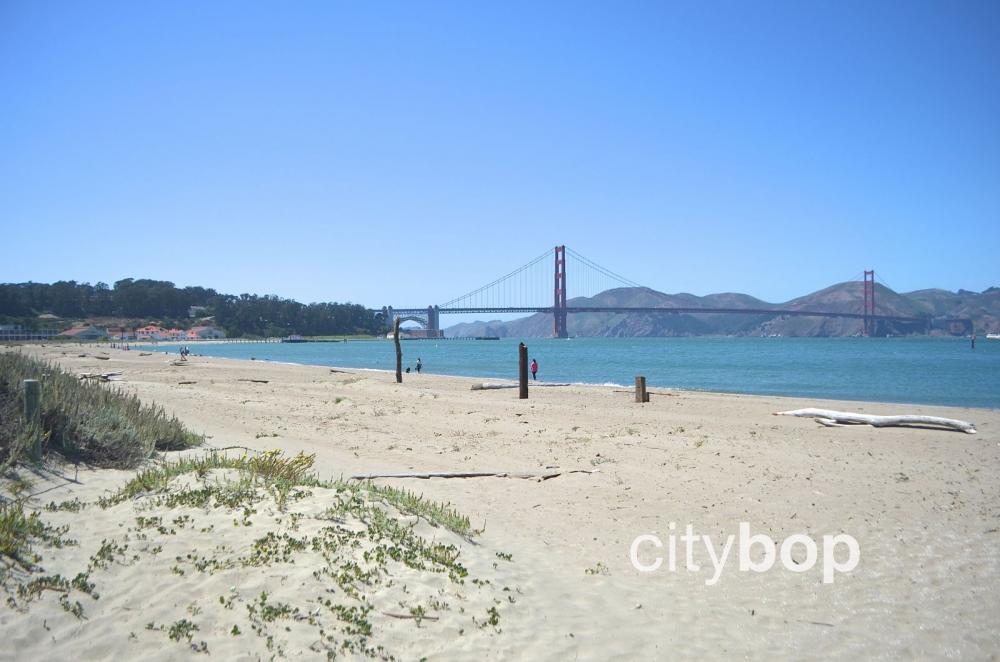 This wide, flat path is along Marina Boulevard in San Francisco's Marina District, and is designed for both pedestrians and cyclists. It connects Fort Mason to popular attractions at Crissy Field, like East Beach, Fort Point and the Warming Hut Cafe.  It also passes the magnificent Palace of Fine Arts built for the 1915 World Fair.