Historic Angels Flight is known as the world's shortest railway.

Angels Flight is a funicular railway that connects downtown L.A. to attractions on Bunker Hill, and is known as the world's shortest railway.

Two trains travel 298 feet up and down Bunker Hill, between stations on Hill Street and California Plaza.

Tickets can be purchased at either end of the railway, at the bottom station (351 South Hill Street, LA 90013), or the top station (California Plaza on Grand Avenue, Los Angeles, CA 90071).

There's also a free stairway if you'd prefer to walk, but the steps can get pretty exhausting!

The original Angels Flight railway opened in 1901, one block north of today's location, and transported passengers from downtown L.A., to their stunning Victorian homes at the top of Bunker Hill.

1. Angels Flight has two trains, Sinai and Olivet, running in opposite directions.

2. The trains travel 298 feet up and down Bunker Hill on a shared cable.

3. The railway has been featured in numerous films and TV shows.

5. There's a lot of attractions walkable from the Angels Flight railway.  These include The Last Bookstore, Grand Central Market, the Museum of Contemporary Art, The Broad, Walt Disney Concert Hall, and Grand Park. 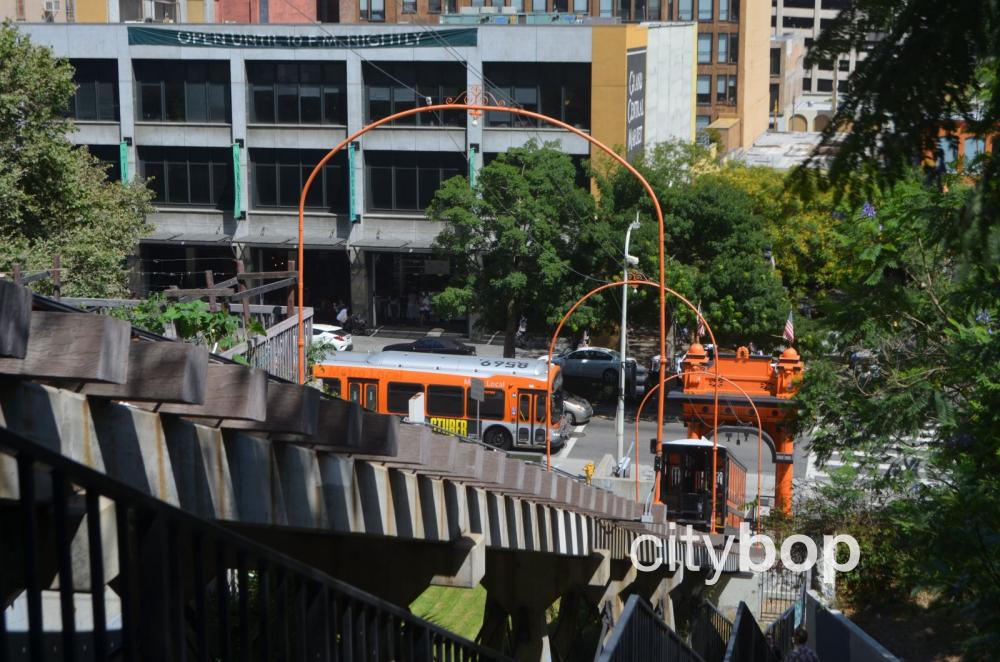 Attractions near the top station, at Angels Flight

Attractions near the bottom station, at Angels Flight

Why was Angels Flight constructed?

The Angels Flight railway opened in 1901, one block north of today's location, transporting passengers from downtown LA, to stunning Victorian homes owned by affluent citizens at the top of Bunker Hill.  These grand homes were constructed in the late 1800's, and included some architectural masterpieces like the Bradbury Mansion.

However, by the 1920's these beautiful mansions fell into disrepair, as their owners relocated to new neighborhoods like Pasadena.  The mansions were soon converted to cheap boarding houses, and rented out to working class tenants.  Bunker Hill subsequently became rife with crime and over-crowding.

A travesty then occurred when every Victorian home on Bunker Hill was razed to the ground in the 1960s to make way for modern, commercial buildings.  It's topography was also permanently altered when the hill was flattened, and over 20,000 working class citizens were displaced.

In 1996 it re-opened in its second location a block south.  However a fatal accident in 2001 again closed down the railway when a passenger died.

Take a train to downtown LA to see Angels Flight

Both the Red Line and Expo Line travel to downtown LA, and are a cheap way to travel.

The Red Line travels from Hollywood to downtown's Pershing Square station.  This station is 0.2 miles from Angels Flight.

The Expo Line travels from Santa Monica to downtown's 7th Street/Metro Center station.  This station is 0.6 miles from Angels Flight.