The free Getty Museum is an architectural masterpiece, just off the 405 highway in Brentwood L.A.

The Getty Museum is the wealthiest art museum in the world, and has a breathtaking hilltop setting with views over L.A.  It opened in 1997, designed by award winning architect Richard Meier.

It's free to enter the Getty Museum, but there is a parking fee. Check opening hours here.

When oil magnate J. Paul Getty died in 1976 he left an astounding $700 million to the J. Paul Getty Trust, and today's endowment has now grown to an estimated $6.5 billion.  J. Paul Getty was an avid art collector, and many of the pieces are from his personal collection. The highlights of the collection are Irises by Vincent Van Gough (1889), and original furniture from the Palace of Versailles.

10 best things to do at the Getty Museum

1. Take a fun tram ride up the hill to the Arrival Plaza.

Drive to the lower parking lot of the Getty Museum, just off the 405 highway, then walk to the Tram Departure Plaza and take a thrilling 5-minute tram ride to the top of the hill.  It's exhilarating to reach the Arrival Plaza and see the awe-inspiring architecture of the Getty Museum.

2. Walk up the sweeping staircase to the Entrance Hall. 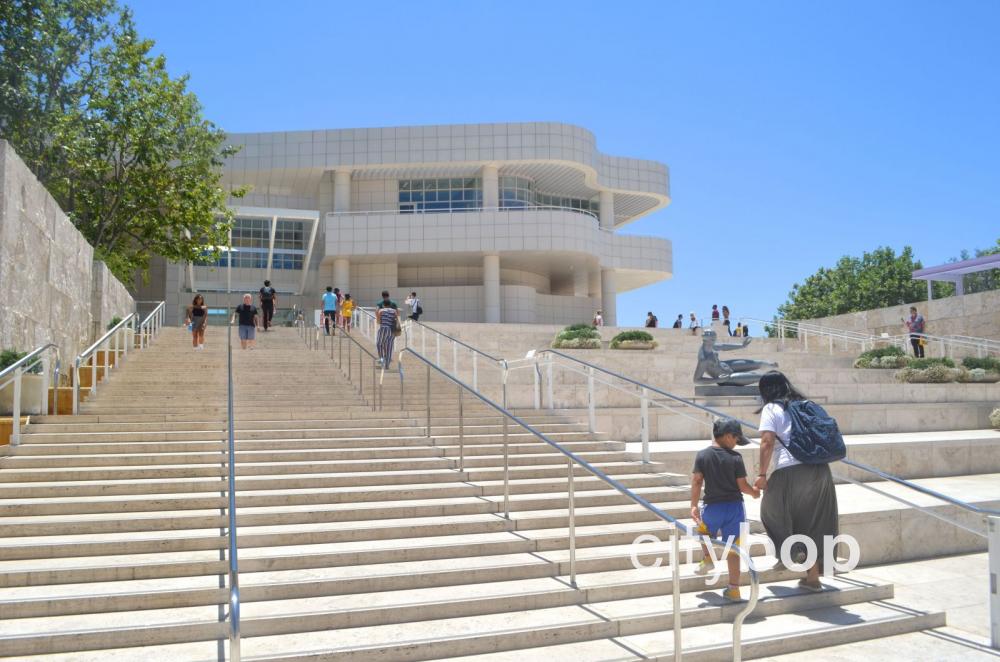 A sweeping staircase leads from the Arrival Plaza to the Museum's Entrance Hall. 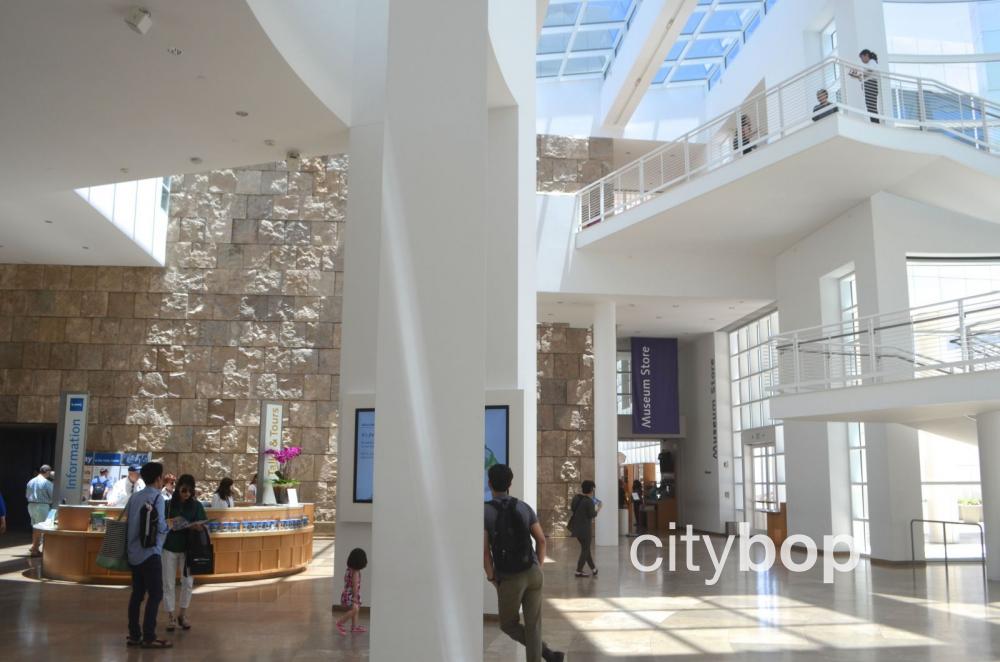 Pick up a map at the information desk at the Entrance Hall, and watch a 10-minute introductory video at the theater, or visit the Museum Store.

3. Admire the water features at the stunning Central Courtyard. 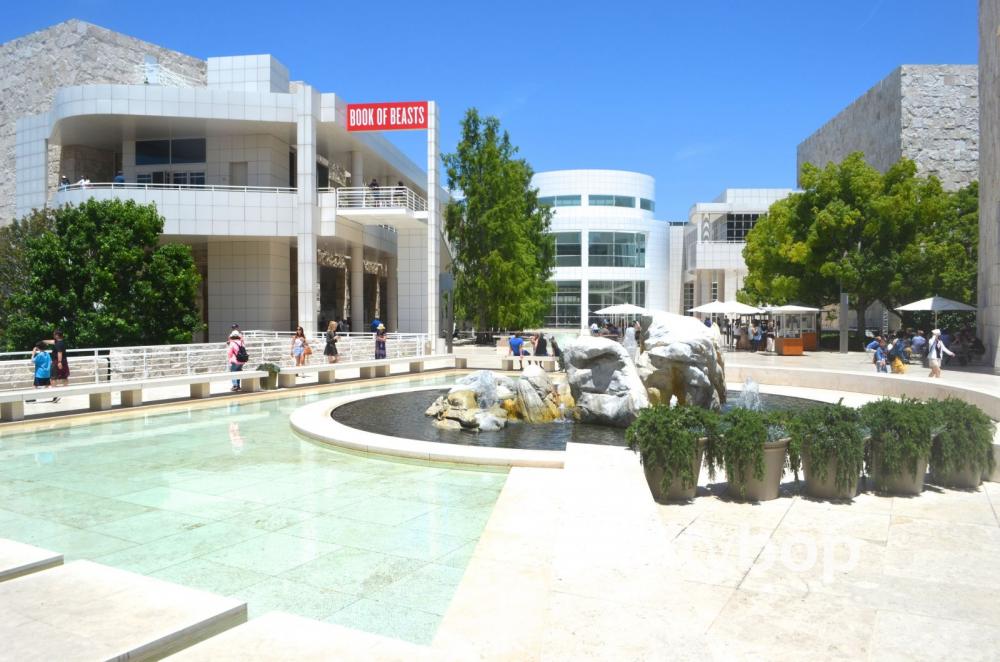 Walk outside to the magnificent courtyard at the Getty Museum.  The courtyard is surrounded by five buildings holding precious artworks.  Can you see the blue veined boulders in the middle of this fountain? 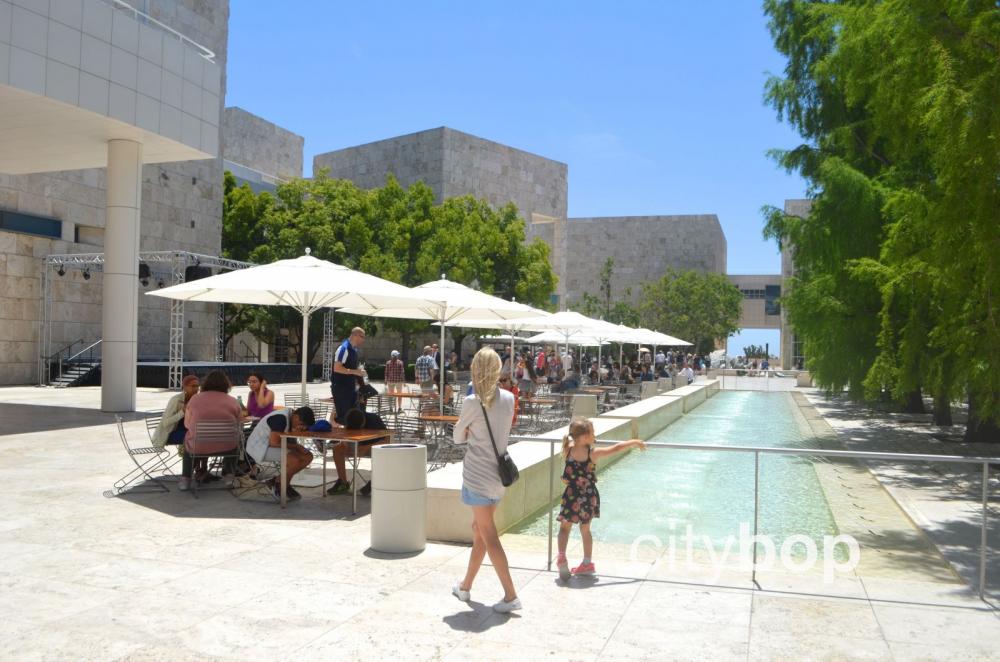 The courtyard also has an 120-foot long fountain with jets, flanked by Mexican Cypress trees on the right. 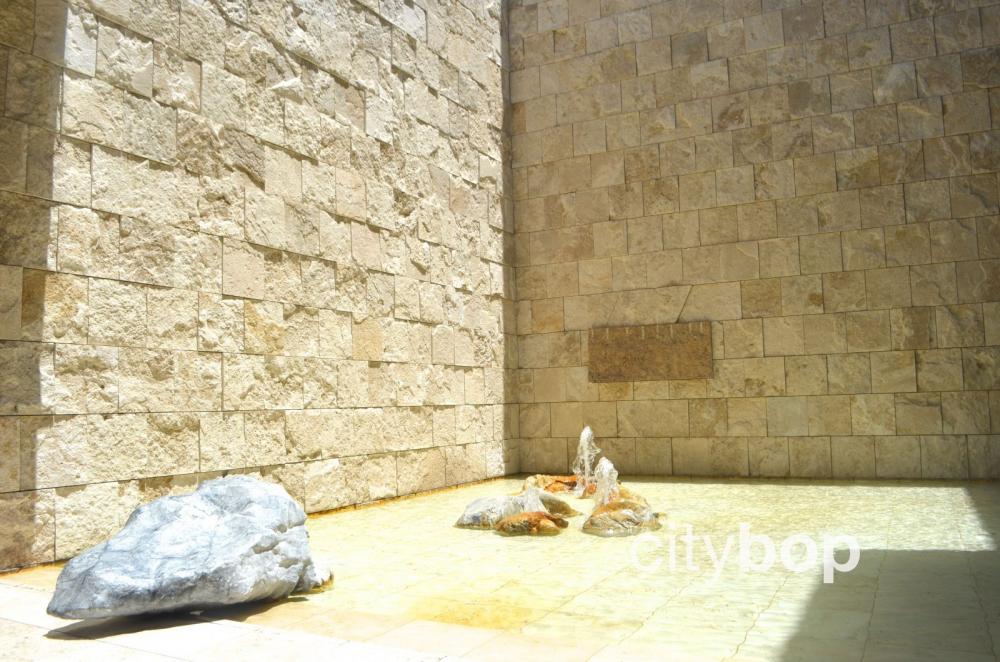 The Getty Museum's buildings are constructed from Italian travertine sourced from the Bagni di Tivoli quarry 15 miles east of Rome, and all the walls have 30-inch squares.

4. Walk down to the beautiful Central Garden at the Getty Museum. 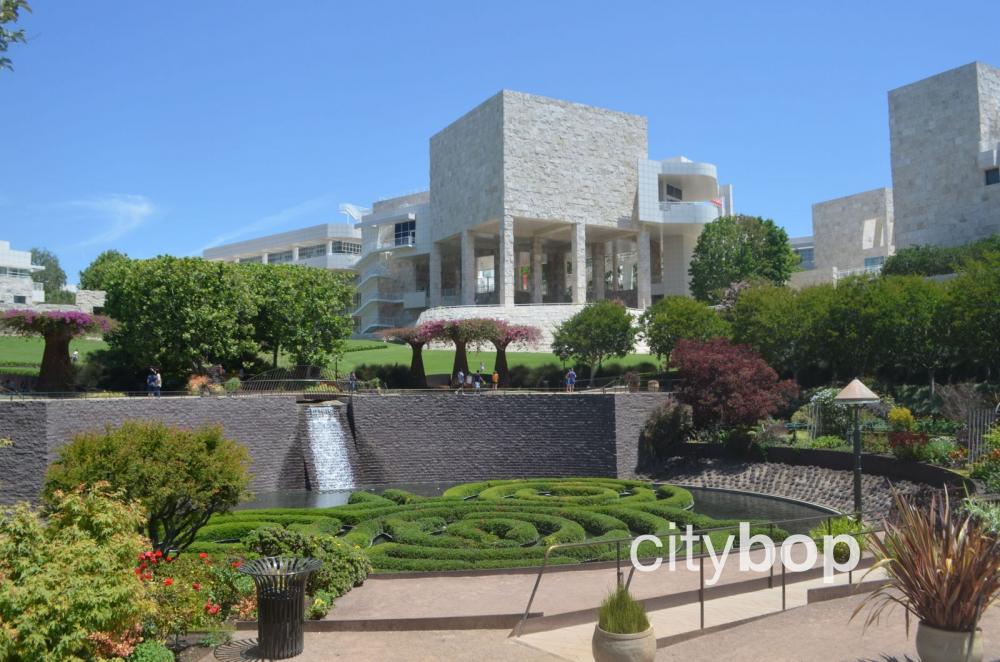 A set of stairs leads down from the Central Courtyard to the Central Garden (pictured), designed by Californian artist Robert Irwin. A stream meanders down the hill, then cascades over a stone wall into a pool with an azalea maze.  Follow the winding path all the way down to the pool and take in the fragrant azaleas. 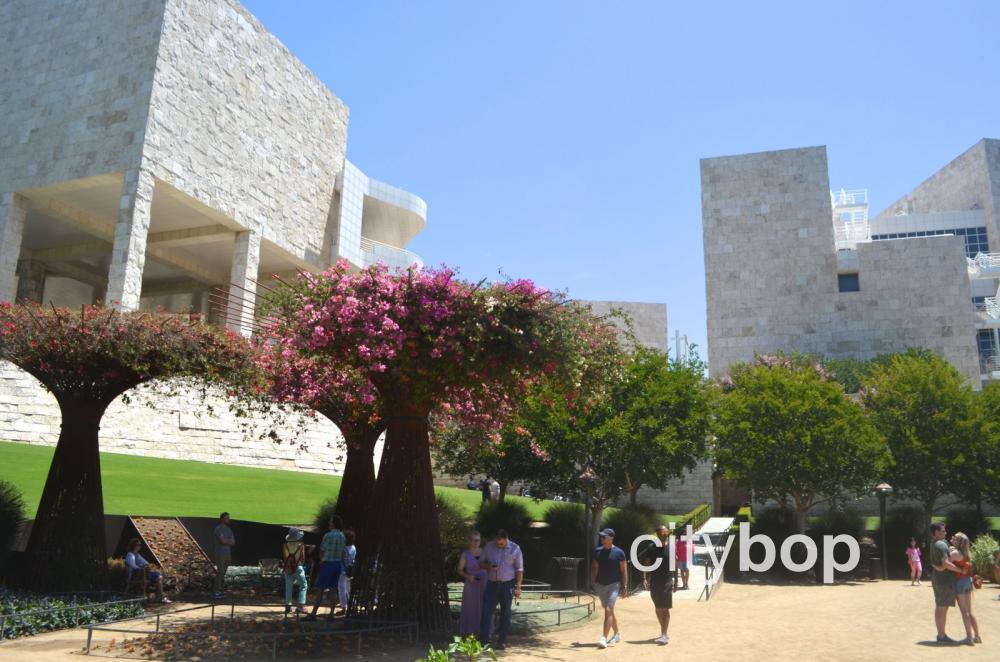 Look at these beautiful bougainvillea tower trees at the Getty Museum. 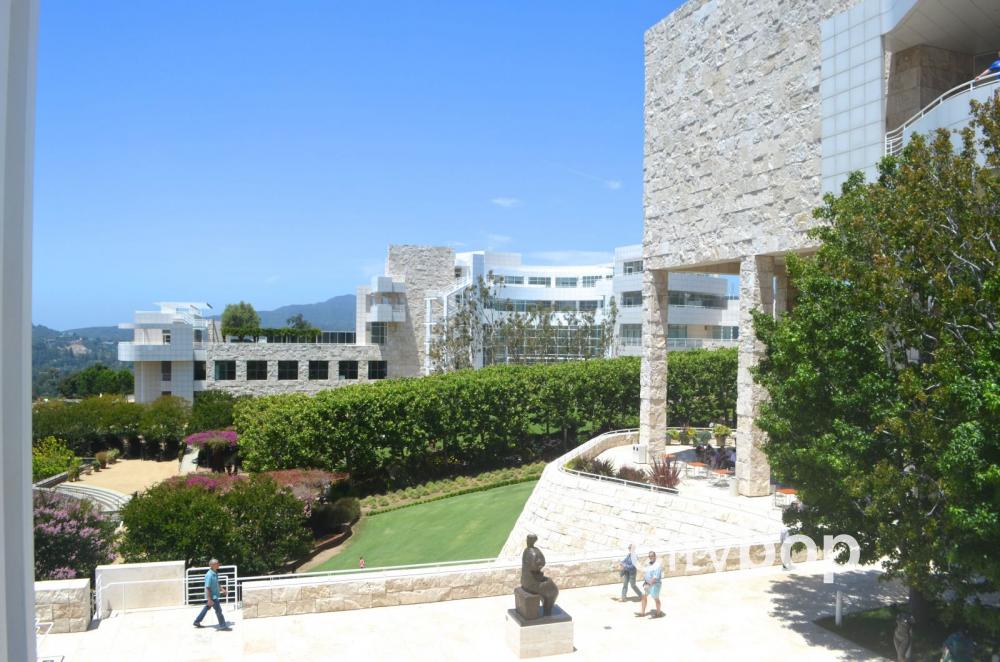 The Garden Terrace Cafe overlooks the Central Garden and bougainvillea towers, with the Research Institute buildings in the distance. 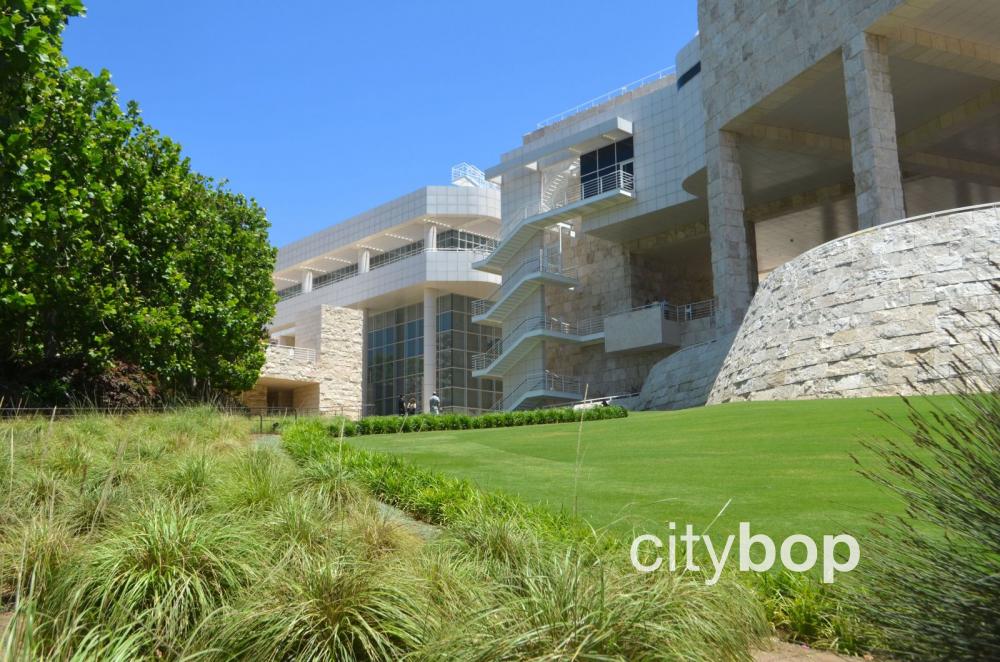 The Getty Museum is an interesting combination of linear and curved buildings, with dramatic porticos and terraces. 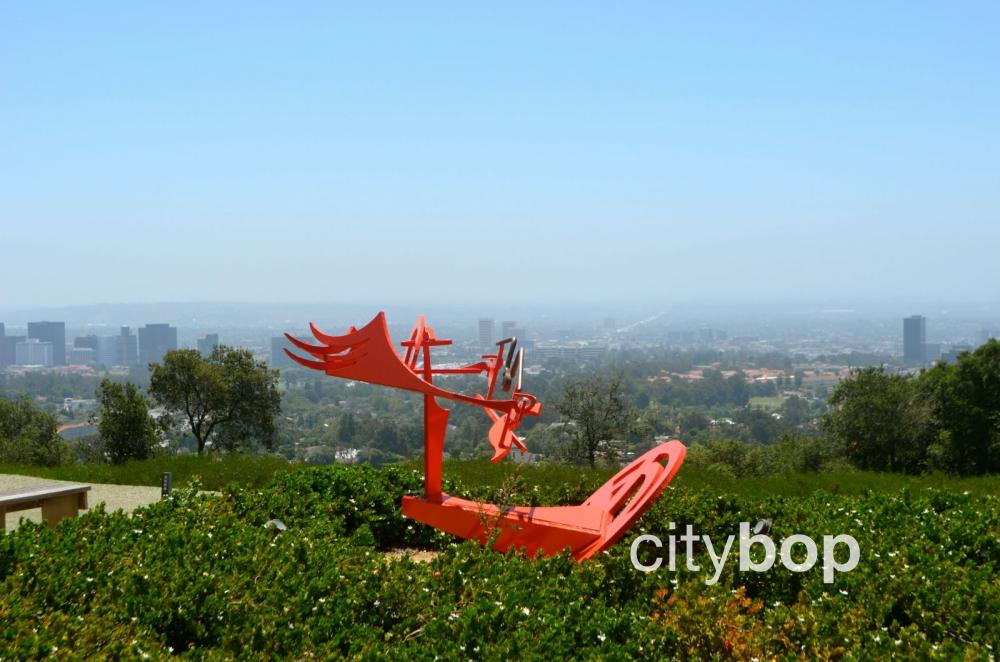 Continue the path to the Lower Terrace Garden to see six contemporary sculptures.  The most fascinating sculpture is the red Gandydancer's Dream by Mark di Suvero (1987-88).

5. Take in incredible views across the Cactus Garden.

The Cactus Garden can be viewed from a terrace south of the Central Courtyard at the Getty Museum.  The terrace has panoramic views of Los Angeles towards the ocean.

The Fran and Ray Stark Sculpture Garden is at the Tram Departure Plaza for the Getty Museum at the base of the hill, and features many British works.  The most striking is the 14-foot Bronze Form by Henry Moore (1985).

8. See original furniture from the Palace of Versailles.

The photography collection spans the early beginnings of photography in 1830s Europe, to contemporary works like Pearblossom Highway by Hockney (1986).

The Getty Museum has drawings from the 15th to 19th centuries.  Don't miss the Portrait of Joseph Roulin by Vincent Van Gogh (1888).

Is the Getty Museum good for kids?

Kids will love the tram ride up the hill!   From here you can visit the free Family Room in the East Pavilion with five small play areas (check times).  The excellent Children's Shop in the West Pavilion has puzzles and unique toys.  Children will also love wandering the gardens and courtyards, and experiencing the fantastic views. 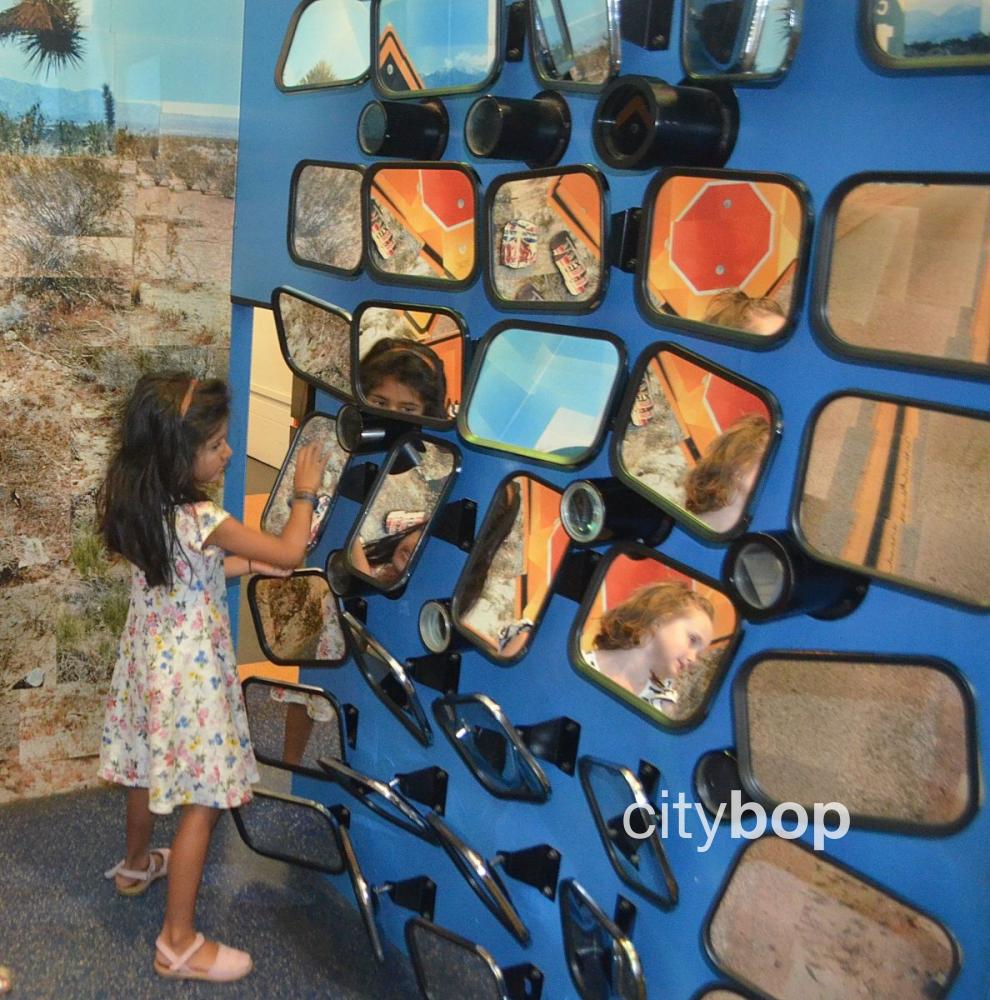 Which is the Getty Museum's most expensive painting?

In 1987 Australian businessman Alan Bond purchased Irises by Vincent Van Gogh (1889) for $53.9 million.  It was then sold to the Getty Museum three years later for an undisclosed amount.

Food at The Getty Museum 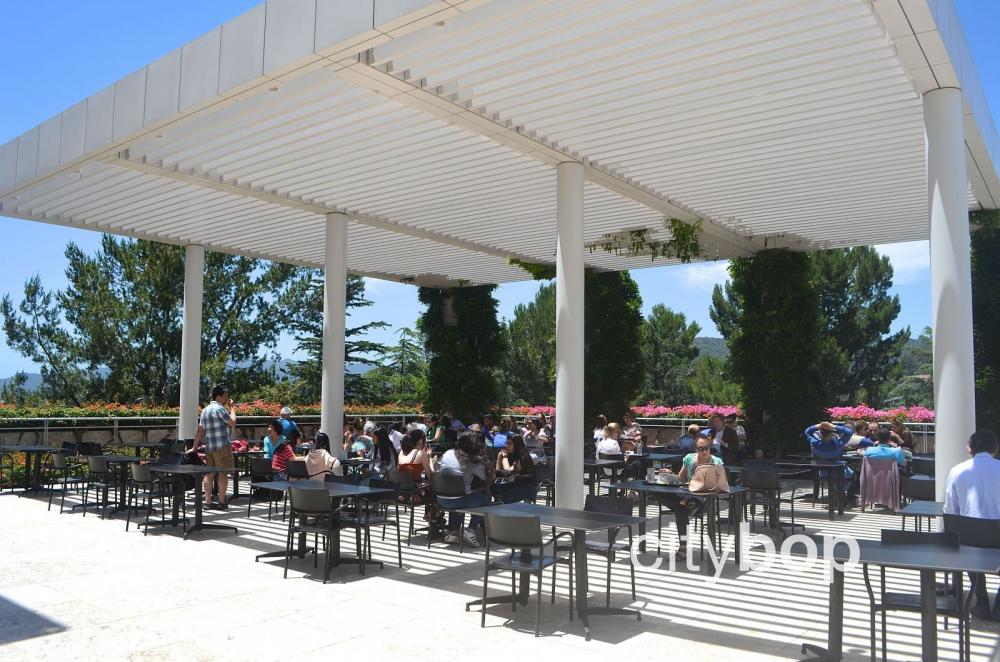 Here's a lovely outdoor patio area at the Getty Museum. There are two casual cafes, one upscale restaurant, and coffee carts.​ 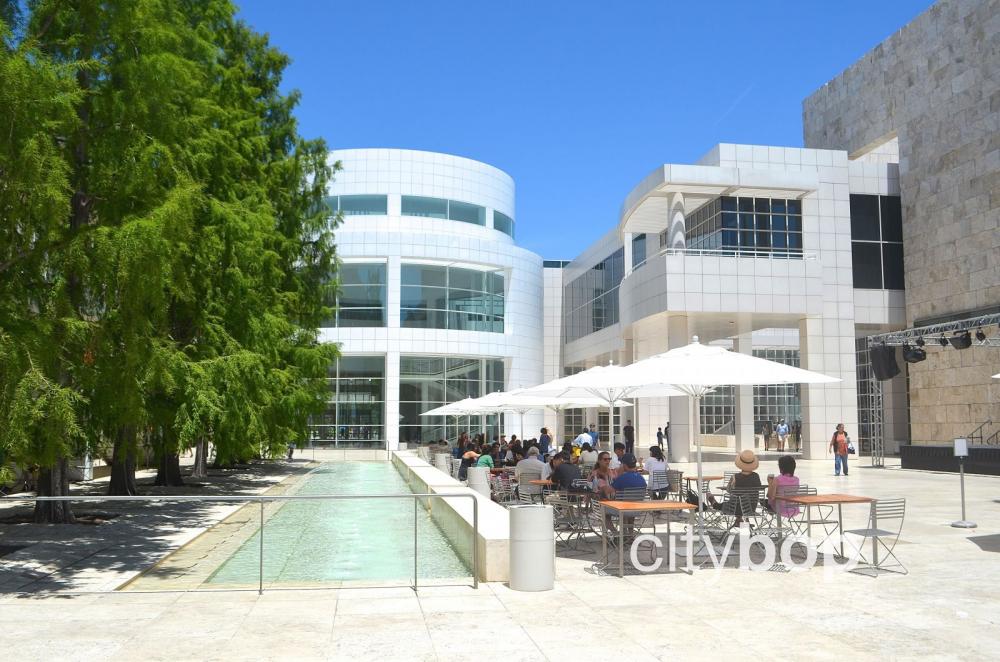 Get refreshments at the coffee cart in the Central Courtyard and sit at a table by the fountain. 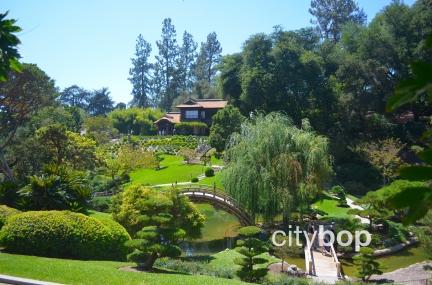