Santa Monica Pier is one of LA's top attractions.

This historic pier bustles with activity, and has an amusement park, video arcade, carousel, aquarium and restaurants.

Access to the pier is free, but tickets are required for the Pacific Park amusement park, ferris wheel, carousel, and aquarium.

10 best things to do at Santa Monica Pier

1. Ride the historic carousel housed inside the Looff Hippodrome, the oldest building on the pier.

The beautiful Looff Hippodrome has survived storms and demolition attempts, but is miraculously still standing. The carousel was constructed in 1922 by the Philadelphia Toboggan Company for the Venice Pier.  It was relocated to Santa Monica Pier in 1947, and has 44 horses, 2 sleighs, a rabbit and goat.  Check ticket prices.

2. Visit the fun Pacific Park amusement park, with a rollercoaster and ferris wheel. 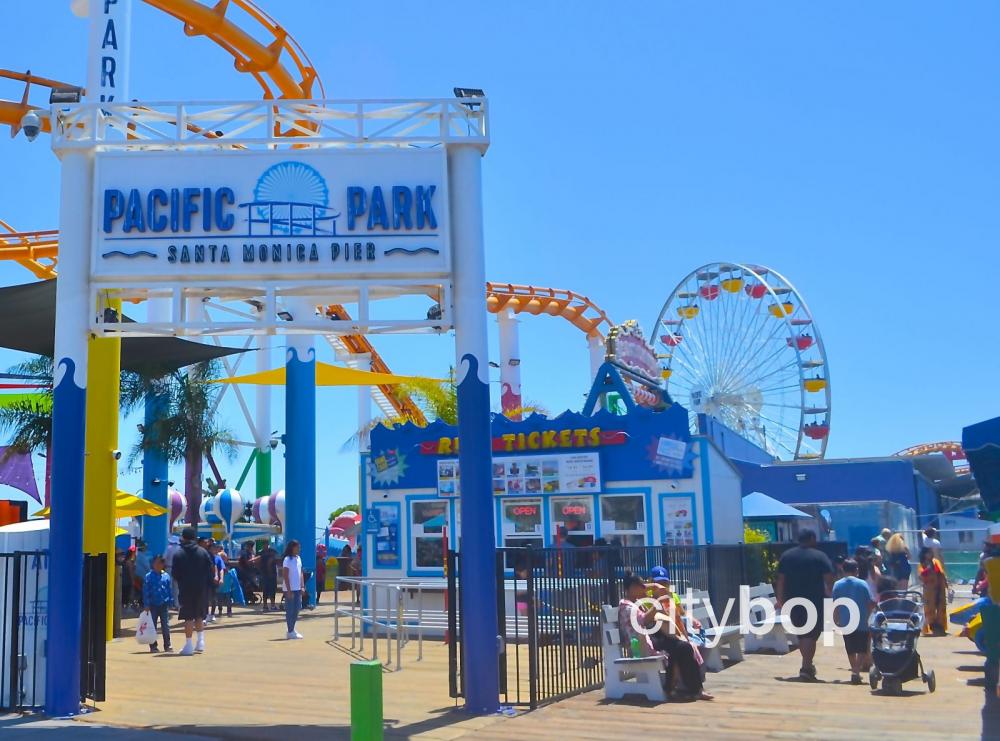 The two-acre Pacific Park on the Santa Monica Pier, is intended to capture the glory days of vintage seaside parks, with a rollercoaster, ferris wheel, carnival rides, bumper cars, a swinging ship, and rides for little kids. Check ticket prices for rides. 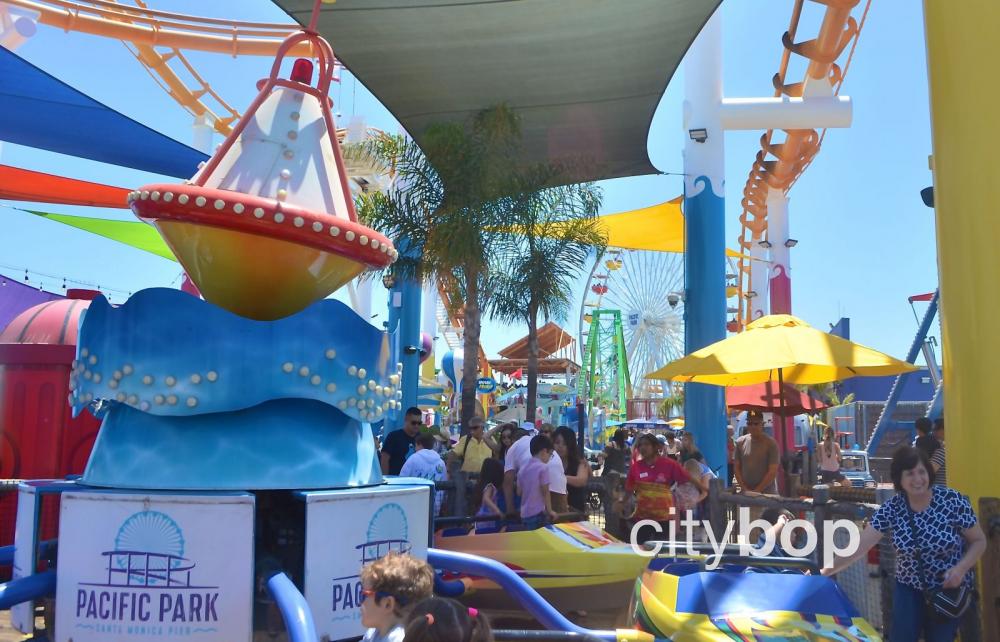 In the early 20th century, many Southern Californian piers had popular amusement parks, however Santa Monica has the only remaining amusement park on a pier on the West Coast!

3. Play pinball machines, air hockey and skeeball at the Playland Arcade, adjacent to Pacific Park (on the left below). 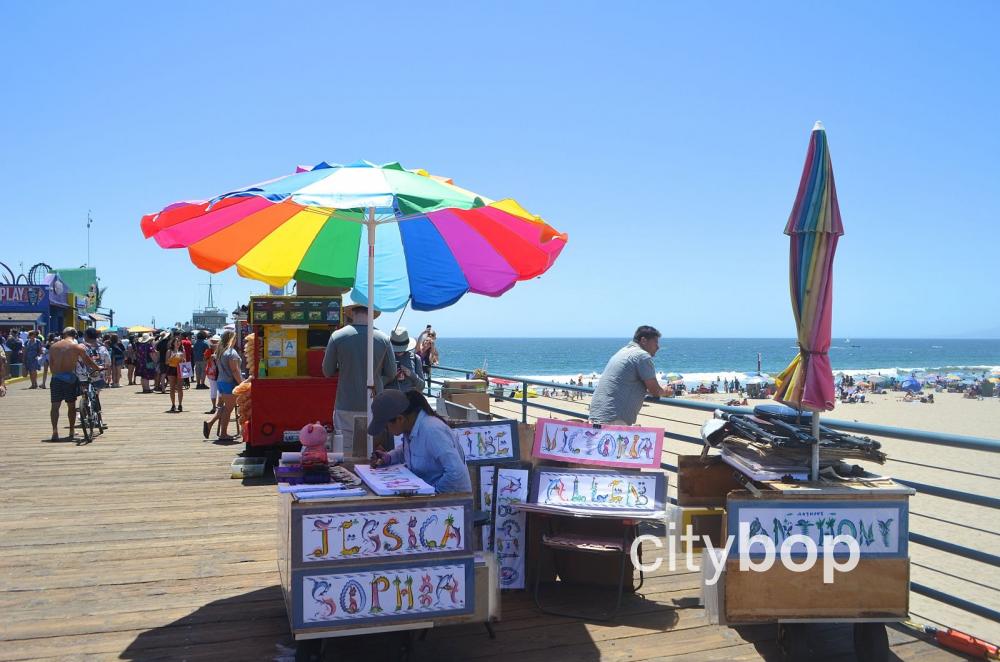 4. Watch students fly through the air at the Trapeze School, next door to the Playland Arcade.

5. Visit the Heal the Bay Aquarium on the lower level of the Santa Monica Pier.

See touch tanks with hermit crabs and sea urchins, a kelp forest, and aquariums full of jelly fish and sharks. Check admission (kids under 12 are free).

6. Stroll along the 1,600 foot municipal pier for glorious views of the ocean and mountains, and see the famous End or Route 66 sign. 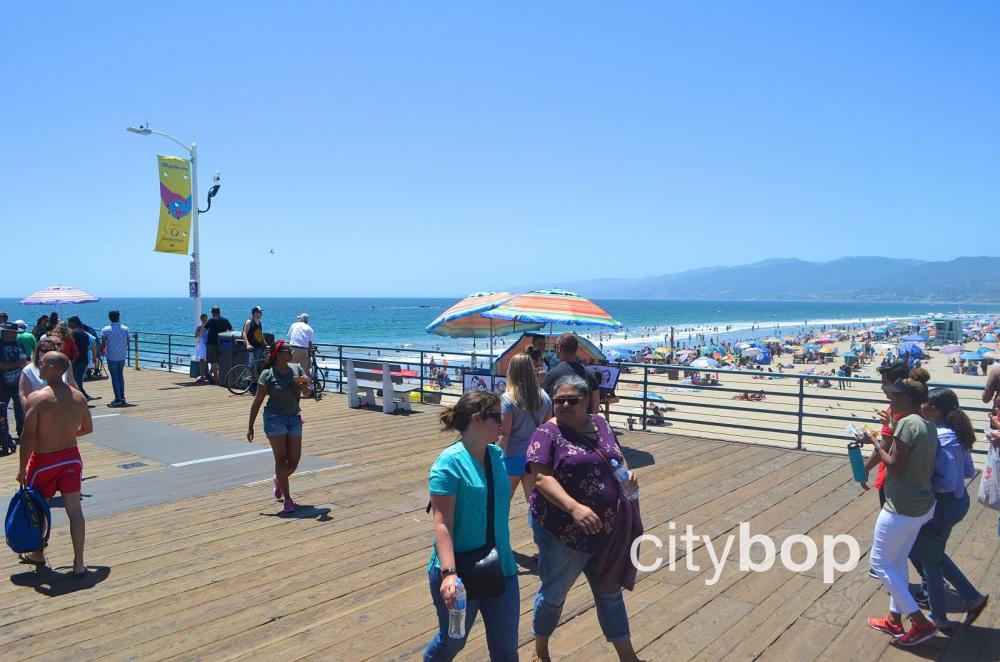 7. Pick up some fishing gear at the last stop on Route 66.

The Route 66 Last Stop Shop is at the end of Santa Monica Pier, and sells Route 66 souvenirs, and bait and tackle.

8. Choose from a large selection of fast food vendors along the Santa Monica Pier. 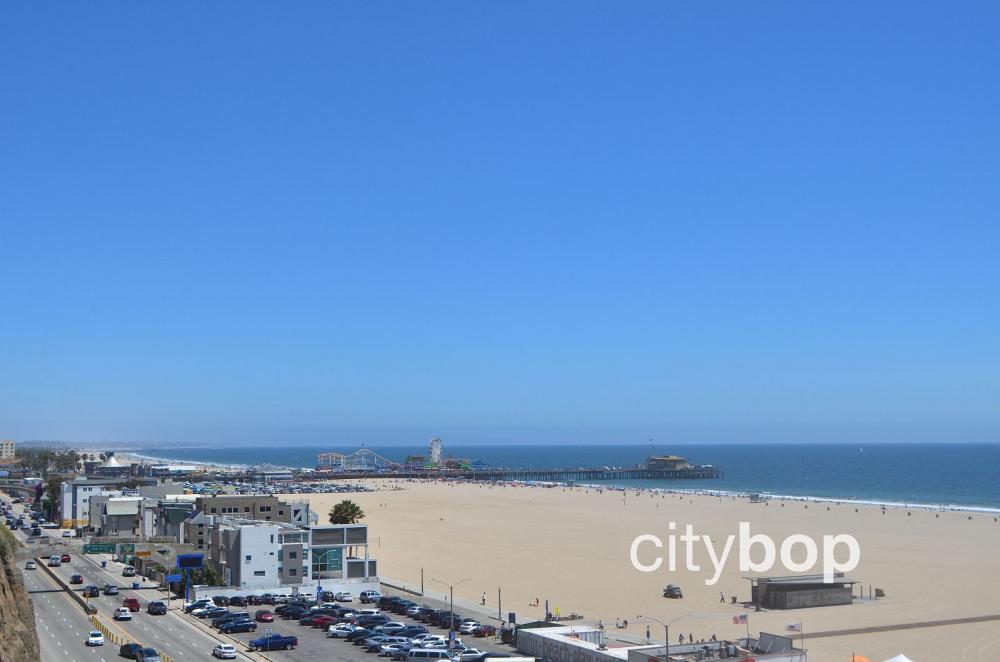 The pier's iconic ferris wheel is visible from miles away, and is an enchanting place to visit at night when illuminated by 174,000 LED lights. It's also one of the most instagrammed placed in LA.

Learn about the fascinating history of the Santa Monica Pier.

The Santa Monica Pier had humble beginnings.  In 1909 the 1,600-foot municipal pier was constructed to deposit treated sewage in the ocean. This practice ended shortly thereafter, and the pier became popular for fishing.

In 1916 entrepreneur and renowned carousel maker Charles Looff constructed the Looff Pleasure Pier on the south side of the city's municipal pier.  The first attraction was an ornate carousel housed within the Looff Hippodrome, designed in a flamboyant moorish-byzantine style.  Looff's new amusement park grew to include a wooden roller coaster named the Blue Streak Racer, an Aeroscope Ride, Bowling and Billiards Room, and fun house.

Charles Looff died in 1918, and his son sold the pleasure pier to the Santa Monica Amusement Company in 1924.  They replaced the rollercoaster with a faster one known as the Whirlwind Dipper, however their crowning achievement was the construction of the 15,000 square foot LaMonica Ballroom.  This ushered in a glamorous new era of big bands and dances, and was the biggest dance venue in the West that could accommodate 5,000 people.  The massive building had a dozen minarets that were illuminated at night, and it was designed to look like a Moorish palace.

During the 1930s Depression, the golden age of seaside amusement parks was over, and the rollercoaster and rides were closed or demolished.  The LaMonica Ballroom was utilized at different times as a jail, convention center, and lifeguard headquarters.

A local sailor named Olaf Olsen also became the inspiration for the world famous Popeye cartoon during these Depression years.  He'd retired from the US Navy and ran fishing charters off the Santa Monica Pier.  Olsen provided 10% of his catch to poor families during the Depression, and was also instrumental in preventing commercial net fishing off the coastline.  This larger than life figure regaled kids with fabulous tales of his travels, and eventually caught the attention of local cartoonist Elzie. C. Segar. The rest is history.

The pleasure pier was purchased in 1943 by Venice banker Walter Newcomb, and in 1947 he relocated a carousel from the Venice Pier to the Santa Monica Pier to replace the Looff Carousel.  Walter Newcomb died in 1954 and his wife Enid Newcomb was left in charge.  That same year Enid encouraged some family friends to open the Playland Arcade. The LaMonica Ballroom was converted into a rollerskating rink in 1958 but was demolished in 1963.

The Newcomb family finally sold the pier to the city in the 1970's, but by the 1970s the pier was not in great shape and was under threat of demolition.  There was even a proposal to demolish the pier and replace it with a bridge to a resort on an artificial island.  Locals campaigned to save the Santa Monica Pier and Proposition 1 was passed to prevent it from ever being demolished.  Two key supporters were Paul Newman and Robert Redford who had starred in the 1973 movie The Sting, with scenes filmed at the pier.

There was a devastating storm in 1983 that destroyed a third of the pier, but the community again rallied to ensure it was saved and rebuilt.

In 1996 the Pacific Park finally opened, restoring the pier to it's former amusement park glory of the 1930s complete with a rollercoaster and other rides.

What's near the Santa Monica Pier? 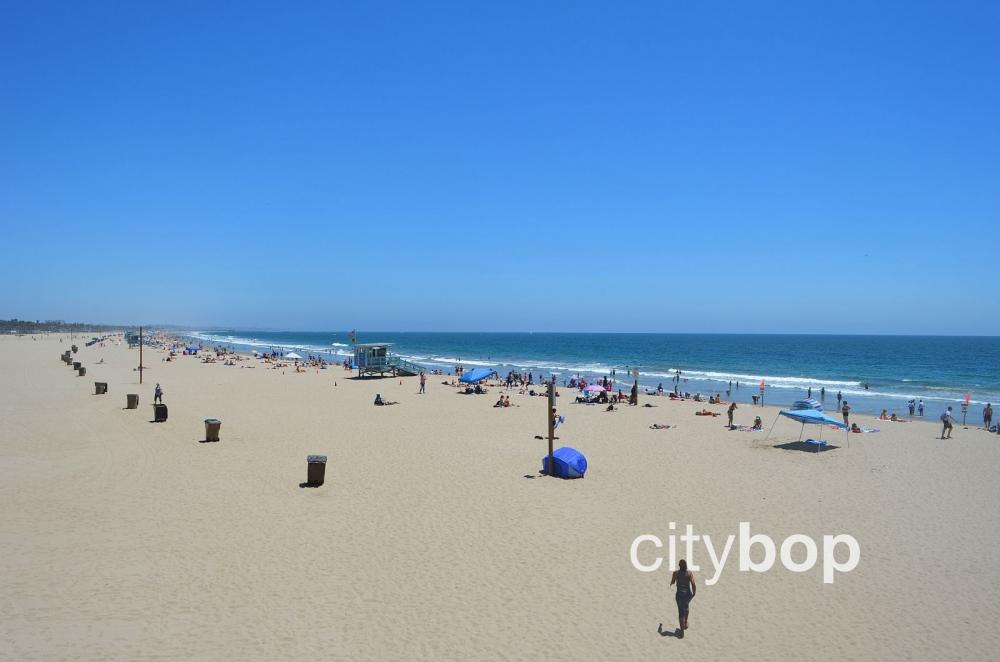 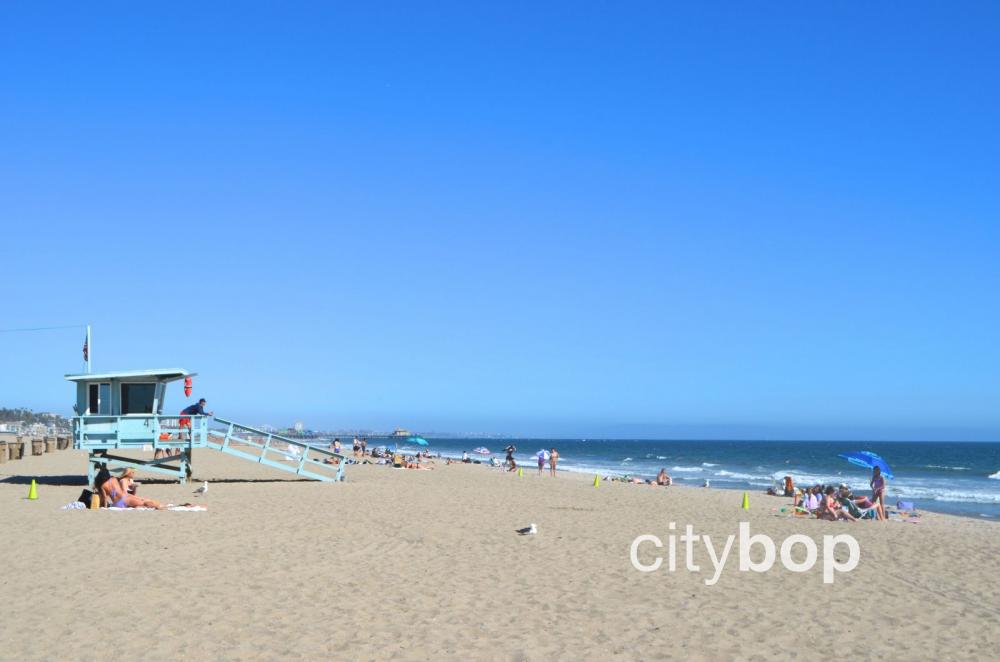