Take a peaceful walk along the footbridges and pathways at the Venice Beach Canals.

The Venice Beach Canals are a few blocks from Venice Beach in a quiet setting, and are a wonderful respite from the hustle and bustle of Venice Beach.

If traveling by car, start at the corner of Dell Avenue and 28th Avenue, then drive north over Dell Avenue across four narrow bridges. Dell Avenue (one way) is the main street that runs directly through the canals.

If you wish to explore the canals on foot, park outside the canal area and walk in. The easiest parking lot is on the corner of Dell Avenue and S Venice Boulevard.

Unforunately there are no boats available to rent.

5 best things to do at Venice Beach Canals

1. Stroll along waterfront pathways, and cross nine charming footbridges at the Venice Beach Canals. The canals are laid out in a grid, with two north-south canals, and four east-west canals, amounting to roughly 2 miles of waterfront paths. 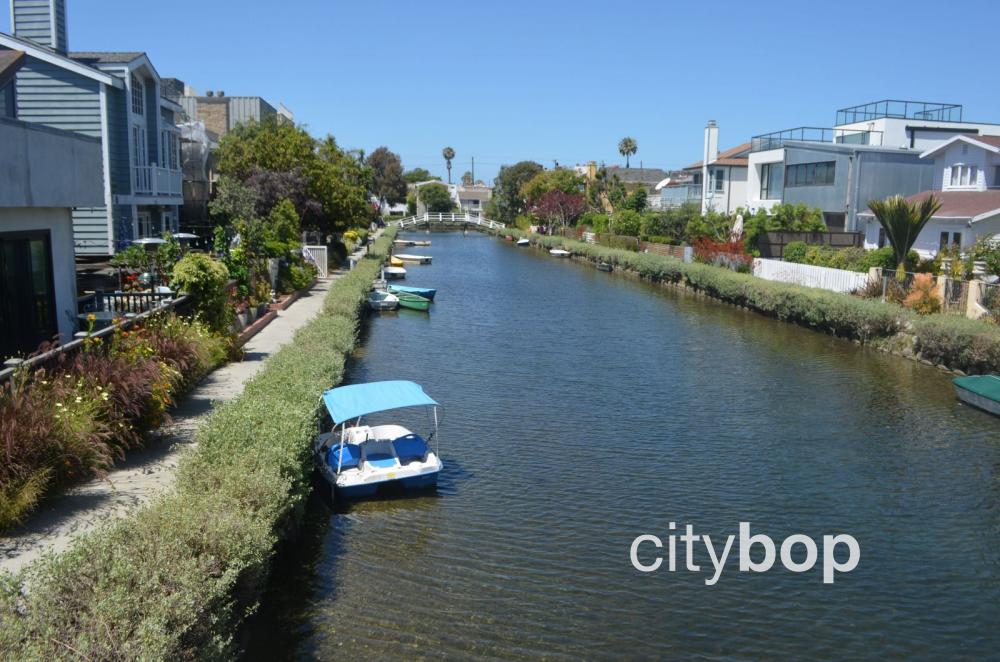 2. Drive across the four arched bridges on Dell Avenue (one way).  The speed limit is only 5 miles per hour, and there is no-where to stop and park, so the drive will go by in a flash!

3. Explore this charming residential neighborhood with historic homes and gardens. The homes surrounding the Venice Beach Canals were listed on the National Register of Historic Places in 1982, and have a wide variety of home styles ranging from vintage to modern. These gorgeous homes are much in demand, and have terraces and patios overlooking the canals, with beautiful gardens.

4. Take your kids to the playground at Linnie Canal Park, overlooking the canals, with slides, swings and climbing equipment.

Who built the Venice Beach Canals?

The Venice Beach Canals are located in the LA beach neighborhood of Venice, and were excavated and filled with water in 1905.

The resort town of Venice was created in the early 1900's by entrepreneur Abbot Kinney as part of his Venice as America vision.  Kinney was inspired by his travels through Venice Italy to create a planned community with a network of canals and gondola rides.

This resort town also had a miniature train, camel rides, orchestra and an amusement park on the pier with a rollercoaster.  The historic business district in Venice Beach also has Venetian inspired buildings with colonnades and ornate facades (corner of Windward Avenue and Pacific Avenue).

With the rise of the automobile the canals became less popular.  Three quarters of the canals were eventually filled in to create roads in 1929.  All that's left today is four canals traveling east-west (0.2 miles in length) and two canals traveling north-south.  One of the north-south canals empties out into the ocean every three days at Marina del Rey.