The Lan Su Chinese Garden is a tranquil oasis in Portland's downtown.

This stunning garden opened in September 2000, after 70 workers from the historic Chinese city of Suzhou spent a year in Portland creating it. Suzhou has been the sister city of Portland since the 1980s, and the garden's name is derived from "Lan" from Portland, and "Su" from Suzhou.

The centerpiece of the Lan Su Chinese Garden is beautiful Lake Zither, surrounded by stone walkways, picturesque bridges, courtyards, and open pavilions.  The 400 Chinese plant species are indigenous to China, but sourced from the Pacific Northwest.

Check out the calendar at Lan Su Chinese Garden for fun events like the Chinese New Year Lantern Viewing Festival (February), or the Autumn Moon Festival (September). If you're bringing kids, ask for a copy of the Discovery Guide, to keep them engaged.

After visiting the Lan Su Chinese Garden, you can walk to other attractions like Voodoo Donuts, Keep Portland Weird sign, and Pine Street Market.

1. Pass through the stunning entrance gate to see a Ming Dynasty home and garden. 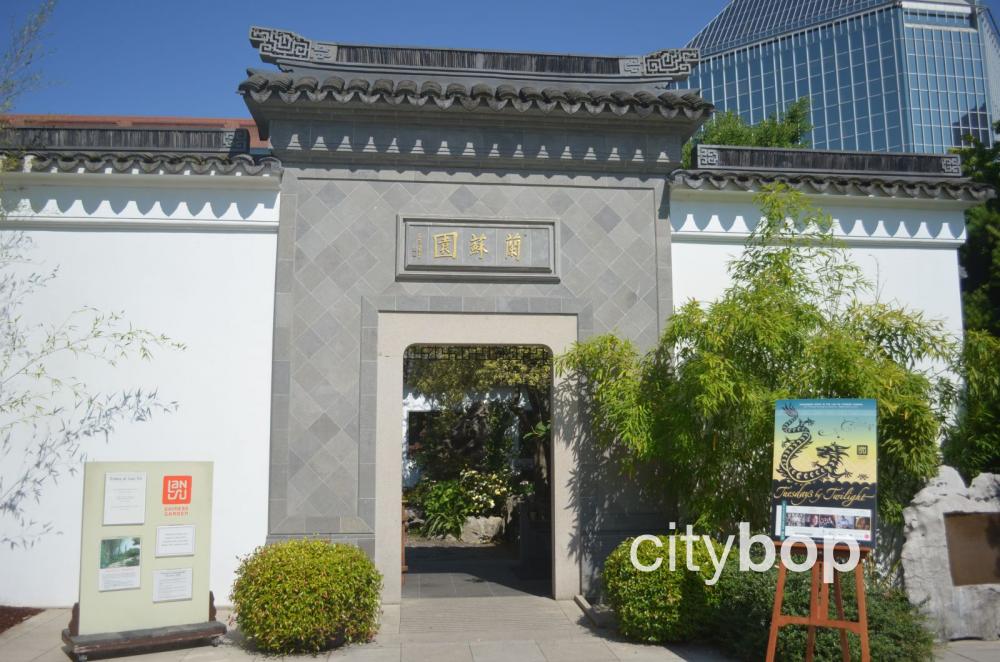 The Lan Su Chinese Garden is based on a recreation of a typical scholar's house during the Ming Dynasty (1368 to 1644).  These scholars were part of the most respected class in the Ming Dynasty, known as the "Shi" class.  The size of this gate was dependent on the scholar's wealth and influence.

2. Stand in the Courtyard of Tranquility where the scholar's guests were first greeted. 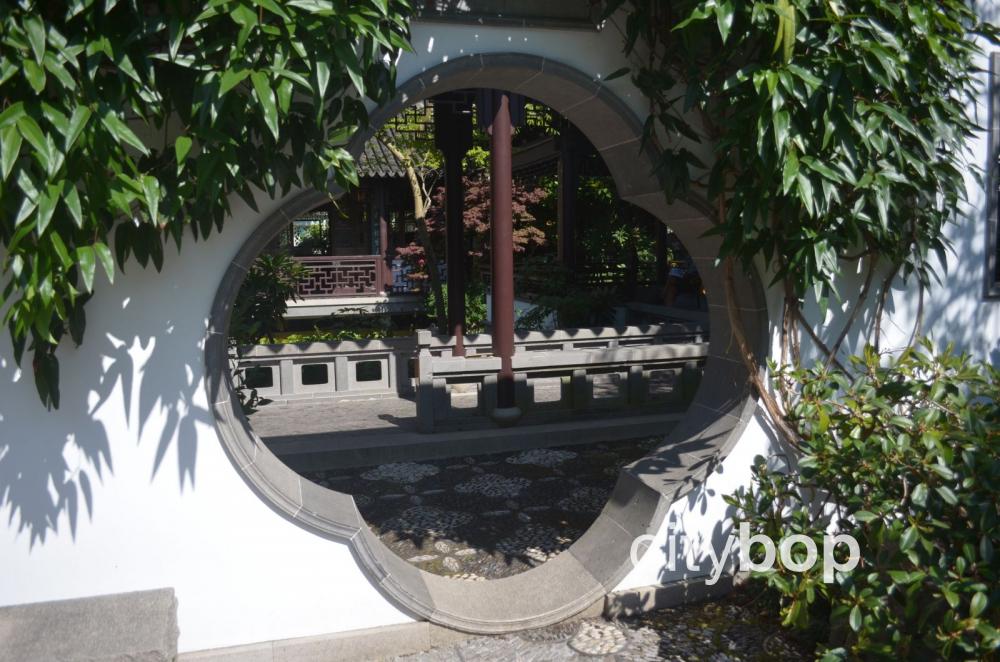 Pass through the gate to the entrance courtyard, known as the Courtyard of Tranquility.  This marks a period of transition from the busy street, to the tranquil surroundings of the scholar's home.  Look up at the inscription above the doorway that reads "Enter the Wonderland".

Can you feel something strange underfoot?  That's because you're walking on mosaic stones, turned upwards to stimulate acupuncture points and relax you.

3. Visit the "Hall of Brocade Clouds" where the scholar did his entertaining. The scholar was under constant pressure to demonstrate his mastery of the ancient Chinese arts to maintain his high social rank. This all happened inside the "Hall of Brocade Clouds" where he would showcase his skills around calligraphy, landscape art and music.  Step inside this hall at the Lan Su Chinese Garden to see demonstrations of these ancient arts. You might even get a chance to try your hand at calligraphy!

Look closely at the exquisite brocade carvings on the doors and windows of the "Hall of Brocade Clouds," representing the "Three Friends of Winter: Pine, Plum and Bamboo".  These beautiful carvings were a reflection of the scholar's wealth and status.

4. Cross the lattice bridge between the pavilions. 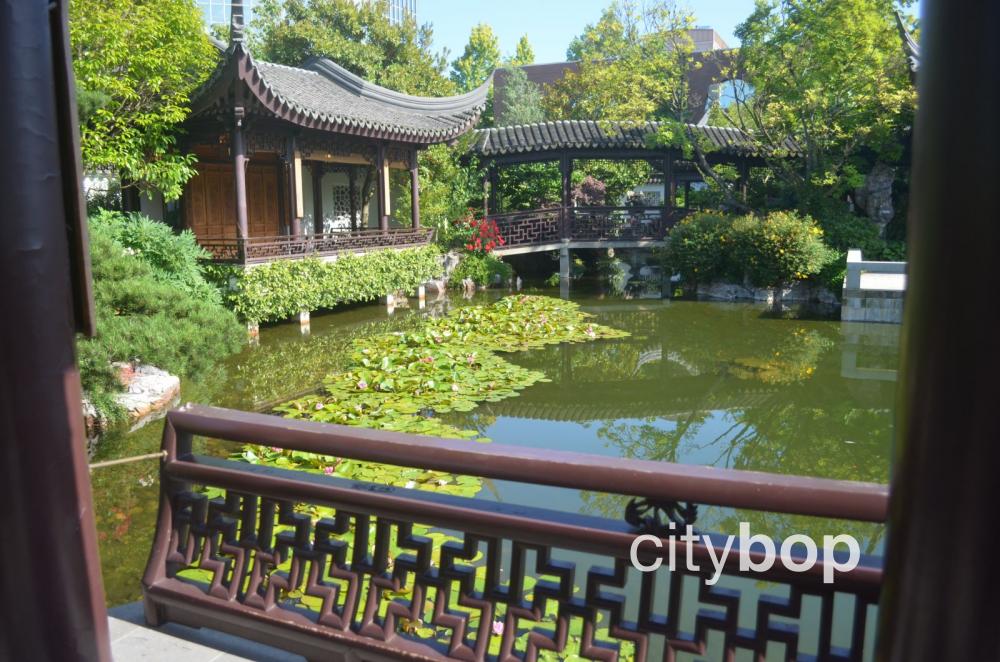 Each lattice design at the Lan Su Garden is completely different. 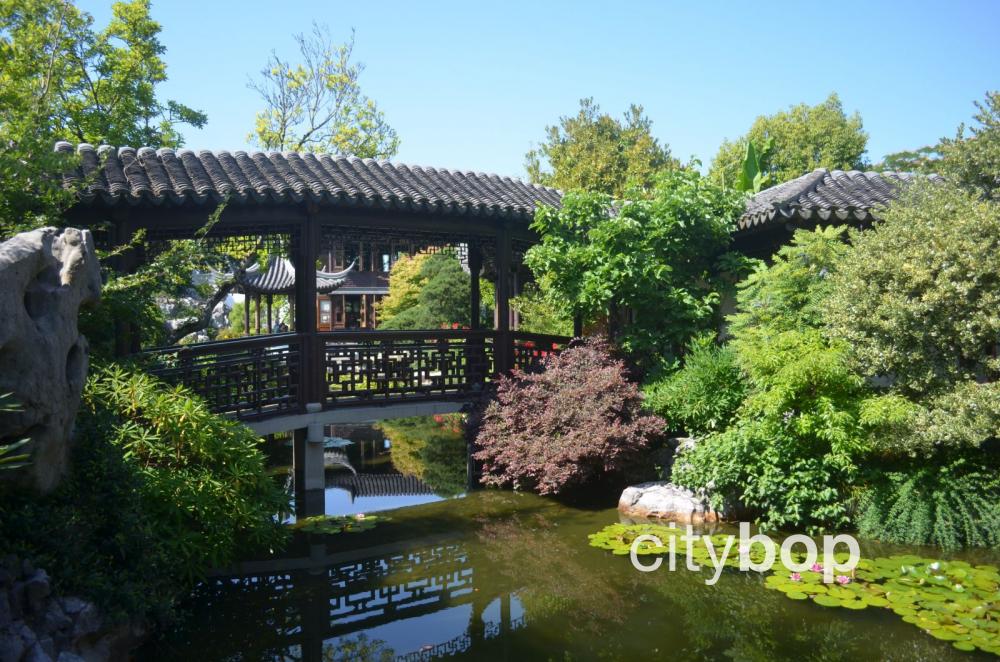 5. Look closely at the six doors on the "Flowers Bathing in Spring Rain" pavilion. 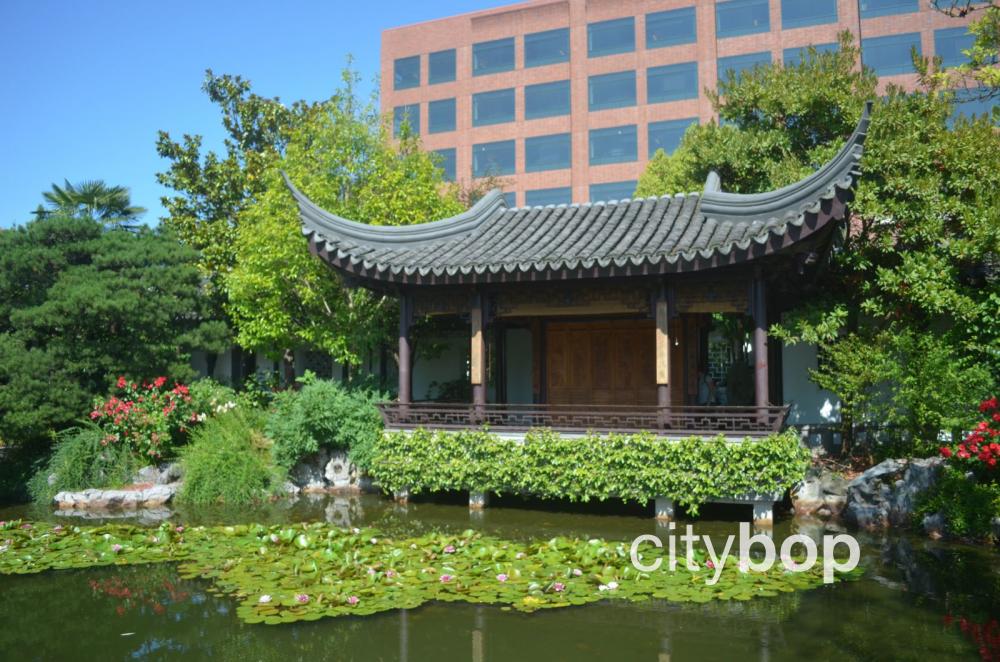 It's easy to rush through the Lan Su Chinese Garden and overlook small details, but don't miss the six ginkgo doors that depict garden scenes from Portland's sister city of Suzhou.  The back of one of the doors reads; "Most cherished in this mundane world is a place without traffic: Truly in the midst of a city there can be mountain and forest". It was written by famous Zing dynasty poet and artist, Wen Zhengming (1470 - 1559).

6. Stroll along the zig-zag bridge to the Moon Locking Pavilion. 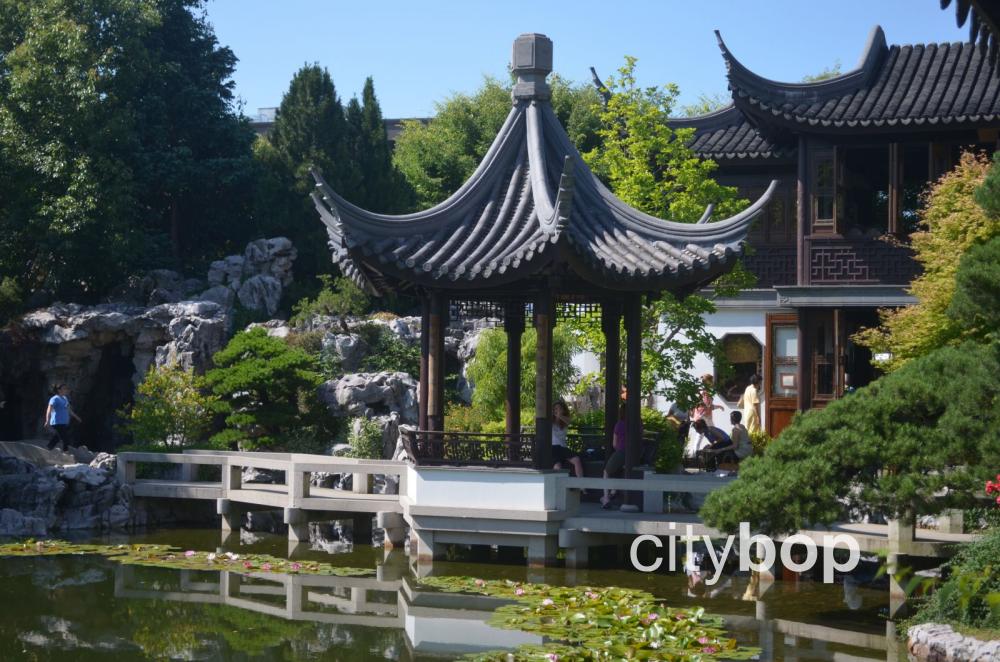 On a clear night the moon is reflected in the center of the lake at the Lan Su Chinese Garden, transforming it to a magical setting! 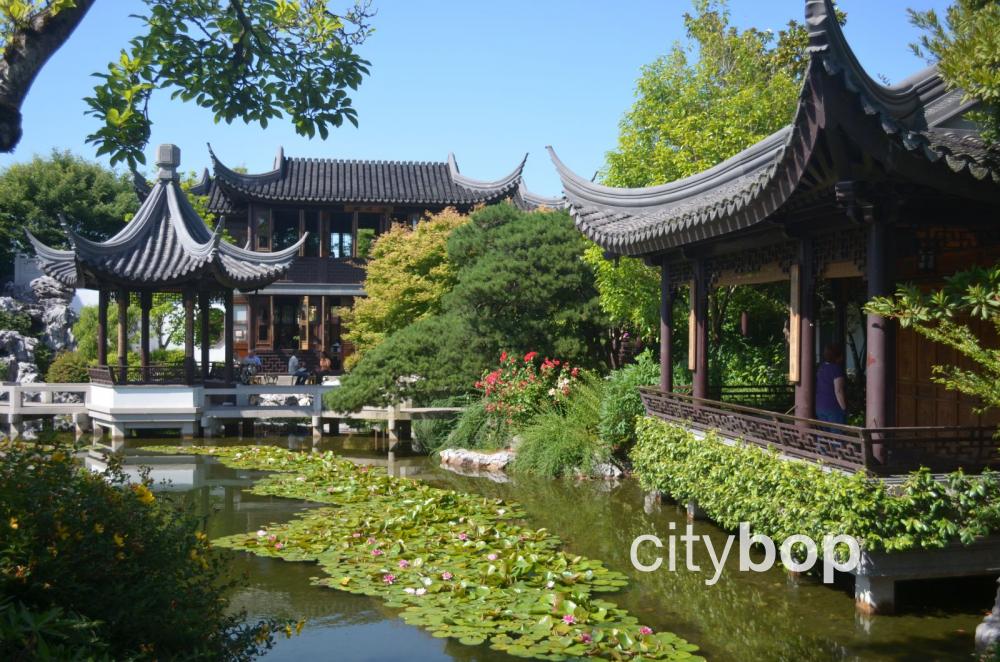 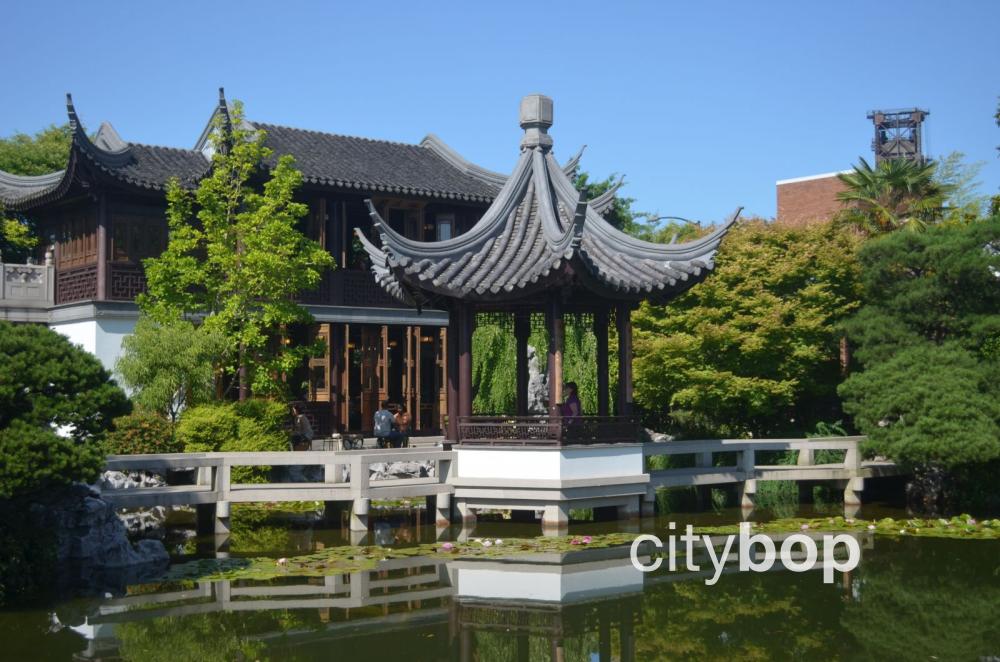 7. Admire the two-story Tea House on Lake Zither, known as the Tower of Cosmic Reflections. 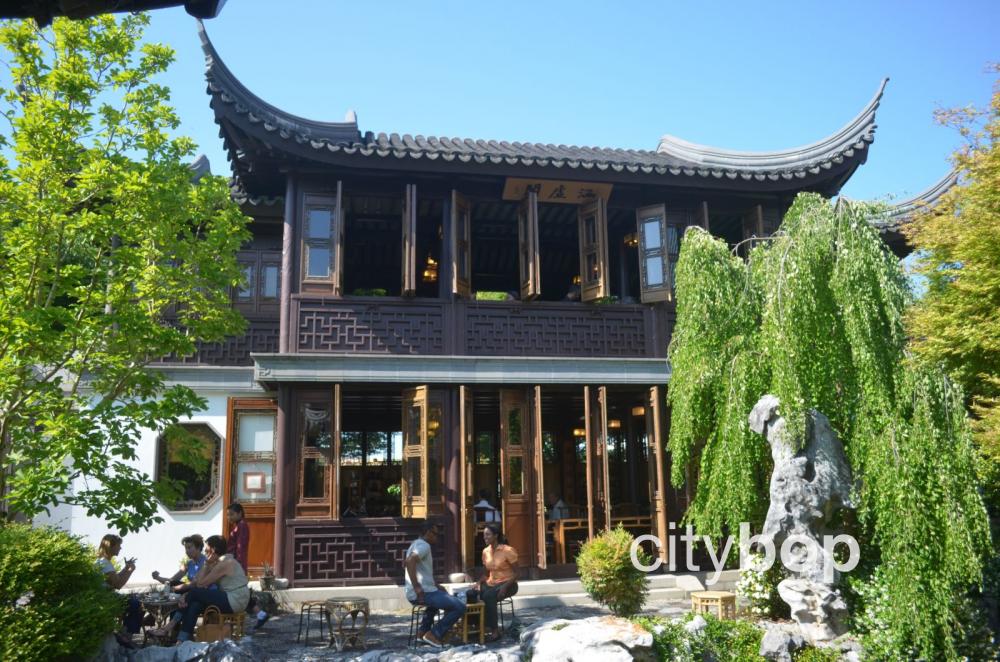 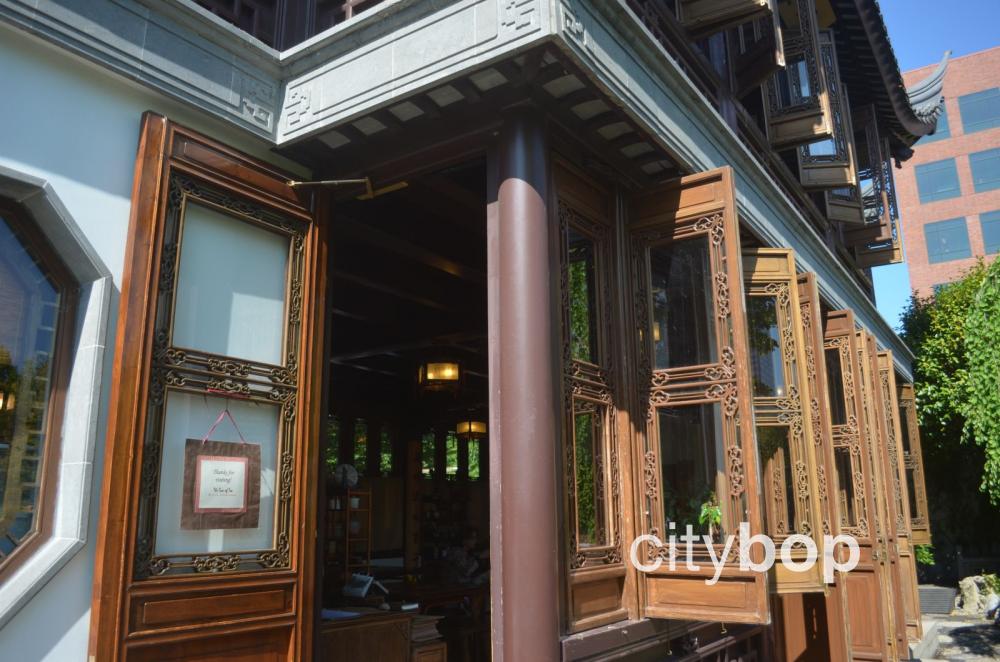 The Tea House at the Lan Su Chinese Garden is operated by the Tao of Tea, who also hold traditional tea ceremonies. This two story structure would've been the women's section of the house, where they performed household chores. 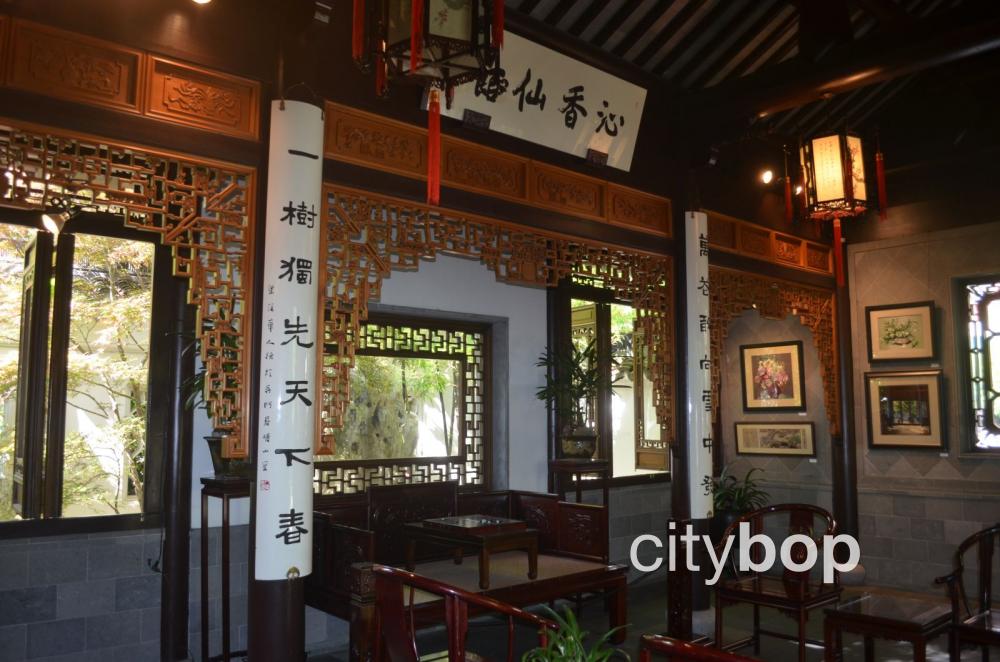 Look at the intricate lattice work, framing the doorways. 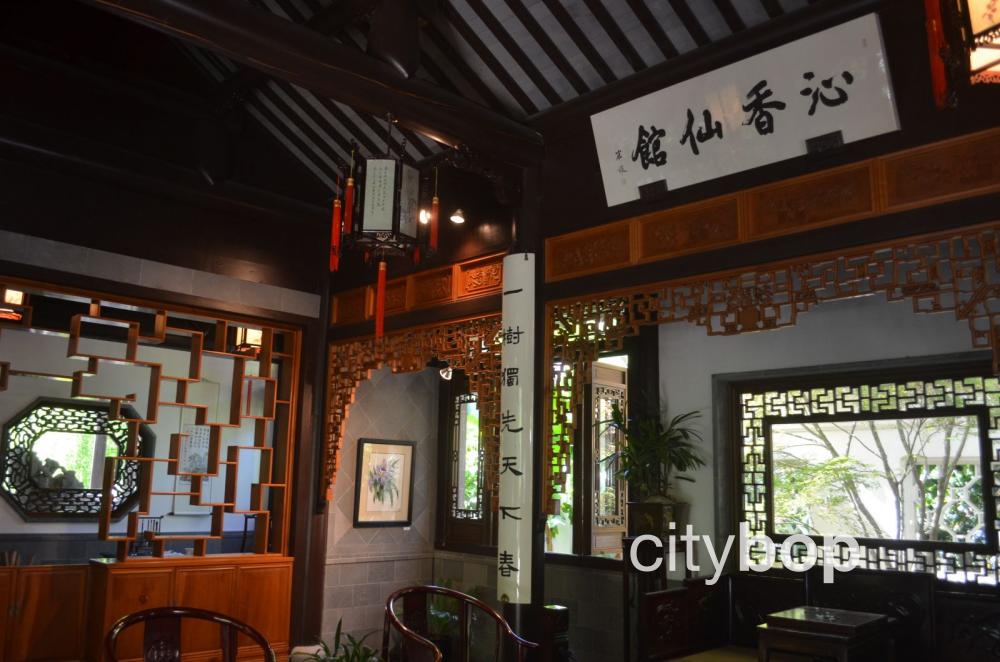 Choose from a wide selection of teas, wine and sake. 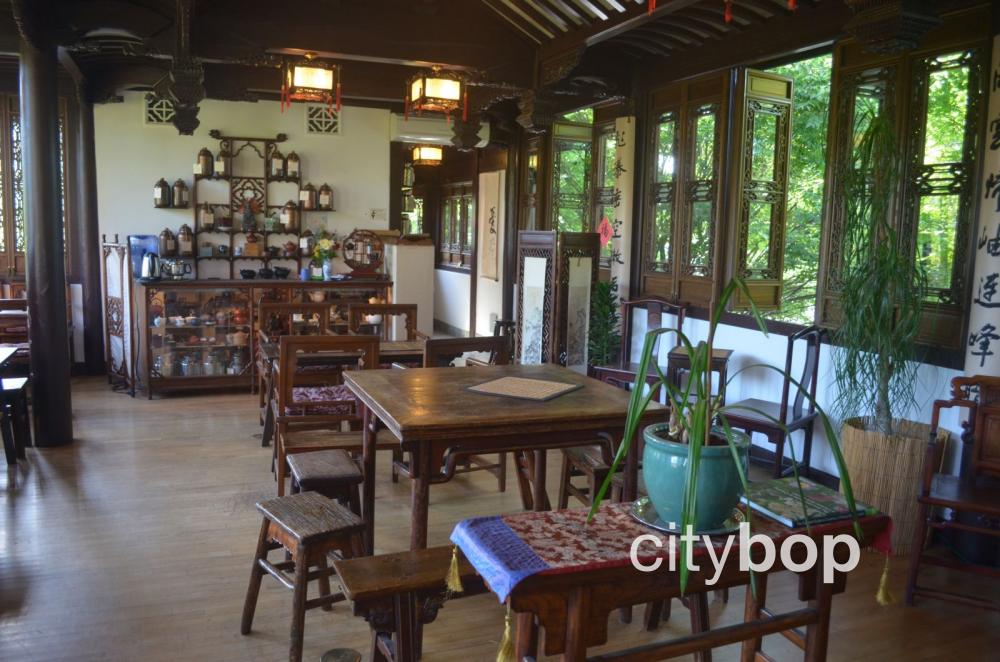 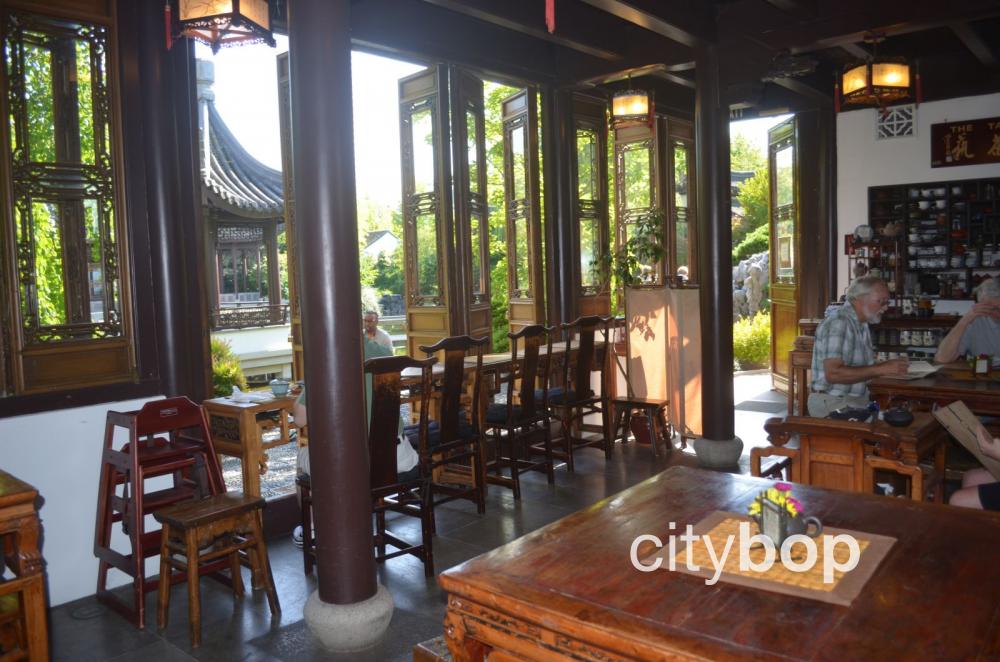 9. Can you see the pink lotuses blossoming in Lake Zither? 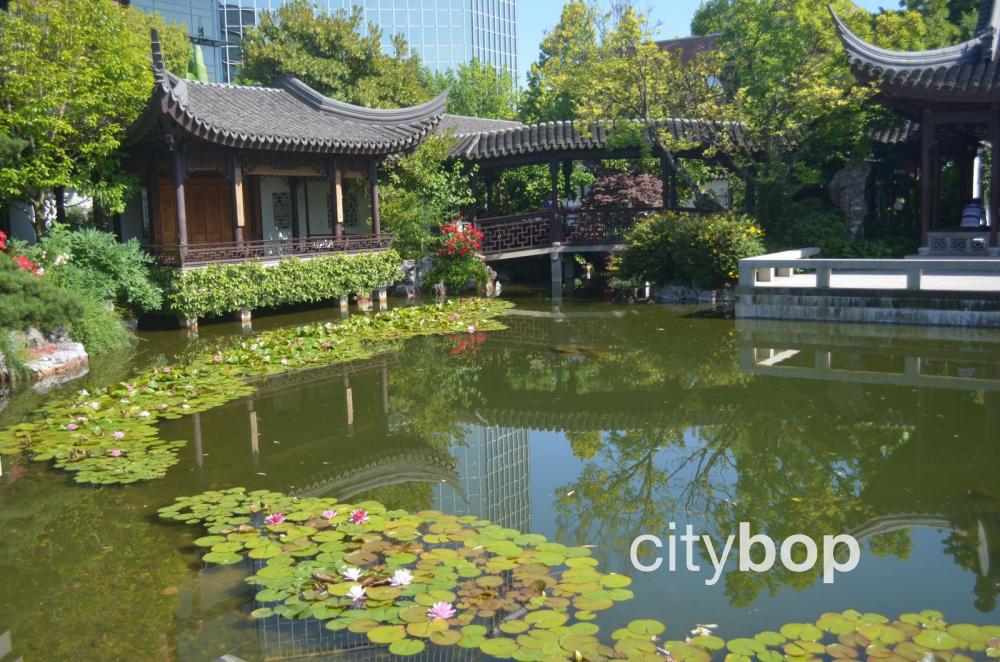 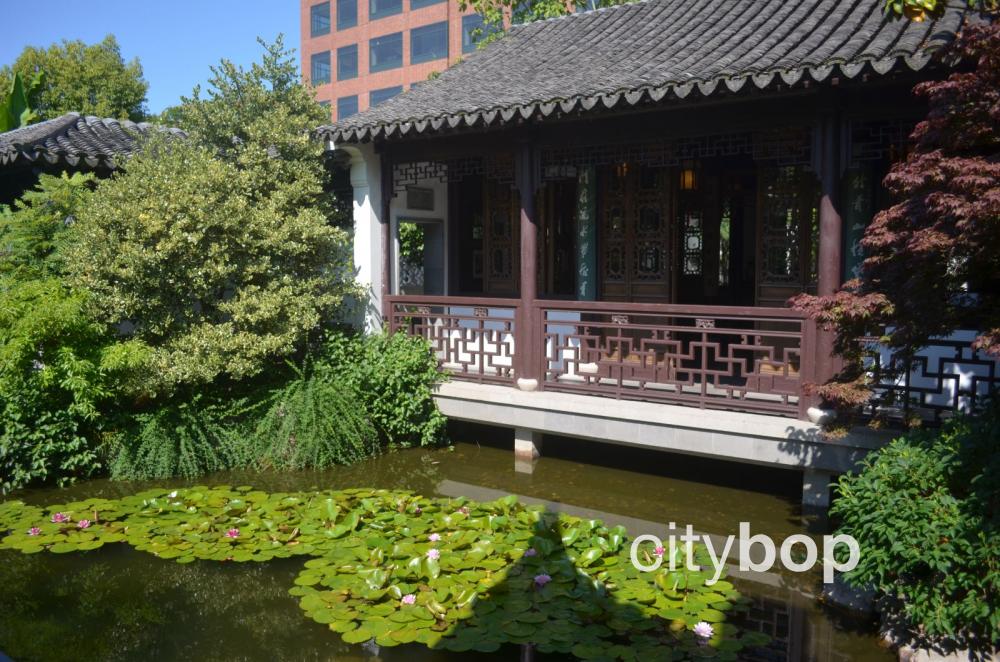 10. Look at the poetic inscriptions carved into the stone at the Rock Mountain and Waterfall. 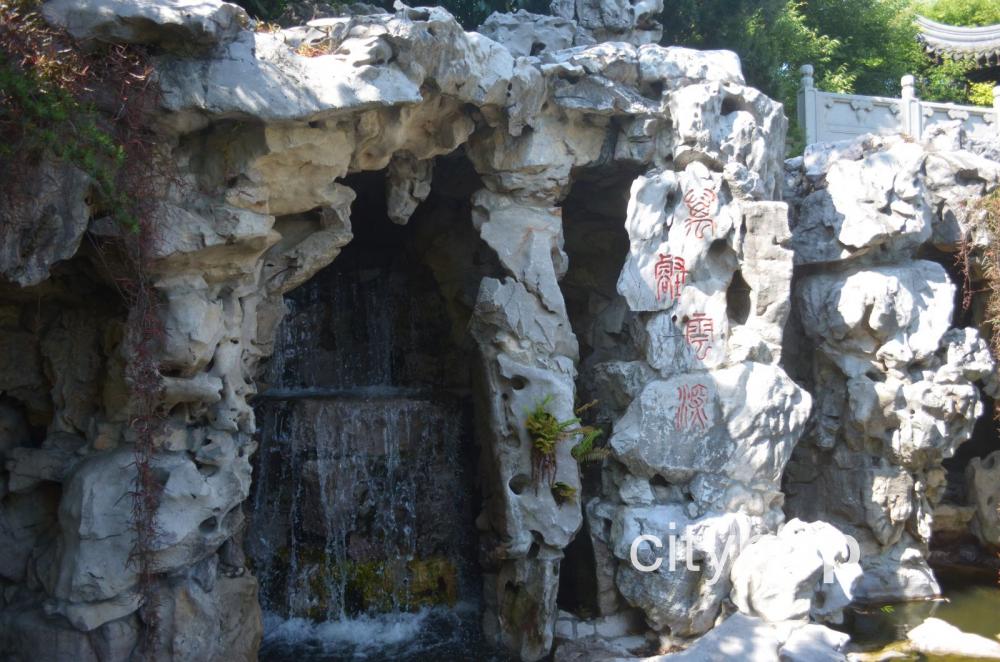 The rocks are stacked high to create the appearance of a mountain range. More than 500 tons of rock was imported from China's freshwater Lake Tai, to utilize in the Lan Su Chinese Garden. 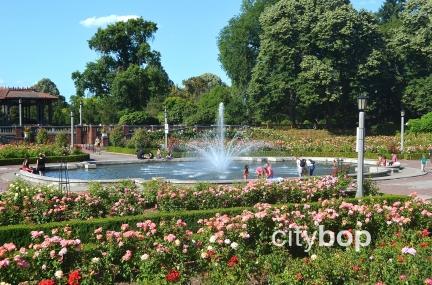 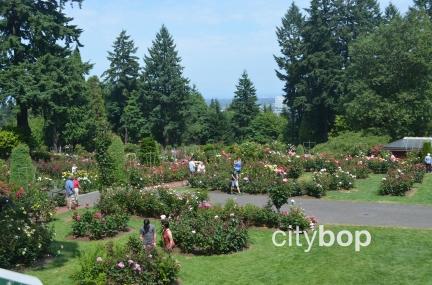 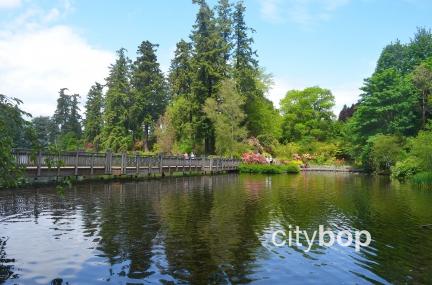 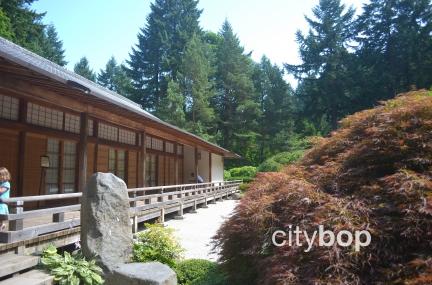 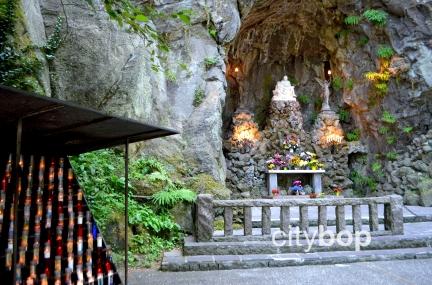